The Story Behind the Story

Author and Dartmouth professor Jeff Sharlet talks about his unique form of storytelling in his new book "This Brilliant Darkness: A Book of Strangers” 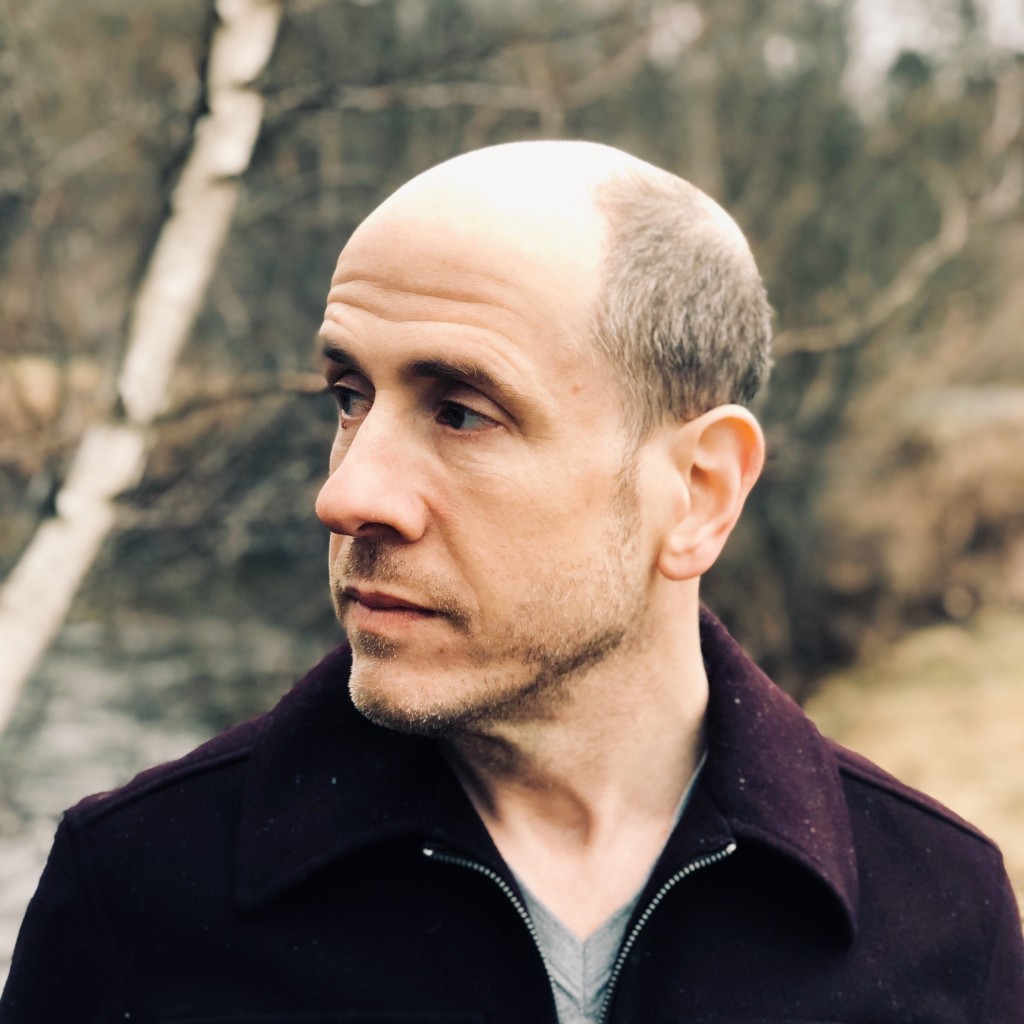 Jeff Sharlet, associate professor of English and creative writing at Dartmouth, is the best-selling author of “The Family” (made into a Netflix documentary series), “C Street” and “Sweet Heaven When I Die.”

Even the best journalism must map the surface of its subject, probing deeper to choose elements that provide traction and color for a story. In his new book, “This Brilliant Darkness: A Book of Strangers,” Dartmouth professor Jeff Sharlet takes a contrary course, letting the mundane and the overlooked have their full say. With photos and long-form captions, he blends the graphic immediacy of Instagram with the mindfulness of psychotherapy, unraveling the truths wound up in another human being by simply looking and listening. His chronicled encounters expand like a pinch of sand or a bug’s eye under a microscope, revealing the strange forms and wondrous connections that surround us in every detail of every passing moment.

Describe your process for gathering these stories. Has it changed over time?

It wasn’t so much as a process as an intuition, a feeling I had late one night, working on deadline toward a more conventional magazine story, that I felt like I’d pushed those conventional means of storytelling as far as they were going to go for me at that time. The experience is described in the opening image, of Mike at Dunkin Donuts: insomnia, loneliness, look up and see another human being and try to connect with them. My means was the camera, and the conversation that takes place around the making of an image. 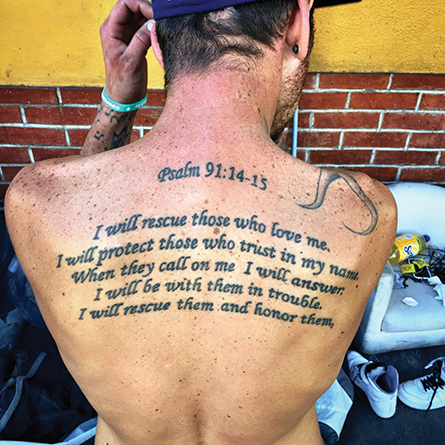 I began to think I might make a book of such stories within a few weeks of that first one. The process did evolve. I make pictures, but I’m not a photographer. I was — I am — a writer learning to write with pictures as well as words.

Your father provided some impetus for the work as a result of a heart attack?

In 2014, my father had a heart attack, and I began driving back and forth across the Green Mountains, from my home to his in upstate New York, to take care of him and to move him out of his house, which had in those years become something of a hoard, or maybe a vast archive. He was a writer, too, and a scholar, and I spent many long nights sifting through papers. I couldn’t sleep anyway — the heart attack came at a point in my writing life when all the hard stories I’d told over two decades as a journalist were beginning to catch up with me. It wasn’t that I’d seen too much; rather that I hadn’t taken account of the way such stories accumulate, the way the stories you tell become, in another sense, a story of your life as well. That’s what was keeping me up at night. In short, my life was falling apart, and the only way I knew to try to put it back together again was through more stories, the stories of everyday lives all around me. I think of it in terms of a line from my friend Leslie Jamison’s powerful book “The Recovering”: “the saving alchemy of community.” I found that twice — first, in the two years of reporting that followed my father’s heart attack, and then after my own, at 44, after I wrote what I thought then would be the book’s last line. It wasn’t, thank God. 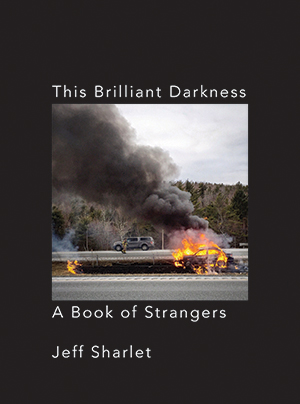 “This Brilliant Darkness: A Book of Strangers” $25, W.W. Norton & Company

Have any of the lives you’ve summarized in this way returned to you?

In one sense, all of them. I wrote this book because I learned you can’t leave the stories you tell — the ones that matter to you anyway — behind. But IRL, as they say? One of the heroes of the book is a homeless woman named Mary Mazur, the subject of a chapter called “A Resourceful Woman.” I love Mary, but she’s also — very proudly — a difficult soul. “I’m a tough bitch,” she likes to say, and she doesn’t let anybody tell her what to do. That includes making what you and I might consider healthy choices. She moves in and out of the system, and when she’s out, she’s hard to find. There are others whose families I stay in touch with. The other main hero of the book, Charly “Africa” Keunang, was killed in 2015. His family helped me write my story of his life and death. The book is also implicitly an account of my own attempt to return home to my children, from whom insomnia and the kind of reporting life I was leading were taking me too far. My daughter, who’s a little older, appears throughout the book. She hasn’t returned to me; I’m lucky to have returned to her.

Is this a new form of storytelling or is it just a variation on traditional forms? One reviewer compares you to Steinbeck.

Oh, no, it’s not new. I don’t feel so much of an affinity with Steinbeck as with those writers who’ve tried to marry pictures and words. Not so that photographs serve as illustrations for text or text serves as caption for photographs, but in a fashion that allows you to write with both. I came to this mutant genre, “literary journalism,” through James Agee’s and Walker Evans’ 1942 “Let Us Now Praise Famous Men.” I wouldn’t compare myself to either of those towering artists except inasmuch as I’m fascinated by the same equation between image and text. And increasingly technology is making it possible for writers like me to write with pictures; at the same time, I see more and more photographers alert to the possibilities of that marriage between pictures and words. 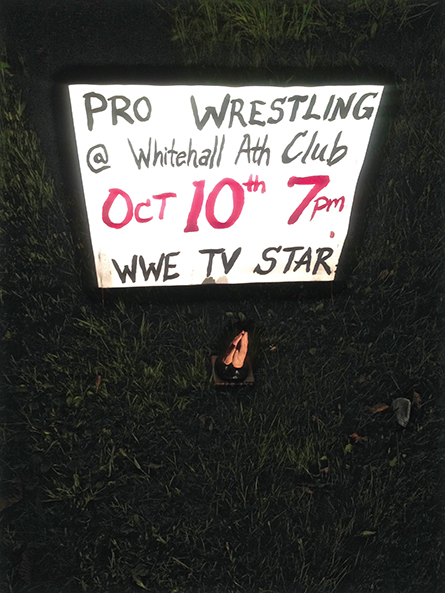 “I shined my headlight at the sign, set the hands down and gave them a twist.” — Prayer Hands

What’s your most vivid memory of such an encounter in New Hampshire?

It’s really the first one, Mike, at Dunkin Donuts in West Lebanon. I ended up making a lot of stories about night bakers at Dunkin, and the people who linger there on the nightshift, but that first moment of looking up from my coffee, seeing this night baker wearing this ornate skull shirt — which is not the Dunkin uniform — and realizing I was more interested in talking to him than in the magazine story I was writing — I was more interested in the actual everyday lives all around me than the “big story” that’s easy to sell to a glossy — that was a revelation.

Does this part of the country where you live, the New England heartland and the Connecticut River Valley, seem particularly rich for what you are doing?

It does to me. As a journalist I’ve traveled all over the US, and I know of no other region that is so much itself — so relatively unhomogenized, so particular to its own past. We speak often of Southern regionalism, and that’s powerful and fascinating, but get off the highway in New Hampshire and Vermont and start talking to people and you’ll find the antidote to so much of the sameness of contemporary life. It may not be as visible as it is in some other parts of the country, but I think it may run deeper.

How long do you plan to continue doing it?

I don’t know. I’m working on another more conventional magazine story now, and a new book that includes images but not like this. At the same time, I continue to make these stories. Even traveling around on book tour. So far, they’ve sustained me. I guess I’ll keep making them until they don’t.