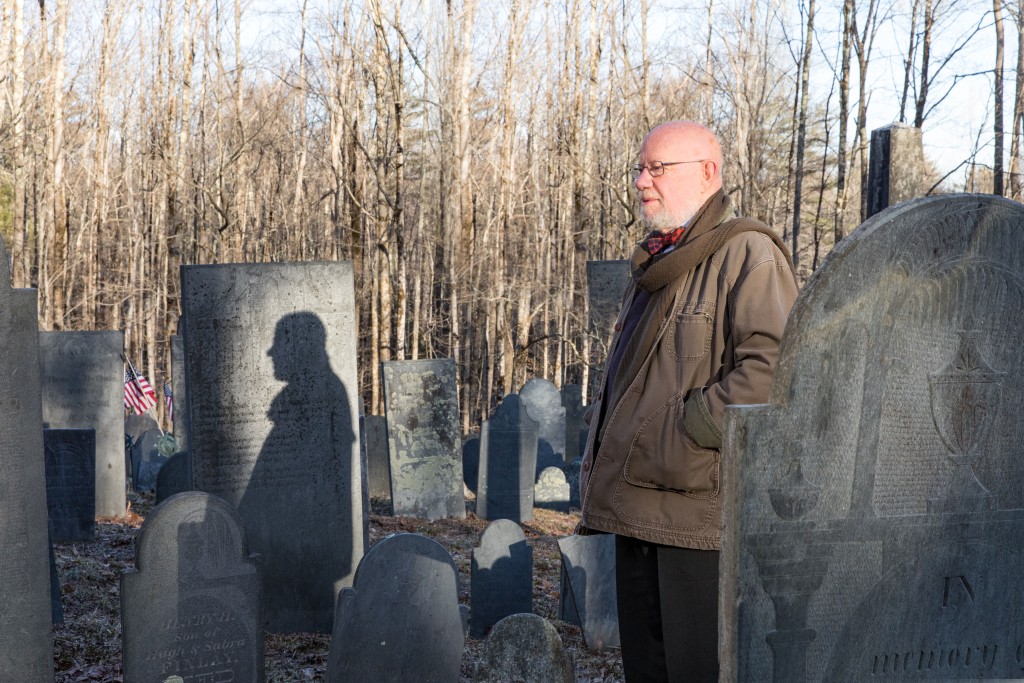 Fritz Wetherbee at one of his favorite haunts, the Acworth cemetery.
Photo by Kendal J. Bush

Fritz has entertained and informed New Hampshire audiences for more than half a century. He has written for newspapers and magazines, done radio commentary and reports, and made films and television shows about his home state. Few people know more about the Granite State. And besides, he is good at what he does. Fritz has been honored with three Emmy Awards. Last year he was given the gold for Outstanding Achievement as On Camera Talent in the whole of New England for his work on “New Hampshire Chronicle.” On top of that, he is a prolific writer on all things New Hampshire.

In the Elm Street Cemetery in Milford, a gravestone tells us that Caroline Cutter,  the woman buried there, was “murdered” by the deacons of the local Baptist Church.

In Washington, the gravestone of Fred Chase is incised with a communist “hammer and sickle.” In Lebanon, New Hampshire, there are two tombstones with “swastikas” carved on them. Washington also has a tombstone for “Samuel Jones Leg.”  Yeah, they had a funeral for a leg.

Also in Washington, there is a large sphere carved from granite. The name carved beneath the sphere is “Ball.”

In the graveyard behind the Surry Town Hall, there is a stone to “Ichabod Crane.” Not the Sleepy Hollow guy but rather a town selectman who died in 1866. Grabs your eye nonetheless.

I moved to Acworth because of an ancient cemetery here. I first came to do a story about a body stolen from the grave there.

The corpse was that of 43-year-old Bezaleel Beckwith, who died on Halloween 1824.

Couple weeks later, a local farmer named James Wilson Jr. disinterred the corpse and drove it across Vermont. There he sold it to the medical school in Castleton.

Acworth folks knew Jimmy Wilson did the dastardly deed because he was arrested for drunkenness on the streets of Castleton. Everyone in Acworth knew he was too poor to purchase any booze.

Jimmy was brought back to Acworth, but Bezaleel’s body was never recovered. So charges were never filed. However, people avoided Jimmy Wilson for the rest of his life.

Incised on the marker:

This stone tells the death of Bezaleel Beckwith
Not where his body lies, he died Oct 31, 1824, AE 43
The thirteenth night after his body was stolen from grave …

Erected by the friends of the deceased,
In Acworth in place of one destroyed
by some ruthless hand in Apr 1853

That day I first visited Acworth I discovered a property for sale just up from the graveyard.  I purchased the house and moved in. Been here 18 years now.

In the same cemetery as the Bezaleel Beckwith stone, you will find the graves of the McCollom family. Four children and the father all died in the spotted fever epidemic of 1812. Only the mother, Jane, survived. 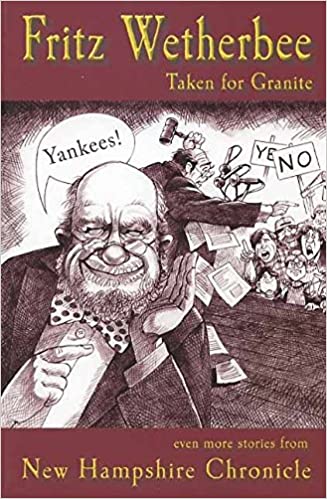 Graveyards are part of the New Hampshire landscape. Every town has at least one. But it’s not the yards that fascinate Fritz Wetherbee so much as the headstones that mark some of the state’s most peculiar or noteworthy graves. To win one of Fritz Wetherbee’s books filled with stories of Granite State history, you need find at least three of the semi-famous tombstones listed alphabetically below (including the town where the grave can be found and a hint as to the curiosity contained within it) and prove you were there with a selfie. You’ll need to do your own research to locate the specific spot (hint: Fritz’s books are a great source). And while ghosts may not hover over the gravesites, family members and others who love to walk among the spirits of the past do, so remember to be respectful in your grave undertaking.

Send photos along with the description of the gravesite plus your name and contact information to editor@nhmagazine.com by May 31, 2022 and we will randomly pick a winner from all entries received.