Look beyond Portsmouth for food, fun and more 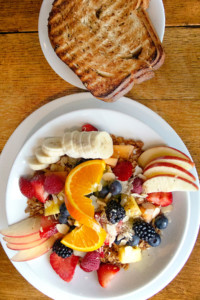 “The Hippie” from The Big Bean in Newmarket.

For a long time, summer on the Seacoast meant watching Portsmouth and its surrounding beaches swell with the summer influx of tourists. Only now, with the tourist traffic growing each year, the levees have broken on the Portsmouth scene, and art, entertainment, music, good food and more have spilled over the city limits into the surrounding communities. Or at least, that’s the easy version of this story. But one could also say that the culture and creativity was always there, from Dover to Somersworth to Newmarket, and now it’s just been given the necessary tourist overflow to grow.

What has sprung up in the tiger years of our Seacoast scene? A lot more than you might think. On the next trip there this summer, consider exploring somewhere other than Portsmouth.

With the rising rents in Portsmouth, Dover has absorbed a lot of the young professionals, families, musicians and artists. The shift makes sense — Dover is closer to the mountains and UNH than its metropolitan neighbor. With four breweries, dozens of bars and restaurants, an independent theater and two museums — not to mention an exploding art and music scene — Dover offers everything that neighboring Portsmouth does, at half the price.

Pin Up Hair Salon
263 Central Ave.
pinuphairsalon.com
Alex Tuley opened her retro storefront three years ago. “There’s a community in Dover that I think is welcoming young people and bringing in artists and culture to this area that makes it a little bit more lively than the mecca around Portsmouth,” she says, referring to all the new businesses that, like hers, have added a youthful flare to an old city. “You have to make your coolness here.” And Pin Up is cool, decked out in vintage colors from the ’50s and staffed by charismatic, tattooed women.

Tokens Taproom
284 Central Ave.
tokenstaproom.com
Erupting from Dover’s healthy geek scene, this “Barcade” offers dozens of vintage arcade games, untouched except for the addition of a cupholder, where you can place your adult beverage while you try to beat your 1985 Pac-Man score.

Chapel + Main
83 Main St.
chapelandmain.com
This farm-focused restaurant and brewery opened shortly after the Portsmouth’s Coat of Arms closed, absorbing much of its clientele and some of its staff. 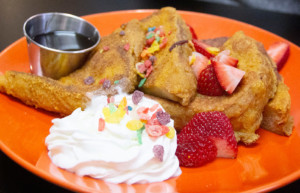 Fat Dog Kitchen
20 3rd St.
Facebook
Dover is a breakfast town, and this tiny, hollandaise-yellow kitchen next to The Strand independent theater upholds that reputation.

Woodman Museum
182 Central Ave.
woodmanmuseum.org
When you go to Dover, don’t skip the Woodman Museum. There is truly something there to entertain everyone, whether it is the extensive taxidermy collection featuring a polar bear and several moose, the original Garrison house, the torrid history of Sarah Hale’s secret affair or a dark room of bioluminescent rocks. It is easy to spend an entire day surveying the strange menagerie.

When Teatotaller owner Emmett Soldati came home eight years ago, the Somersworth downtown consisted of a blank strip of boarded-up shopfronts, a nearly empty mill building, and a struggling GE factory slated to close. “There wasn’t much to do in the downtown except buy a washing machine at Nard’s Appliance,” says Soldati of a store that also closed shortly after his return. But now? “Not a week goes by,” says Soldati, “I don’t meet a new young couple or young professional that’s like, ‘I just moved to Somersworth.’” The downtown is speckled now with new businesses aimed at young people; a developer wants to build micro-apartments for millennials. With the backing of a community and a few entrepreneurs, Somersworth is reinventing itself to be a place where young people stay.

Teatotaller
69 High St.
teatotallerteahouse.com
Seven years ago, Soldati opened up his café, specializing in locally sourced tea, breakfast pastries and fancy coffee drinks. He painted the sign neon pink and created a venue for live music, readings, and even an “ask a trans person anything” event; in fact, the Teatotaller’s focus on inclusivity has made them an LGBTQ haven. The space serves as a meeting space for the whole community, creating a platform for presidential candidates and drag queens alike. They also do all their own baking stunts. 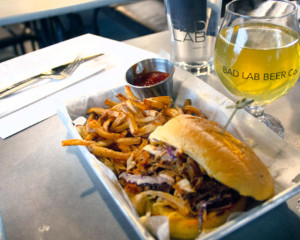 Bad Lab Beer Co.
460 High St.
badlabbeer.com
With a menu that includes kimchi and pork belly and Robert Frost-inspired beers like “Miles Before Sleep,” this brewery is well worth the drive to the quickly developing border between Dover and Somersworth.

Another small milltown on the edge of Great Bay, Newmarket became a collective of nature lovers and college students who were happy to bus the 5 miles to the UNH campus for reduced rent. Before local developer Eric Chinburg finished renovating its mills a in 2012, Seacoast locals might visit Newmarket for the music at the Stone Church, the breakfast at The Big Bean or the quirky aura of Crackskull’s café — and nothing else. Now, the chic condos and commercial space have added more than 30 small businesses and 112 apartments to the tiny town without ejecting the students and eccentrics who give the town its unique flair. With farm-to-table fare, a music venue and its own brewery, Newmarket has exactly what you need and nothing more.

Deciduous Brewing Company
12 Weaver St., Suite B
Facebook
With rustic décor and beers like “Fieldwork” and “Great Wide Open,” this husband-and-wife-owned brewery fits right in with the Newmarket vibe.

The Big Bean
118 Main St.
thebigbeancafe.com
At this colorful refuge scented by home fries, order a granola bowl aptly named “The Hippie” and listen to the latest barista-curated band.

Horseshoe Café
171 Main St.
Facebook
Don’t visit this little café because it has the best coffee in town; visit it because, despite opening only two years ago, the owner knows every customer by name.

The Stone Church
5 Granite St.,
stonechurchrocks.com
To really experience Newmarket, you have to dance your feet sore on the old wooden floors of this famous music venue. Come for bluegrass night; stay for the community.