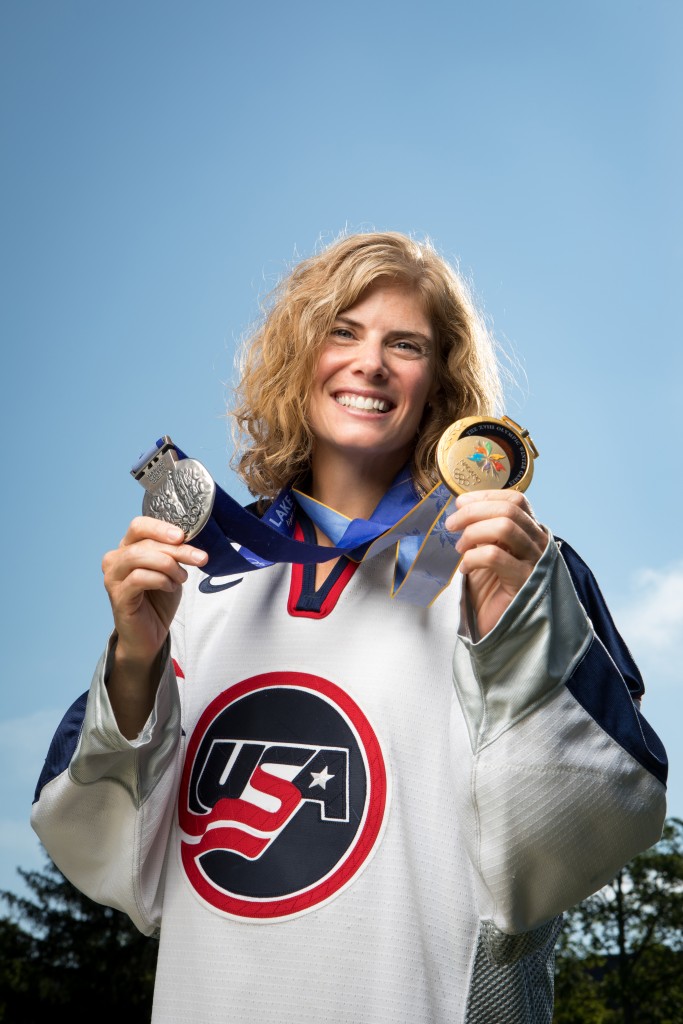 On February 17, 1998, in Nagano, Japan, a group of women from across the US made Olympic history. And they were led, in part, by a contingent from New Hampshire.

Among them was New Hampshire hockey legend Tara Mounsey. She and her teammates became the first team to capture Olympic gold in women’s ice hockey by defeating favored Canada 3-1.

For Mounsey, the road to Olympic gold (and silver, in Salt Lake City four years later) began one chilly night in her home state.

“I got into hockey through family friends who had kids a little older than me,” she says. “They invited us to a New Year’s Eve skating party outdoors — which is how you should skate in New Hampshire. It took off from there. I was probably 4-ish and it was just something I really liked.”

So much so that she started her youth hockey playing on the boys’ team — something she did until college.

“I’ve always been fortunate in terms of my ability as an athlete,” she says. “I think that was clear rather early in my life. I’ve just been naturally coordinated. But what began to separate me was the work ethic my parents instilled in me and expected from me. They said, ‘You’re going to have to work a little harder and you may not be better than other people, but that’s not the focus.’ They instilled a work ethic that has lasted a lifetime.”

“That was a distinctive award and I was honored to have received it,” Mounsey says. “That award will always be special to me, especially because it came at a time when women’s sports were still growing. I think it was instrumental in my career and in young athletes. It carried a message that you can do anything you want to if you put your mind to it.”

During those younger years on the boys’ teams, Mounsey found herself accepted by a group of teammates who had played alongside her since they were 6 years old.

“I had tremendous support,” she says. “They all knew who I was and people throughout the state knew who I was. Once in a while you’d hear comments from the other players’ dads like, ‘Are you going to let her check you like that?’ Come on. But other than that, there was never a lot of pushback. I was just one of the players rather than the girl on the team.”

Intense rivalry
The US women actually had to defeat their Canadian rivals twice in the 1998 Olympics. The two teams met first in round-robin play. Canada was up 4-1 in the third period, but the US exploded for six goals in 13 minutes to put them up 7-4. Mounsey assisted on a Cammi Granato power play goal in that important game.

Now Mounsey, a graduate of Brown University who earned her graduate degree from Boston College, is a nurse practitioner in orthopedics at New England Baptist Hospital — a career choice made after overcoming several obstacles during her time on the ice.

“I had a handful of injuries, and I encountered a number of amazing doctors and nurses and physical therapists,” she says. “It opened my eyes to a career in the medical field. I’ve been at New England Baptist for 14 years and I couldn’t be happier.”

But hockey is never far away. That 1998 team, which made history by winning the first-ever Olympic gold medal in women’s hockey, had a powerful effect on growing women’s hockey in the US. Before the win, there were 27,000 registered female hockey players in the country. Twenty years later, that number ballooned to more than 82,000. It’s something that hasn’t escaped the Concord native’s attention.

“It was a really, really special time and a special occasion,” she says. “It’s one of those things I certainly will carry with me forever. The takeaway, for me, is that those people, my teammates — I am very close with them. We keep in contact, and any time we get together, it’s like it’s 1998. We achieved a goal so powerful and instrumental in all our lives that my connection with that group of women can’t be found anywhere else.”