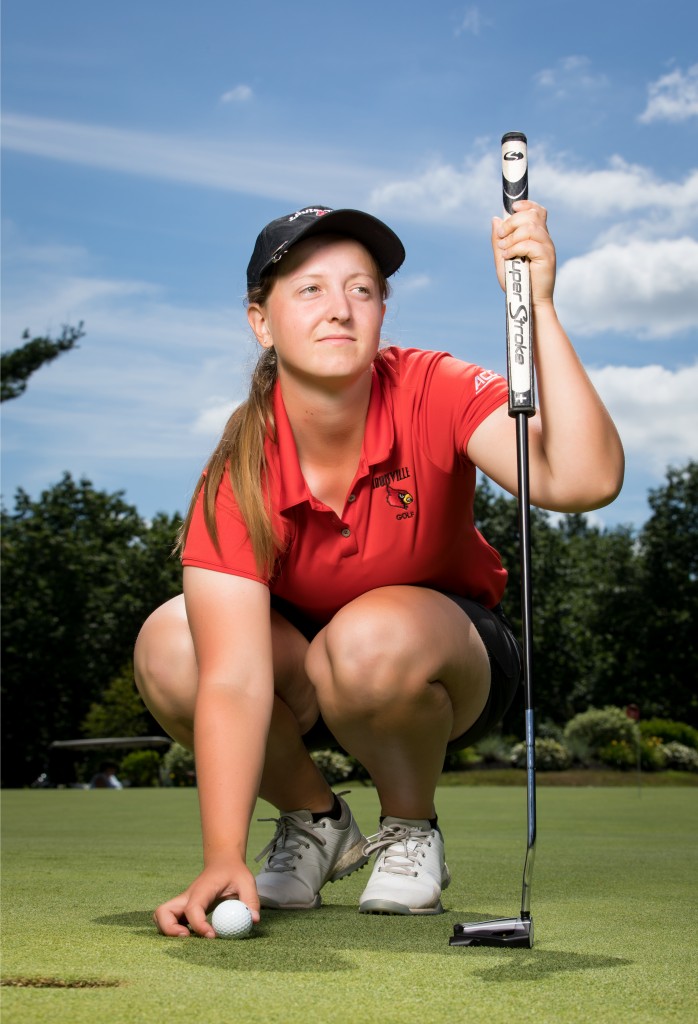 Ask Lauren Thibodeau how she felt scoring a hole-in-one and she gives a surprising answer: “Which one?”

The 20-year-old Hampstead resident/golf phenom has drained three — the first before she was 11 years old at the sixth hole of the PGA National Squire Golf Course in Palm Beach Gardens during the Optimist International Junior Golf Championship. The second was at Champions Gate in Orlando in November of 2013 — a 113-yard 9-iron.

“It’s funny, but all three have been in Florida,” says Thibodeau, a 2018 Pinkerton Academy grad. “It’s not extremely surprising because my grandparents live in Florida and I fly down and stay with them — it makes it cheaper for me to play in tournaments down there.”

The third hole-in-one took place in late 2018 at the Atlantis Country Club just south of West Palm Beach — a par-3 on the 10th hole.

“I took the wrong club and backed off,” she says. “I took another and hit it in. No one saw it go in and I was like, ‘What the heck?’”

The road to a trio of aces and a long list of accomplishments, including competing on the University of Louisville golf team, began at the Atkinson Country Club, where she took her first lesson with Mark Spencer.

“I was in a camp and played mini-golf, and I really enjoyed it,” Thibodeau says. “My mom’s colleague said that if I enjoyed it, I should take a lesson and see if I liked golf — but that I should learn the fundamentals first.”

At first blush, she wasn’t on board with spending the afternoon in a golf lesson. But, by the time she was driving home that day, she had changed her mind.

She was playing in tournaments within a couple years of that first lesson, admittedly posting some high scores, but when she was 11, things started to click.

“I started playing good nine-hole rounds,” she says. “Then I went to the New Hampshire Junior Championship. I had never shot in the 70s, and I really hadn’t played tournaments with girls older than me, but I went and shot a 77 and beat the two-time defending champion. That’s where it started, at Intervale [Country Club in Manchester]. I like that course and played it well. I’ve had a lot of milestones on that course.”

She played all four years on the Pinkerton varsity golf team, and won the New Hampshire Girls Golf State Individual Title each of those years. That’s not to say the W’s came without a few bumps. The day before playing in the New Hampshire High School Girls Invitational her sophomore year, she unpacked her clubs after a late practice to a bit of a surprise — her driver, which she had been hitting consistently and with confidence, snapped in the trunk of her friend’s car. It was a late session, and she had an early tee time the next morning. There would be no time to visit a pro shop for repairs. The solution? Adapt.

“I had another shaft in my house that would fit,” she says. “But it was stiffer, so I knew I’d end up losing 20-30 yards off the tee. I adjusted my whole plan and it worked out. It was a rainy day, but I ended up shooting a 76 or 77 anyway.”

Lauren’s laurels
Lauren Thibodeau was a four-time New Hampshire Interscholastic Athletic Association girls state champion at Pinkerton Academy — the first girl in state history to achieve the feat. The list of her wins is extensive, including a notable victory last summer when she won the New Hampshire State Amateur Championship by nine strokes with a 6-under-par 210 at the 5,505-yard Breakfast Hill Golf Club.

That ability to stay calm when things start going sideways has benefited the current New Hampshire Women’s State Amateur Champion. Her swing and demeanor have been compared to Canadian golfer Brooke Henderson, who won the Women’s PGA, US Women’s Open and Women’s British Open. In fact, if things are going too well, she may introduce a wrinkle that could expose a weakness she can improve on.

“One year I decided to putt lefty for the season,” she says. “I tried it out, goofing off, and it felt more natural. So I did it for a season and thought, ‘OK, that’s enough.’”

“I like to try different things — take risks and see if it pays off,” she says. “A lot of people won’t take big risks that could pay off for them in the future. I try to do that a lot to see if I can improve. I go for it.”

In late June, Thibodeau played at the PGA Women’s Open in Michigan. She wasn’t completely satisfied with her performance, but it shed light on the discipline with which the University of Louisville sophomore approaches her game.

“I didn’t play the greatest,” she says. “After the second round, I was 20th out of 78 people. But it was good putting myself under pressure again and seeing the weaknesses in my game, which will help going forward.”

It also served to prepare her for what could be next. The college-ranked and World Amateur Golf-ranked Granite Stater has her eyes on bigger things after graduation.

“The dream and goal is to go on to the LPGA from here,” she says, and then adds with typical humility: “But there are a lot of really good golfers.”