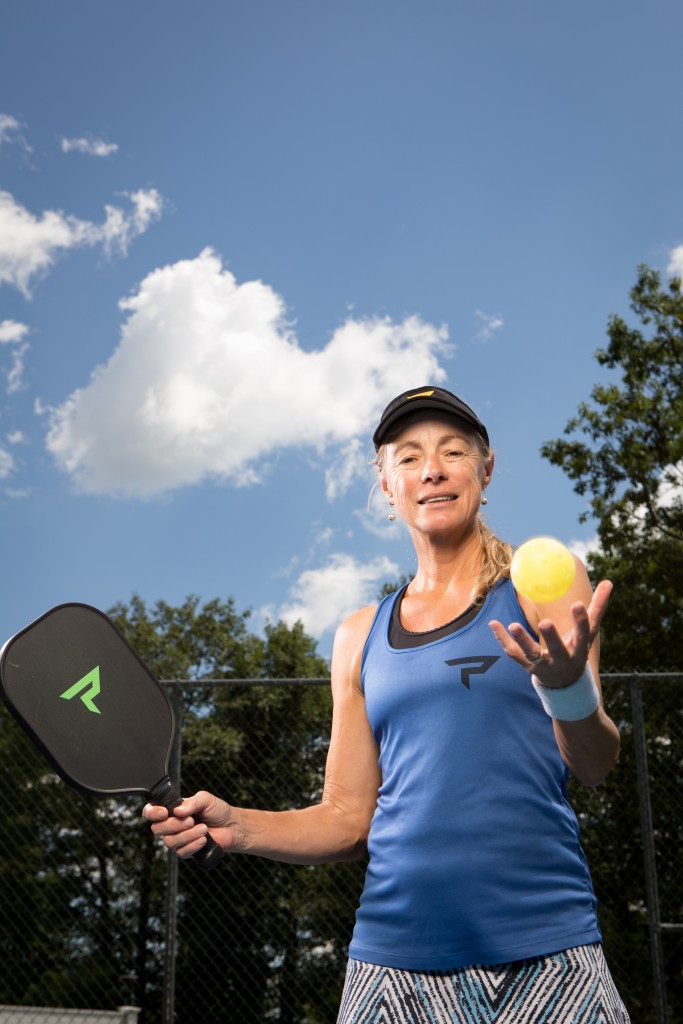 The eight small, 20-by-44-foot pickleball courts at The Club at Christmas Mountain may not be Wimbledon, but for Clare Grabher, that’s fine. And she should know, because she’s played at both.

Grabher, originally from Surrey, England, was a British Junior Champion tennis player who played at the Cathedral of Tennis in the late 1970s.

Now, however, she takes to the court in Bartlett with a pickleball paddle and a big smile.

“It’s an amazing sport,” says Grabher, who lives in North Conway much of the year. “And this is coming from someone who played tennis. A lot of tennis players will poo-poo it and look down on it a bit, but that’s until they get out there and play — and then they’re hooked.”

Pickleball, which combines elements of tennis, badminton and table tennis, where players volley a polymer ball over a net, is said to be one of the fastest-growing sports in the country. Grabher has become an unabashed, enthusiastic evangelist for the sport (“I sound like I’m in some kind of a cult,” she says, laughing). But it almost didn’t happen.

“I have a friend who said I had to try this new game called pickleball,” she says. “We went down to the middle of town where there are some courts. I saw people playing and I almost didn’t get out of my car. I was being a bit of a tennis snob. I thought the demographic looked a little older, I thought I was maybe too athletic, but then I thought, ‘I’m older.’”

Pickleball has volunteers known as ambassadors. There happened to be an ambassador there that day.

“He took me onto a court and I stayed for five hours,” she says. “I’ve been in sports my whole life — I played professional tennis when I was young — and I’ve never even remotely had as much fun playing any other sport. Ask any pickleball player.”

A natural competitor, Grabher took to the sport quickly.

“It’s a very easy learning curve for anyone who’s got any racquet sport background. In very short order, they can play the game and have fun and be pretty good,” she says, with one caveat: “But it’s not the same as tennis.”

The challenge is that it’s a game of strategy, not necessarily one of power. It’s played on a smaller court, so strength and speed don’t necessarily guarantee a victory. Grabher says placement and an understanding of the game are more important.

“A good player in their 70s can beat a 20-year-old if they know what they’re doing,” she says. “That’s what makes it a great game. It’s a mix of athleticism and speed and so on, but it’s also about knowing which shot to hit at what time.”

The longtime owner of New England Tennis Holidays, Grabher fills her days coaching and playing the sport. Among her pickleball accomplishments, the IPTPA-certified professional won the national championships for 55-and-over in both singles and women’s doubles three times each, and the US Open for 55-and-over.

What is pickleball?
Similar to tennis, two to four players use paddles to hit a ball over a net. The ball is served underhand below waist level. Only the serving side can score a point. The first side that scores 11 points, and is winning by at least two, wins.

“Doubles is the real highlight,” she says. “I have a partner from Massachusetts who is a lefty. Singles is like mini-tennis. Doubles has so much more finesse to it. That first doubles championship was a real highlight because you have a team member to celebrate with.”

Grabher grew up a tomboy in the southeast of England “falling out of trees,” and relatively unaware of the different treatment between men and women in sport. Her tennis game improved quickly. She played on the tour for about five years and, by the late 1970s, she found herself on the renowned courts of Wimbledon.

“What I remember is when you’re walking on the courts, the grass is so perfect,” she says. “When you walk out there, it’s like, ‘Should I be running around out here like this?’ It’s like a golf green. It was an amazing thing,” she adds. “I’m from Surrey, which is not far from Wimbledon. All my family came out and we had to wear white. In a way it was pretty nerve-wracking.”

“It’s much more informal,” she says. “It’s one of the reasons I prefer it. In tennis, you have to make groups and have exactly four people and make arrangements for this time or that time. In pickleball, you can show up for games 10-15 minutes before and just drop in. It doesn’t matter. It’s inherently more inclusive and social, and definitely not as serious in terms of requirements or clothing and being quiet. People will often yell while you’re playing. It’s more fun to play than any other sport.”