Pints, pizza, crullers and clams — this Northwoods spot has it all 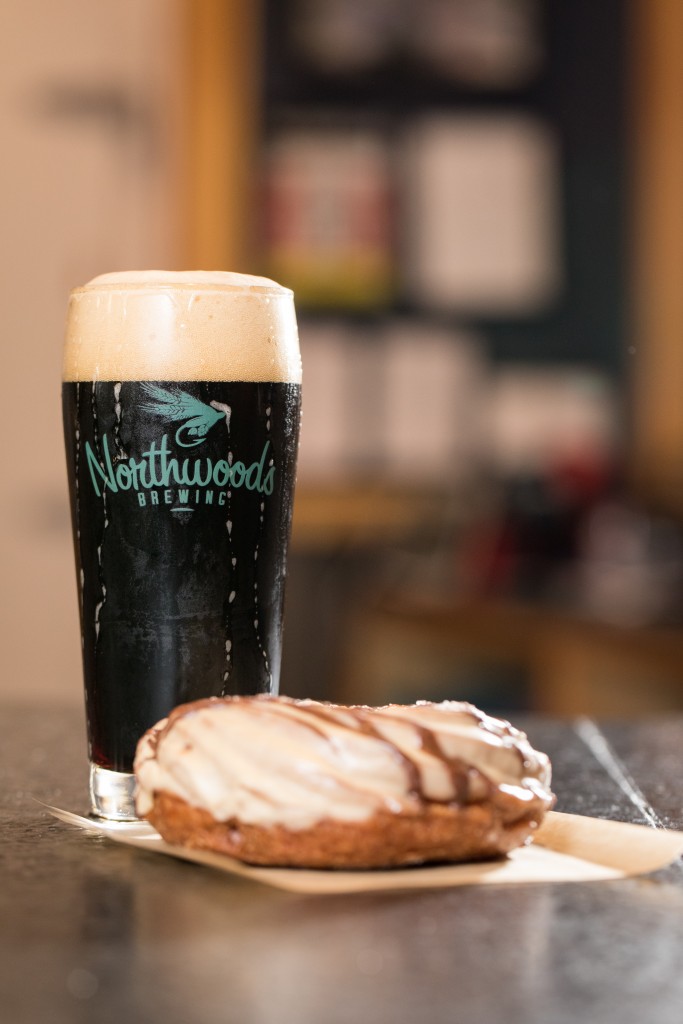 A pint of Northwoods’ coffee porter and a cruller makes for an interesting and tasty combination. Photo by Kendal J. Bush

Route 202 winds through Northwood, passing over Tucker Brook and snaking around Harvey Lake until a large, barn-red building topped by a trio of cupolas rises up alongside a sweeping field just over the crest of a hill.

It’d be easy to appreciate the picturesque scene as another typically beautiful Granite State vista you’re likely to find along the backroads of many quiet towns. But then, zipping past Northwoods Brewing Company without stopping would cause you to miss out on the closest thing to Willy Wonka’s factory we’ve got.

After all, there’s not a lot the brewers, bakers and chefs here can’t do. They make excellent beer, ales, stouts and sours, among other hoppy concoctions, but there are also a number of inventive pizza creations, hand-scooped ice cream, golden fried clams, and probably the best handmade donuts this side of the Suncook River. Yeah, donuts. At a brewery. Technically, they’re crullers, but they’re round with a hole in the middle, so let’s not quibble over the terminology. Yet.

It’s all here under one roof, just a scone’s throw from Northwood Lake. The only thing missing might be Augustus Gloop’s New Hampshire cousin, Derek Gloop, being washed away in a river of IPA.

“It is quite a melting pot here,” says Sarah Fenerty, head of marketing and recreational event coordinator. “We do a lot.”

It starts just inside the front door at The Bake Shop at Northwoods Brewing, where visitors encounter a glass case of baked goods — sticky buns, cinnamon rolls and lemon scones, but primarily the oversized, swirling, grooved, multicolored (OK, we’ll say it) crullers.

“The crullers are more of a pastry,” Fenerty says. “It’s a very delicate dough that’s not made with the same structure of something like a potato donut. It’s a light batter that they pipe out and deep fry.” 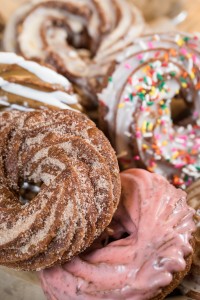 A pile of perfection: sweet, light crullers from The Bakeshop at Northwoods Brewing. Photo by Kendal J. Bush

Toppings like cinnamon sugar, bacon, almonds, chocolate, raspberry, and even a peanut butter and jelly icing, among many others, sit perfectly between the thick grooves that rise up from the pillowy dough. Additional flavors are inspired by the brewers going about their work on the other side of the glass that separates the bakery and dining/taproom from the brewhouse proper.

If you’re willing to sell your dietary discipline to the devil, head for the crossroads of beer and baked goods. It’s worth it.

“Without a doubt, our coffee porter goes so well with any of those crullers,” Fenerty says of the Kveik-fermented, coffee-forward brew. “It’s not really like drinking beer. It tastes like a nice, really rich coffee. Usually, I suggest that if you’re doing a cruller and you’re here to get beer, try the coffee porter or any of our darker beers. They pair really nicely.”

A dining room with high ceilings lined with natural wood and a tasting bar that looks directly into the brewhouse is filled with the sound of music and patrons ordering flights, pints, and choosing from a number of unusual pizzas. Pies range from the recognizable (red sauce, pepperoni, mushrooms, etc.) to the Loaded Baked Potato — roasted and black garlic, extra virgin olive oil, mozzarella, sharp provolone, baked potato, bacon, sour cream and chives. The challenge, then: Choose the perfect pizza/beer pairing. Luckily, there are plenty to try. Arrive at any given time and there are typically 24 different beers available between Northwoods and its sister restaurant, just on the other side of the wall from
the taproom. 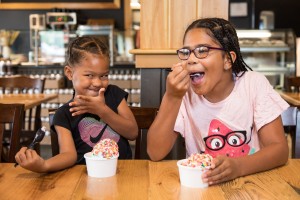 The dairy bar at Johnson’s has been a Northwood institution for generations. Photo by Kendal J. Bush

“We’re not just trying to throw out random beers and see how many we can produce,” Fenerty says. “Each one has to have a specific story about why it came into production and what the experience could be for the consumer — the heart of the beer.”

Head Brewer Geoff Gyles and his staff of four (and two apprentices) each bring different skillsets with them, resulting in a rotating and inventive roster of brews. Historically, Glass, a double-hopped IPA, has been a top seller, but recently, Landlocks & Brookies has worked its way up the list. A pale ale fermented with the Juggernaut Kveik blend, it offers notes of peach rings, papaya, pineapple and lime. A little further afield, Surf Candy is a puckering sour with lactose, blackberry, raspberry and key lime.

And yet, people love their IPAs. Perennial favorite and Northwoods’ flagship brew, Mac and Margie, is a New England-style double IPA with flavors of candied citrus peels and apricots.

“It’s all pretty toe-to-toe as far as sales go,” Fenerty says. “There’s something out there for a variety of beer drinkers. If you’re not that IPA person, there are others. What’s really nice is we always have a different variety of things on tap or in the tanks. We’re not just focused on pushing IPAs or lagers all the time. We like to have different styles that aren’t as common.” 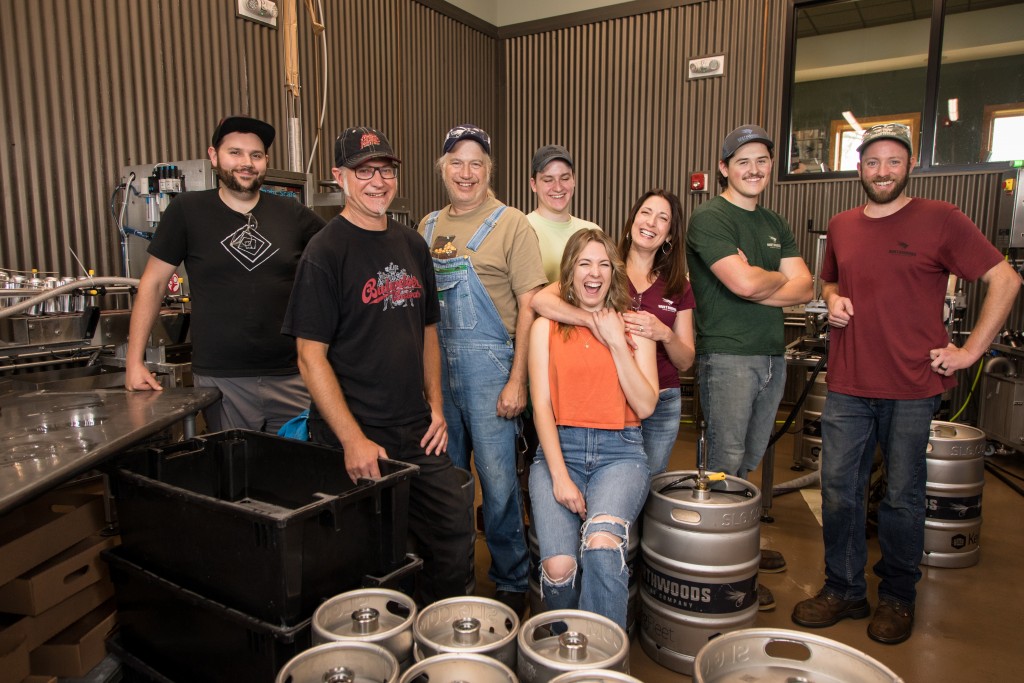 The brewhouse recently hit full capacity, but the team worked to ensure there would be tank space available to produce some of those experimental styles of beers. One of Fenerty’s recent favorites is Loud in Your Heart — a fruity saison aged half in white wine barrels, and half in red wine barrels and then combined.

The selection changes often, with different craft brews available between Northwoods and its sister restaurant, Johnson’s Seafood & Steak, which has been open since the 1940s. Fried clams, lobster, pasta and steaks have kept locals coming back for decades. An ice cream counter with an extensive list of outrageous flavors (Unicorn Delight, I Scream for Cake) has made for a perfect ending for local families for generations. Fenerty’s father, Jeff, purchased the business nearly 21 years ago with an eye to maintaining the institution’s commitment to the community.

“It was important to my dad to honor the tradition of Johnson’s,” Fenerty says. “The Johnson’s dairy bar has been a staple in Northwood for a long time.”

So, when it came time to expand, the family kept that lineage in mind.

“We wanted the outside aesthetic to fit the location we’re in,” she says. “We’re surrounded by these big, beautiful fields, and one of the biggest obstacles is that we didn’t want it to be an eyesore. It had to add to the aesthetic of the town.” 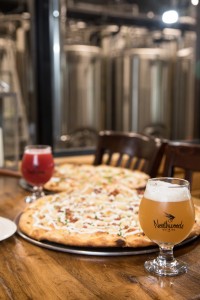 Pizza and beer – a match made in Northwood. Photo by Kendal J. Bush

The exterior of the building features the gorgeous Northwoods Brewing logo — a fishing fly that cleverly incorporates hops and barley among its hackle and wings. Fenerty — an artist who designs all the labels — helped come up with the logo design.

“I started thinking of who my father is and what he loves to do,” she says. “He’s an avid outdoorsman and his Zen thing to do is to fly fish.”

The brewery portion of the business opened its doors and poured its first pint in November of 2018, enjoyed a year of normalcy, and then was forced — like everyone else — to deal with the economic effects of COVID-19. A challenge? Sure. But “we were very fortunate because people kept drinking beer during the pandemic,” says Fenerty.

Fresh off of a canning shift at the brewery (Landlocks & Brookies on this particular day), Fenerty had a chance to reflect on the previous year.

“It’s going to sound like nepotism, but I’m really proud of my family and my parents,” she says. “The one thing I love is that no job is beneath them. There’s no job where they won’t help out. My mom is here, in the tasting room, bussing tables and helping customers. The number of times my dad has come in to help wash dishes because they got backed up — he’s driven down and done dishes at 8 p.m. on a Saturday night plenty of times,” she adds.

“I’m really proud that they’re really so humble and hardworking,” continues Fenerty. “The staff enjoys working with these two people who make it known that they care about their staff and support them as much as possible. People see that. Even I’m not here just because I’m their kid. I love working with my family and making it a place we can be proud of.”