Sprinkle a Taste of Local Flavor With Stock + Spice 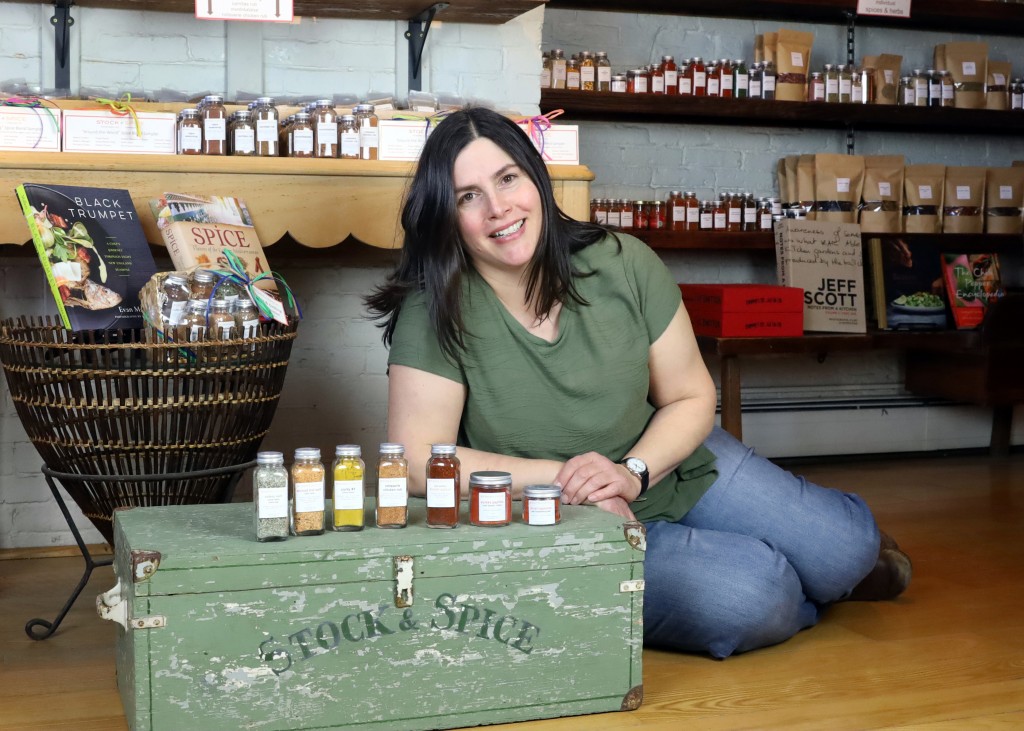 The salty air of Portsmouth’s Old Harbor just outside Stock + Spice conjures up images of the international spice trade. But inside the rustic shop, smells of freshly ground spices typically come from the mingling of ingredients that were once considered “exotic” merely because they were foreign-grown.

Long ago, spices from four continents were unloaded at the wharves just across from the shop’s present-day location on Ceres Street. Today, many ingredients sold at Stock + Spice are grown on nearby farms. The talent responsible for many of the distinct and versatile spice blends is also local.

Chef and store owner Paula Sullivan is trusted for her strong Seacoast culinary experience. She presides over the sourcing of ingredients, the creation of dozens of blends, and nearly a hundred single spice ingredients. Many of the custom blends have folksy origin stories that reflect the culinary and farm communities in and around Portsmouth.

Increased interest in those blends coincides with the popularity of Turkish and Middle Eastern cuisines. “Mastering Spice,” the third spice book by Israeli chef Lior Lev Sercarz, was widely ranked the best cookbook of 2019. Sercarz is known for creating blends that evoke vivid childhood memories. In contrast, Craig Claiborne’s “An Herb and Spice Cook Book” from 1969 devotes each of its chapters to the use of a single spice or herb. The chapter on “peppers” is on peppercorns alone.

Visit stockandspice.com to see the full range of spices, blends and recipes. During COVID-19 restrictions, the shop was limited to online business. It has since reopened to modified and limited walk-in traffic. You can still purchase spices online.

Sullivan, who was classically trained at Johnson & Wales in Providence, is herself part of this trend of noted chefs becoming adept at creating signature blends and enhancing some of the old standards. She also collaborates with some superb culinary talent.

“I’ve always been a New England chef,” says Sullivan, who started her career working for renowned New England chef and cookbook author Jasper White, a two-time James Beard award-winner. “The urge to source locally was imprinted upon me in Jasper’s kitchen,” she says.

Another influence is Portsmouth chef Evan Mallett, chef-owner of Black Trumpet restaurant, where Sullivan also worked. “He’s a most creative and curious chef,” she says. “His exuberance and the seductive powers of the spices themselves” convinced Sullivan to take over Stock + Spice, which Mallett and his wife Denise originally opened. The shop carries a number of Mallett’s original blends. 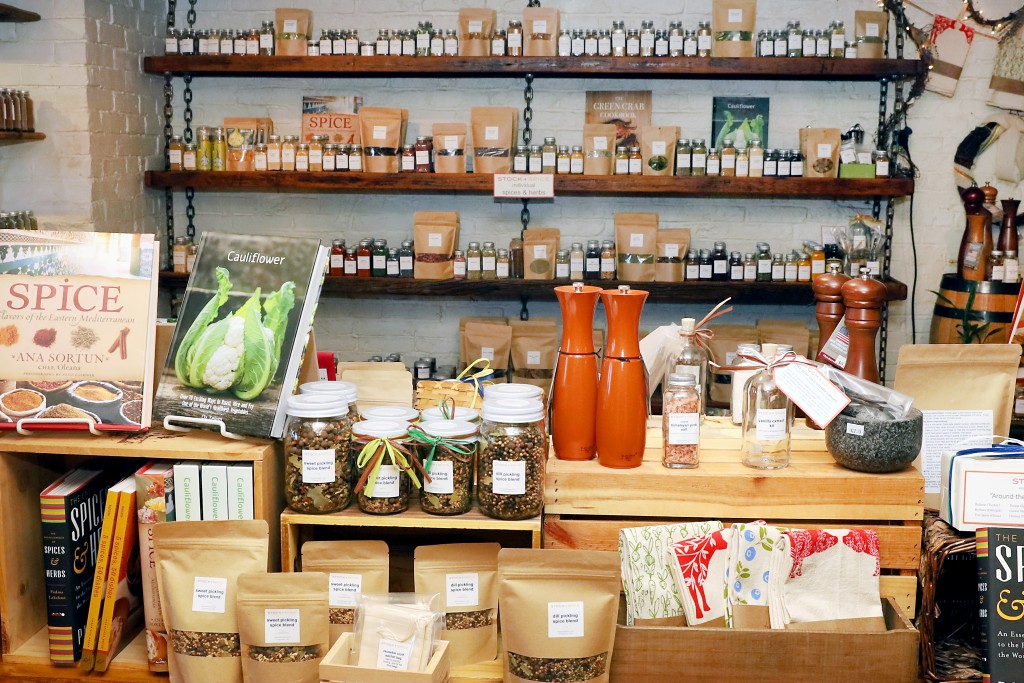 Sullivan is also respected by locals who have the notion that the right spices infused in a bloody mary, mulled wine, fried eggs or pan-seared shrimp can take their minds off a wet, dreary day or a long period of being housebound.

“You don’t have to be an alchemist to use spices. Start with a just a couple; you can stay simple or build on that,” Sullivan says. “Berbere, our classic Ethiopian blend, contains more than 15 spices. But I’m also a fan of sprinkling a little sumac and Aleppo pepper on local halibut. Even a touch of Szechuan peppercorns infused in oil will bring a piney, citrusy element to a simple sesame noodle salad.”

Sullivan freely dispenses many of her own spice-infused recipes: chili tequila truffles, pork shank sweet potato soup, East Coast-meets-East Asian chicken thighs, and a prized rose hibiscus shortbread. She has a before-dinner Chai-tini, and an after-dinner apple hibiscus hot toddy. There’s also her Mexican spiced cocoa, sold as a mix, made with local chiles when available. It has a Latin American taste profile and is suitable as a year-round hot drink.

Sullivan explains the uses for ground rose-petal powder and the differences between Cassia and Ceylon cinnamon. She answers queries about why saffron is so expensive (it’s manually extracted thread-by-thread from crocus blossoms). There is a trio of distinct curry blends: Sri Lankan, East Asian, and a “mellow yellow” (a flavorful but not-overpowering version of a Madras curry). A fourth curry blend may be coming; Sullivan is working on a Caribbean curry, inspired by a goat dish she once had on the island of Granada.

With so many additional spices entering into our daily cooking, the boundaries of what defines New England cuisine are being challenged. But the spice trade balance has also shifted. Certainly, many spices sold at Stock + Spice are sourced from farther away, but trade is beginning to flow the other way. Sullivan says that a significant portion of the shop’s online orders for her locally grown spices come from Vermont and as far away as California. A historic flip, some might say.

Chef David Vargas, a two-time James Beard finalist, is owner-chef of Portsmouth’s Vida Cantina. Boom Spice is a creation based on recollections of his mother’s chile. To make the blend, Sullivan toasts and grinds ancho and New Mexico chiles, then grinds cumin and coriander and adds just the right hit of cayenne. It is added to sautéed aromatics to make chili, but also offers a Southwest profile to fried eggs or, with a pinch of cinnamon, to roasted sweet potatoes.

Yucatan blend is inspired by the seasonings Chef Evan Mallett uses for his ceviche served next door at Black Trumpet restaurant. In a shrimp stir-fry with garlic and scallions, it adds a high-spirited yet delicately citrusy taste. Mallett, a five-time James Beard semi-finalist, originally opened Stock + Spice in 2014 with his wife Denise.

What’s in the air?

The inviting smells inside Stock + Spice often are from freshly ground spice ingredients grown on farms in New Hampshire and Maine.

Locally grown peppers like the habanero, ghost, New Mexico, capperino and cayenne can figure prominently in the aromas that circulate. But then comes the hit of the freshly dried and ground orange zest, or the Ellagance culinary lavender from Hidden Meadows Farm in Eliot, Maine.

The Local Paprika is made with Boldog peppers from Tuckaway Farm in Lee, while the hot chiles for the Wicked Hot Salt are grown at Wake Robin Farm in Stratham and Heron Pond Farm in South Hampton. “All the peppers ripen in two to three weeks. I dehydrate them as they’re harvested and grind in small batches throughout the year,” says Sullivan. “The Wicked Hot Salt is for anything you want to add salt to, but with lots of heat and fruity pepper flavor,” she says.

Celery salt, made from celery grown at Two Toad Farm in Lebanon, Maine, is versatile for old standards like deviled eggs, bloody marys, cocktail sauce or sprinkled on a ripe tomato. It’s also an ingredient in homefries Sullivan makes with granulated garlic, paprika and black pepper.