Taste the shine at Steadfast in Concord 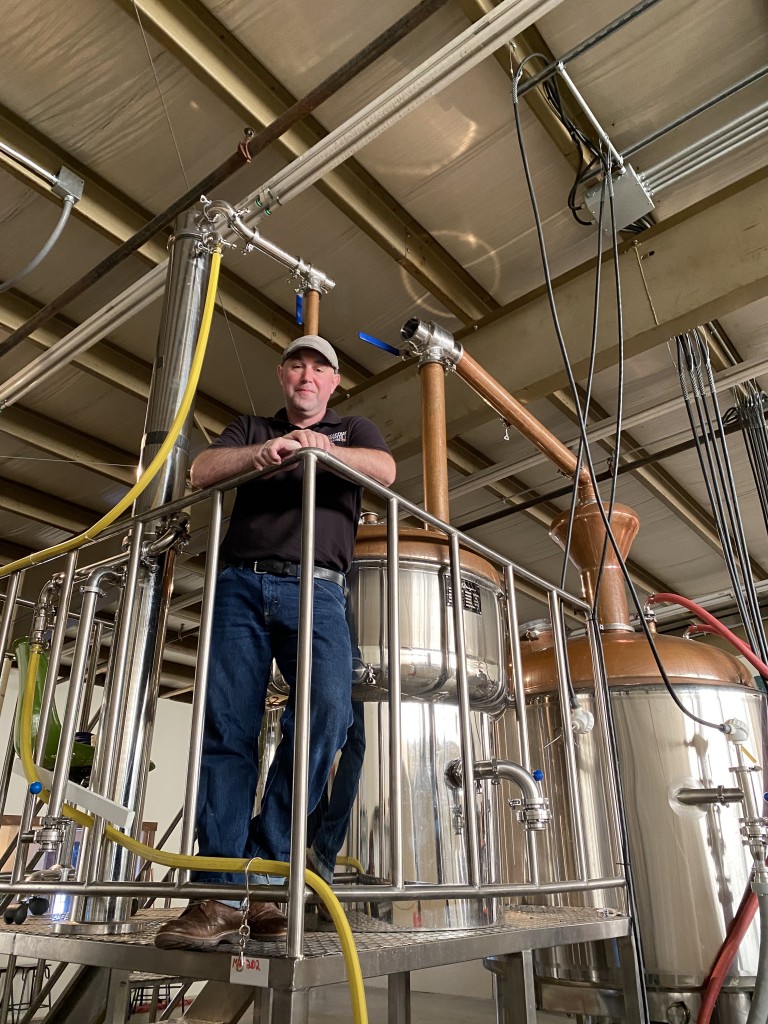 Pictured here and on the opposite page is CJ Lundergan at Steadfast Spirits Distilling Co. in Concord.

CJ Lundergan has an intense yet calm demeanor. Calm, considering he, along with his wife Lori, is running Steadfast Spirits Distilling Co. while raising two kids under 3. Oh, and CJ is also a full-time firefighter in Windham. Sleep is overrated. But who needs sleep when you have moonshine? Moonshine, or “shine,” used to be defined as an illicit (i.e., untaxed) product often distilled at night under the shine of the moon. More recently, it has come to define the legally made spirits produced using traditional methodology. “I only want to do traditional American-style products,” says CJ. “American whiskey, to me, is a corn-based, pot-distilled, single-run product.” What this means is that it cannot be reproduced in an industrial setting, and that it requires human hands and small vessels, time and attention. Shine evolved independent of the Industrial Revolution, and most efforts to gain efficiencies seem to generate an equal loss in the art of making whiskey.

But one cannot live on shine alone! Here comes trouble. Trouble’s Moonshine, a brand under the Steadfast umbrella, is a line of flavored shine products with a ton of seasonal variety. “The Trouble’s Moonshine line is a way of taking whiskey into the mainstream,” says CJ. “It lets us stretch our legs.” There are two styles of Trouble — a “liquor-style” spirit at 72 proof, including toasted marshmallow and peanut butter. These come in tall bottles and are great for mixing. And then there are the “old school” mixes like apple pie but also strawberry and blueberry lemonade. These come in 750-ml Mason jars at 54 proof and are great with seltzer (to adjust the duration of the evening, if you dig). Peanut butter is the most popular, and can be paired with the chocolate version or almost any fruited variety for a PB&J in a glass.

Lori told me they were enjoying “flipping the lid on moonshine in a way that impacts community, and building on the model of craft, which started with fun and libation.” As a firefighting family, community was a high priority when they were planning the company. CJ was walking into his home in Derry when an idea hit him — let’s open a distillery! When he pitched the idea to Lori, she didn’t say, “You’re an idiot,” and he knew he was onto something.

Building a community at the tasting room was easy, as the service model was very much in line with craft breweries, with the exception being they can only serve quarter-ounce samples. But the samples were consumed, and people brought their friends, or bought their friends bottles, and the word got out that tucked into this quiet industrial park two minutes from the capitol building is a distillery worth a visit. “Building this organic community, building this thing — people really enjoy what we’re doing. We have become a part of this cool thing,” says CJ.

The sense of community extends both ways as well, and it is not unusual to see the Lundergans tag out as they juggle raising the kids (Charlee Ann, 2 1/2, and Taylor James, 4 months) in the distillery with actually running the distillery. Since they signed their lease in August 2018, the family has grown up at the Hall Street location.

The first three years were focused on what are called “white spirits,” meaning no aging in toasted wood barrels — hence, no color. The process was simple but time-tested: Do it the way it was done in the woods. Ferment off-grain, because it is cleaner. Use a single pot still, with an oversized line to a doubler, which is a sort of secondary still that leaves more flavor than a second run through the original still would leave. Serve it fresh and unaged.

But as their fourth year begins, the “brown spirits” are reaching maturation, and I was lucky enough to get a stealthy dram of their first offering before it was offered to the drinking masses. Steadfast’s traditional American bourbon is a smooth spirit. Oftentimes young whiskey can have a characteristic I can only describe as “splintery,” sort of the smell of freshly split wood as opposed to an old barrel. This liquid was not at all splintery. It opened with some brown sugar notes, followed by a nice bite from the generous addition of rye in the grain bill (which was 60% corn). The vanilla from the first-use American white oak barrels came in next, and lingered with the residual sweetness from the caramel barley malt. The finish goes on for days. I suggest a single ice cube or a splash of water to open it up a bit. These handsome bottles hit the tasting room in mid-December. There were limited quantities, but if you missed out, keep an eye out for the next new (old) thing.

Steadfast has three products in 55 state liquor stores, with a fourth one soon to follow, so you can find them anywhere in the state. But, as a PSA from a professional, visit the tasting room, chat with Lori and CJ, or with a stranger seated nearby, have a flight, buy a bottle from the folks who made it, and become a part of the growing Steadfast community.

Until we meet again, at a bar or in my backyard, keep your glass full!