Note: As of Monday, March 16, Gov. Sununu ordered that all restaurants and breweries shift to takeout and delivery services in an effort to curb the growth and spread of COVID-19. For the time being, some of the breweries listed here are still offering to-go options. As you may expect, things are changing rapidly, so make sure to visit the breweries’ social media pages for changes in hours, what’s available, etc. As of March 23, Rek’-lis Brewing Company (Facebook), Schilling Beer Co. (Facebook), Iron Furnace Brewing (Facebook; currently assessing how to proceed), Coös Brewing Company (Facebook), Copper Pig (Facebook) and White Mountain Brewing Co. (Facebook) were still offering to-go beer (and sometimes food). 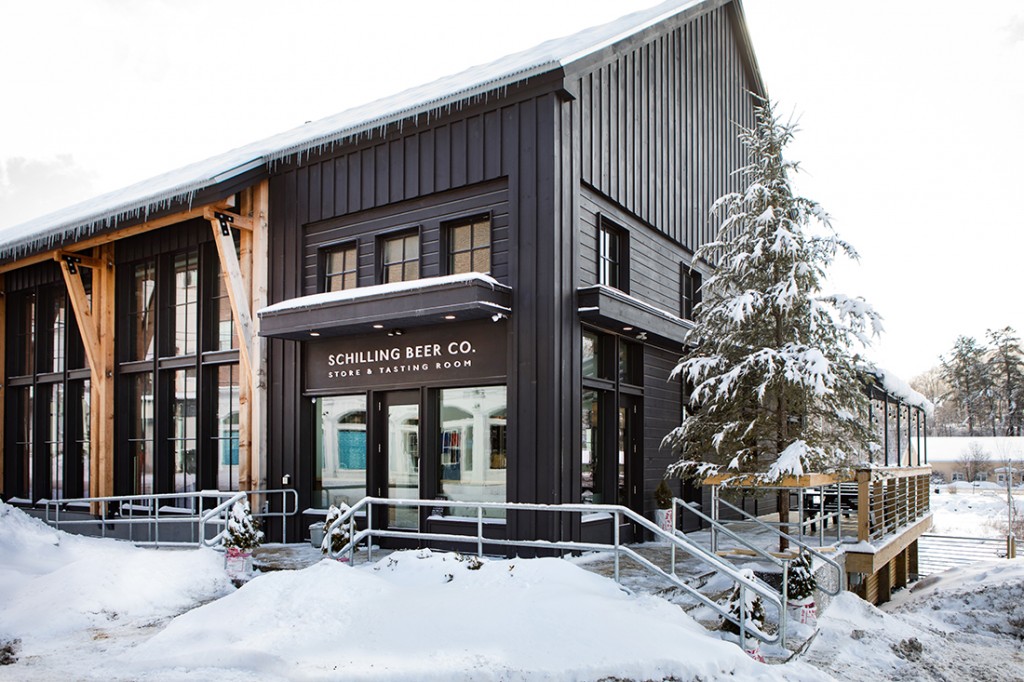 The new taproom at Schilling Beer Co. in Littleton compliments the original brewpub located right next door. Both overlook the Ammonoosuc River.

If you work at New Hampshire Magazine, chances are people will ask you where to go, eat, drink, shop, etc. When it comes to beer, some recommendation-seekers are still surprised that there’s first-rate craft beer in the state at all, though that happens less and less as breweries continue to open and offer consistently excellent beer. When I tell people that my newest favorite region for brewery hopping is Littleton and the nearby towns, the skepticism returns. No disrespect to the Seacoast — it remains a great place to visit a large number of breweries in a small area — but I’m encouraging you to explore north of the Notch.

On a ski trip with friends and photographer Kendal J. Bush in February, we visited three — Rek’-lis Brewing Company in Bethlehem, the new tasting room at Schilling Beer Co. in Littleton and Iron Furnace Brewing in Franconia. Additionally, you’ll find Copper Pig Brewery in Lancaster and Coös Brewing Company in Colebrook (see “Our Town” for more about Copper Pig). Go south down 93 just a bit, back through Franconia Notch, there’s One Love Brewery and Woodstock Inn Brewery in the ski town of Lincoln and White Mountain Brewing Co. in Ashland. In winter, the après-ski vibe is strong. In all seasons, the area’s love for New Hampshire’s mountains comes through in rustic décor and crowds of folks who might have just come in from the trails.

Breweries aren’t only opening up north, they’re expanding. Rek’-lis, for instance, was started in 2016 by Ian Dowling and Marlaina Renton in a 12-by-12 shed. That grew into a brewpub, which (while still open) is undergoing another round of construction. Our large group of eight managed to find space at the cozy downstairs bar, though by midafternoon on a Saturday every table and bar seat was filled both upstairs and down. Another sure sign of popularity? The line of folks holding pagers waiting by the door as we filed out.

Schilling, housed in an 18th-century grist mill in Littleton, opened a modern brewing facility and tasting room next door. Our crew enjoyed flights both by the fire and outside, wrapped in provided warm blankets, on the porch overlooking the icy Ammonoosuc River. After, we visited the original brewpub for charcuterie, possibly the best pretzels in the state and wood-fired, Neapolitan-style pizza.

In Franconia, New Hampshire’s only remaining blast furnace, a 200-plus-year-old iron smelter built of dry stone, stands by Gale River. Just across the road is its namesake — the relatively new Iron Furnace Brewing. Opened by a group of friends who grew up in the North Country, the taproom is open, airy and, we discovered, the best place of the three we visited for a larger party. The upstairs loft was booked for a private event, but there were plenty of spacious tables on the first floor. Though it was too cold to sit outside even with the large heaters, an outdoor area will offer even more room when the temperature gets a bit higher than 20.

The actual beers at all three breweries rotate often, all the better for repeat visits. Next time you’re planning a beer-cation, consider the mountain town breweries. The beer tastes even better after a day spent skiing (or hiking).