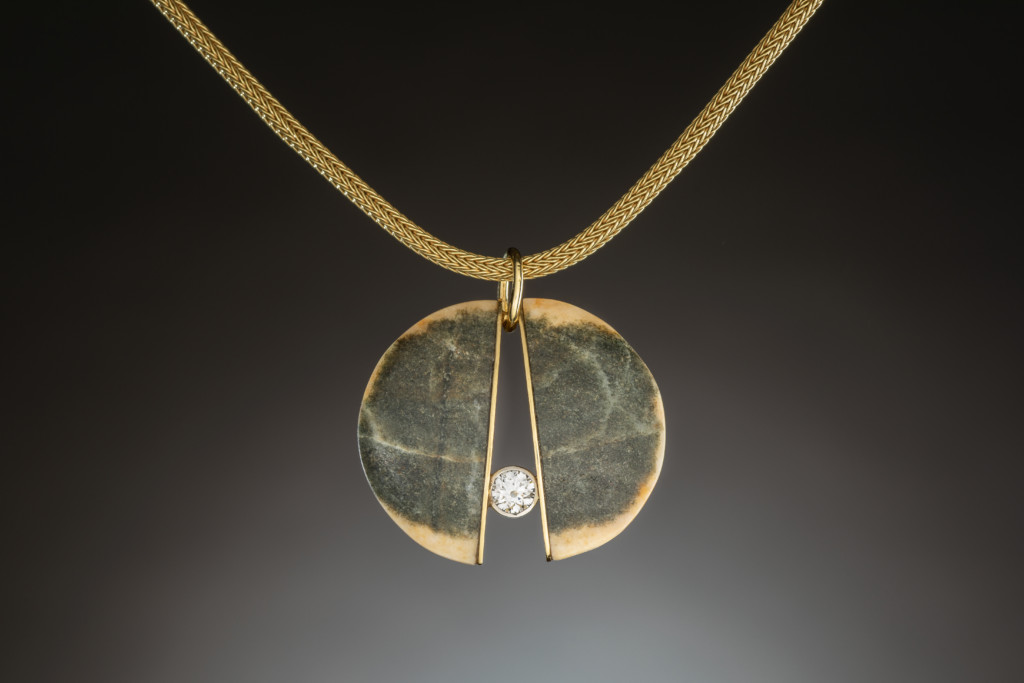 Some people know what they want to do at an early age, and then just do it.

Doug Ostrander was attending Dartmouth College in the 1970s when he visited a local jewelry shop and announced, “I want to make jewelry.” The owner said, “Good. You’re hired.” Ostrander helped in the retail portion and was also tutored in the craft. He eventually finished his master’s degree at Tyler School of Art and Architecture in Philadelphia.

After opening his own retail jewelry shop in Hampton Falls and doing mostly custom work, Ostrander opened a small studio in Portsmouth’s Button Factory 16 years ago. Here he explores his own direction with jewelry design. “I take dirt and make something beautiful out of it,” he says.

Well, diamonds may come from the earth, along with other precious stones and gold, so maybe he has a point. But when he contrasts these very nice, shiny objects with beach stones or other ordinary materials, the look is stunning. Ostrander will cut and polish a found or unique stone, such as dumortierite, and add precious details in a spare design.

His disk-shaped pendants are sliced down the middle and embellished with gold, or maybe just a single, striking diamond. His designs for earrings or other pendants are just as compelling, featuring simple shapes and lots of contrast between the ordinary and the precious.

On December 7, Ostrander’s studio will be part of the Button Factory Open Studios event. Prices for his work range from $750 and up.

Find It
DH Ostrander, Goldsmith
The Button Factory
By appointment only
dhostrander.com