Art often speaks more clearly than words when expressing the hopes and fears of a new generation. We asked the illustration students at the Institute of Art and Design at New England College to tell us what they think of the world, post-pandemic, by showing us. We’re happy to note their creations reveal as much hope as fear.

Manchester residents with a fine eye for detail may have noticed that the decades-old New Hampshire Institute of Art has become the Institute of Art and Design at New England College, joined to the New England College of Liberal Arts in Henniker. The Manchester campus is still there, but the students are not. Like students elsewhere, from kindergarten to grad school, they have been engaged in remote learning and activities due to the shutdown ordered in response to the coronavirus. One of those activities has had art students drawing and fashioning illustrations to show what the post-pandemic “new normal” might look like. Ryan O’Rourke, an associate professor at the school and a professional commercial illustrator, acknowledges that the remote learning and distance requirements have dampened the enthusiasm of many students who missed the personal, face-to-face interaction with the faculty and the camaraderie with their fellow students.

“Once we proposed this assignment, the level of enthusiasm surged,” O’Rourke says. “It was the idea that you could put your own spin on what might be coming, based on where we are right now. I don’t think anyone really knows. Some have treated it in a humorous manner, some in a serious way. Some are hopeful. All the illustrations express one kind of an idea or another, either subtle or drastic.”

“I decided to focus on the fear of other people,” says senior Annabelle Meszynski, who works as a prime shopper for a wholesale 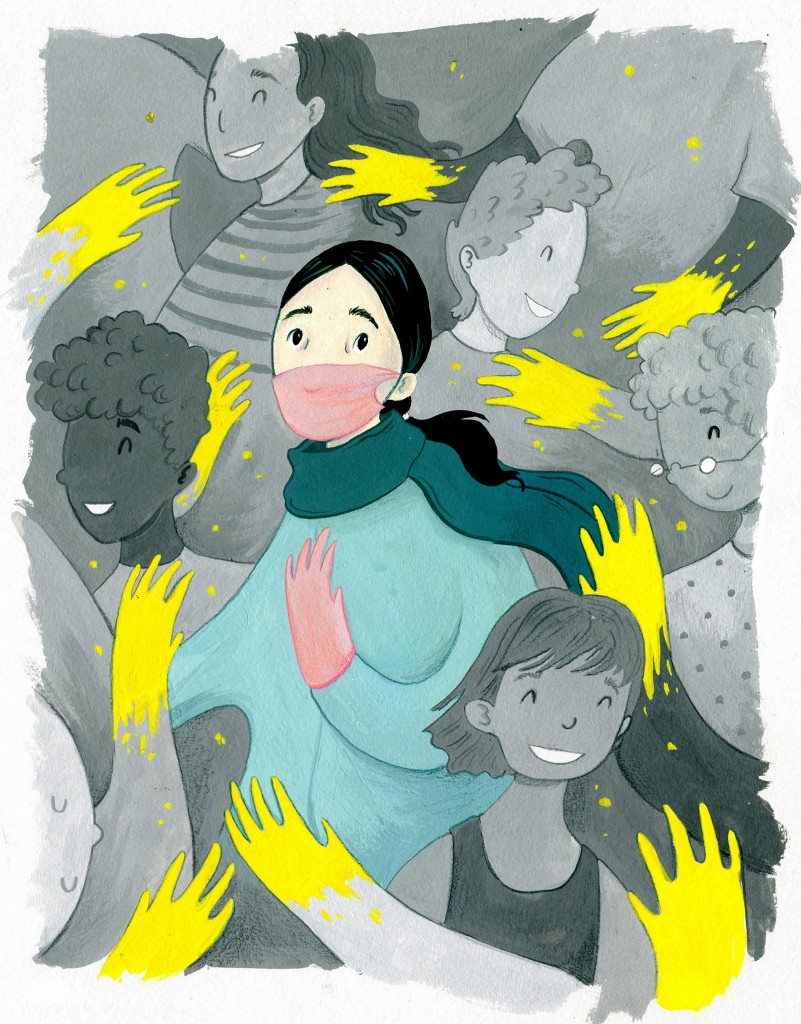 food company.  The requirement to keep apart from other people, “as though they were dangerous,” has left the art student longing for a return to more normal human contact.

So her illustration shows a crowd of people of diverse races and ethnic backgrounds gathered together with no sign of fear, while a woman in the center of the scene is standing aloof, still wearing gloves and surgical mask, reflecting continued caution and fear of the coronavirus. The crowd is illustrated in black and white, while the woman is shown in color, to make her the focal point. “She is in her world, and everyone else is in theirs,” Meszynski says. Obviously, it will take some of us more time than others to get over our COVID-19 angst. So is hers an optimistic or less hopeful vision of the future?

“I would say it’s 50-50,” says Meszynski. “The world is a scary place to go out into, but there are people living normal lives and not worrying about this anymore.”

Meszynski, who will graduate next year, is also feeling apprehensive about the changes brought to the school by its status as a part of New England College.

“It has really weighed on me for a long time,” she says. “I know some of my peers feel the same way. We applied to an art school that was thriving and have seen the school turning into a place where we feel as if we were a secondary thought. I’ve seen a decrease in funding for us to go on annual field trips. We’ve had to shorten our studio classes and had our credits changed so we have to take more humanity classes than art-related classes.” 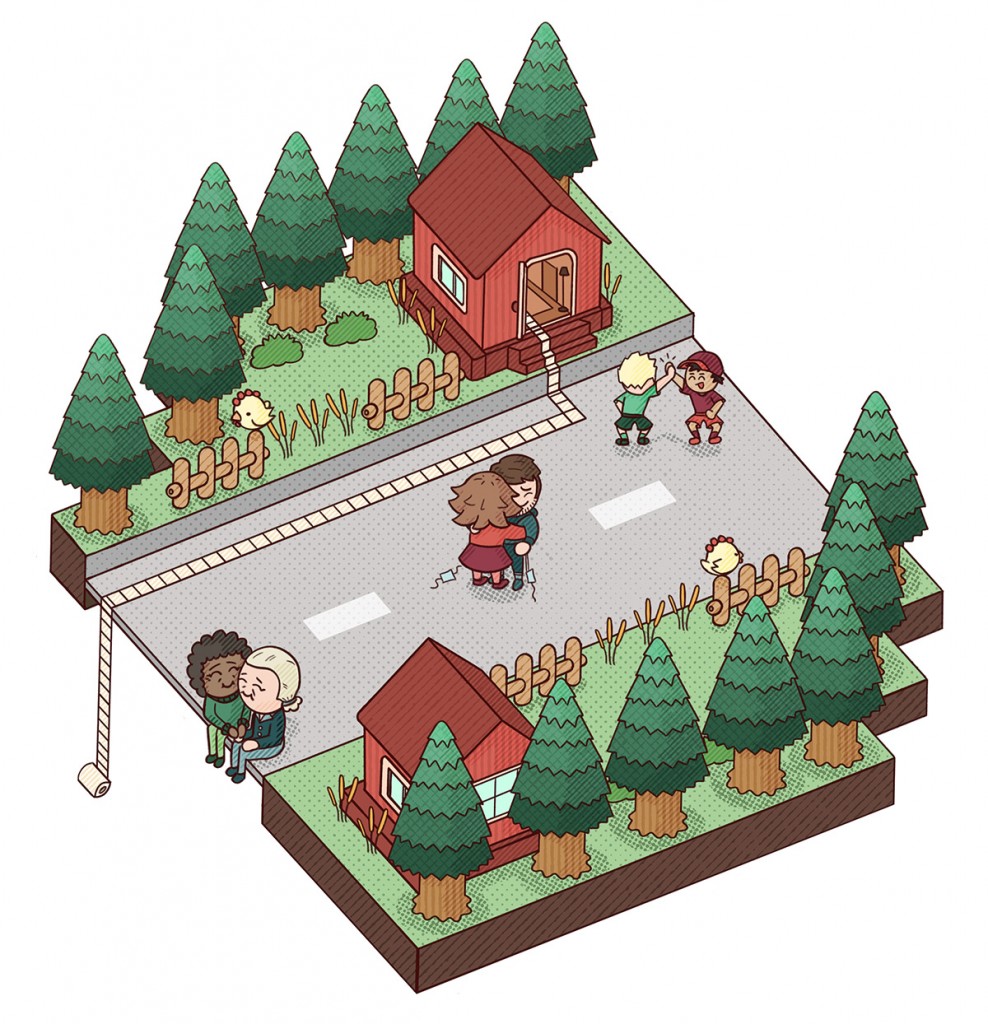 Manchester resident Jon D’Ortona regards himself as an optimist and so he did an illustration of small groups of people touching, even hugging each other, as the social-distancing requirements have not gone the way of the eight-track stereo cartridge or the color-coded alerts from the Department of Homeland Security.

“We did have an opportunity about a month ago to look at everybody’s work and a lot chose a darker, more somber view,” D’Ortona says. “Being sort of an optimistic person, I tried to illustrate something that had a brighter view embedded in it.“ Each student worked “completely independently” the senior art student said. Compared with the disruption caused by the coronavirus, the merging of the Institute with New England College has been a minor concern for D’Ortona.

“It’s certainly been interesting,” he says. “It’s become a little more restrictive. They’re a lot more strict about attendance. NHIA had emphasis on mental health, giving us the space we needed to get into the creative process. It doesn’t have the exact same motivation to give kids the freedom we used to have. Other than that it’s little things here and there, like the whole rebranding process. It seemed like they were tagging school displays with their tag on everything we have.” That became an issue for students “who love NHIA so much.” He also sees the college as now “interested in more game design and film design.” 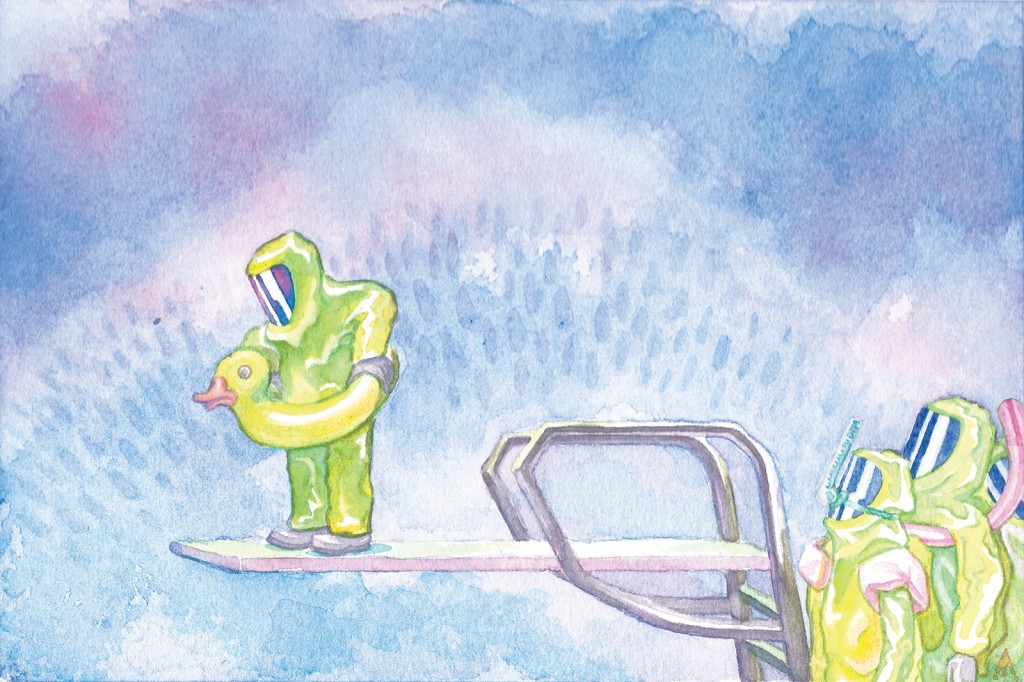 Sylvia Holleran of Manchester, now a graduate, did a watercolor showing children on a diving board over a swimming pool. Considering pools and most other recreational facilities have been shutdown during the pandemic, that might be a hopeful sign — except the children are wearing hazmat suits.

“Even after the hazard of the virus, we’re going to be facing the same old problems of life,” Holleran says. She regards her painting as “a little bit hopeful in the resilience of humanity, but a little bit sad to see another problem piled on.” And if you have a hard time imagining people swimming in hazmat suits, “you might think of them as flotation devices,” Holleran suggests. She also sees hope for the future of the school under the new administration.

“It was unfortunate that, through the whole process, we heard about it more from the media instead of the school. But now we’ve actually learned that the president and other officials have been more transparent and communicative.”

Though she is officially a graduate, Holleran and her fellow grads did not have the traditional commencement ceremony this spring because of the pandemic shutdowns. Commencement for the Class of 2020 has been rescheduled for the fall.

“But at least we’ll be there in October,” says Holleran. 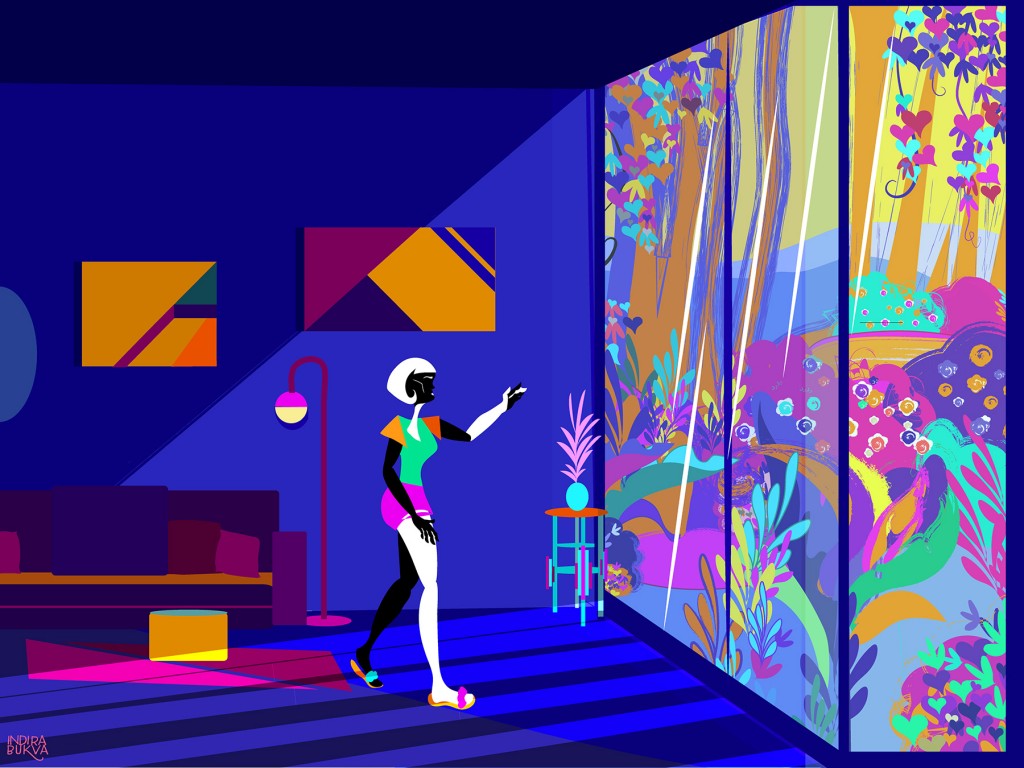 “Mine was colorful piece, interior vs. exterior,” says Indira Bukva, a senior from Lake Placid, New York. A woman alone in a modern apartment building looks out on a world where everything is in bloom. “I wanted the piece to show a new world,” says Bukva, who strove to show “a wave of hope. Things are growing, things are blooming. It’s a healthier, brighter future.”

Her vision of the future of the former New Hampshire Institute of Art, now affiliated with New England College, is bright.

“It’s going to bring a lot of new opportunities. They’re going to be able to expand the school,” Bukva says. “NEC is a much larger school and there’s a great opportunity to meet students of other cultures. It’s all about student inclusion. They’re very ‘there’ for the students.” 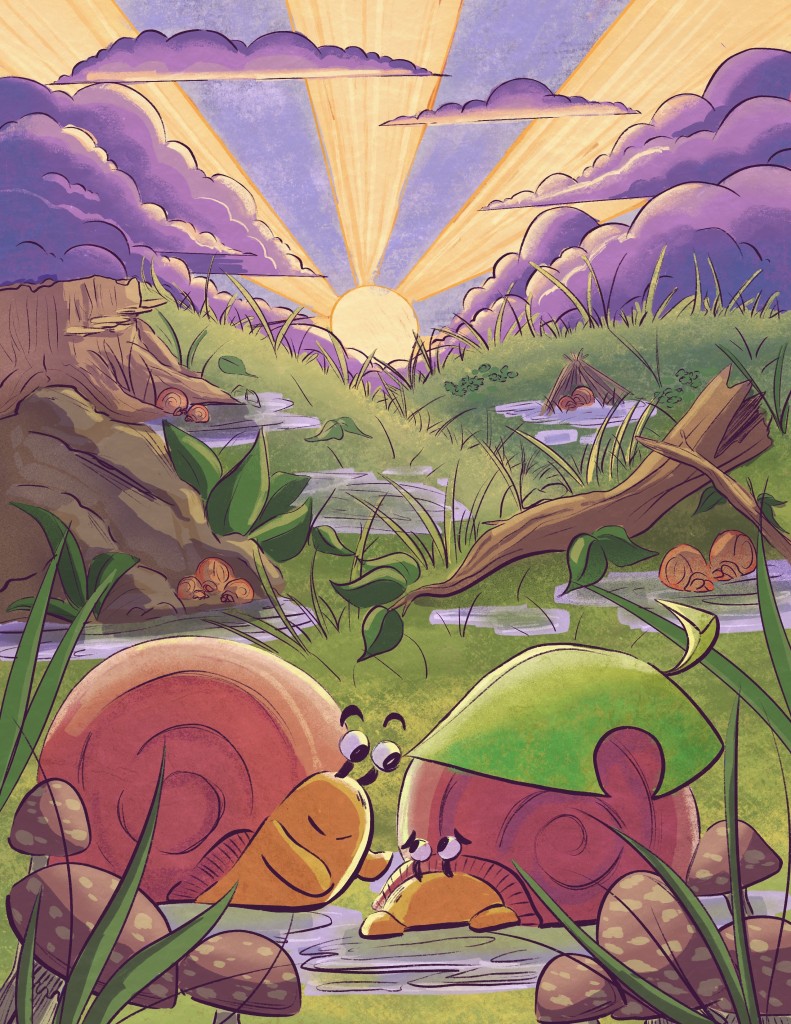 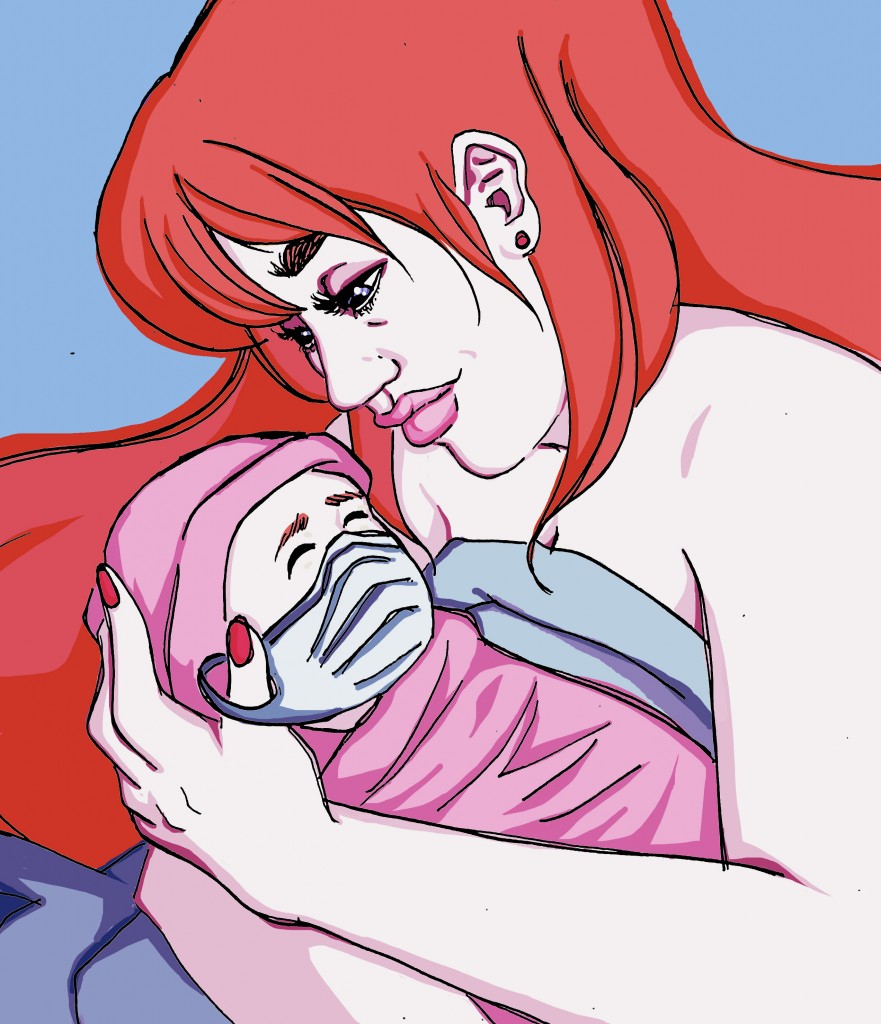 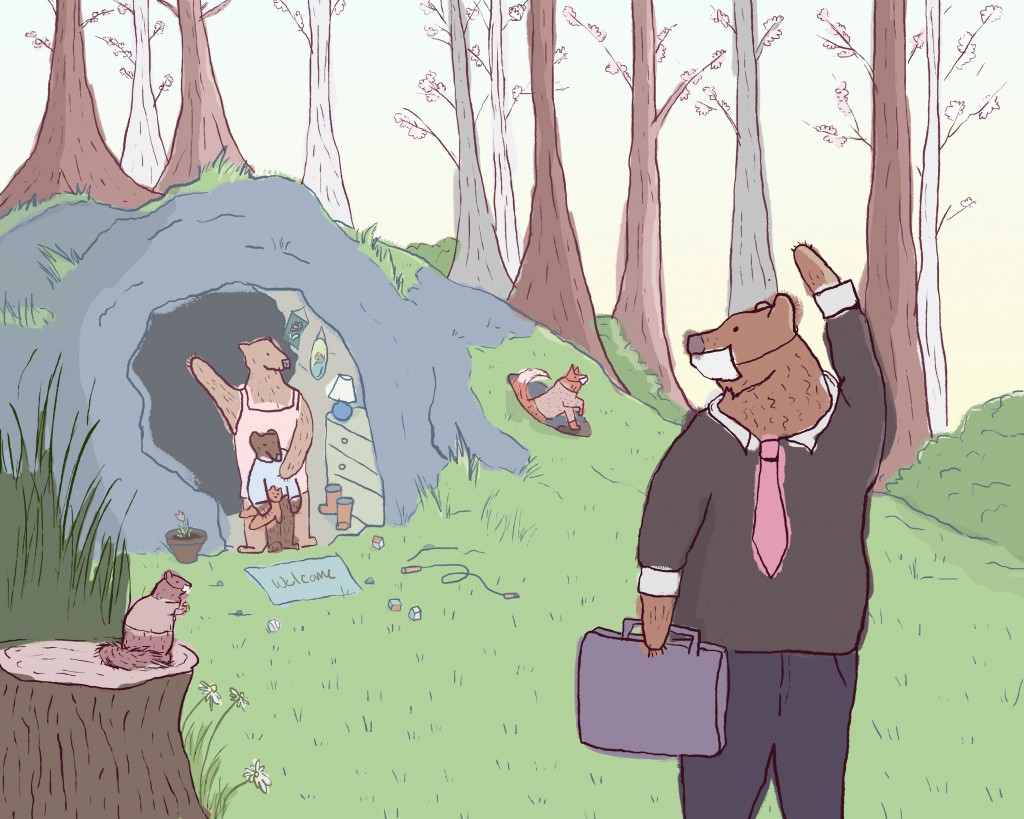 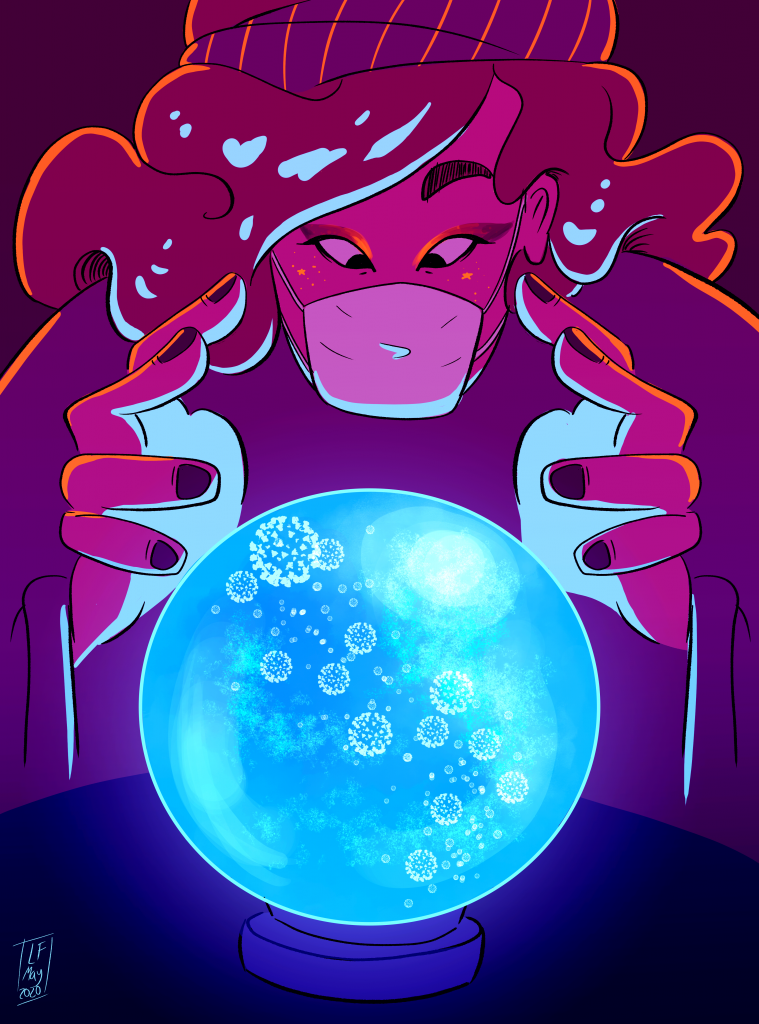 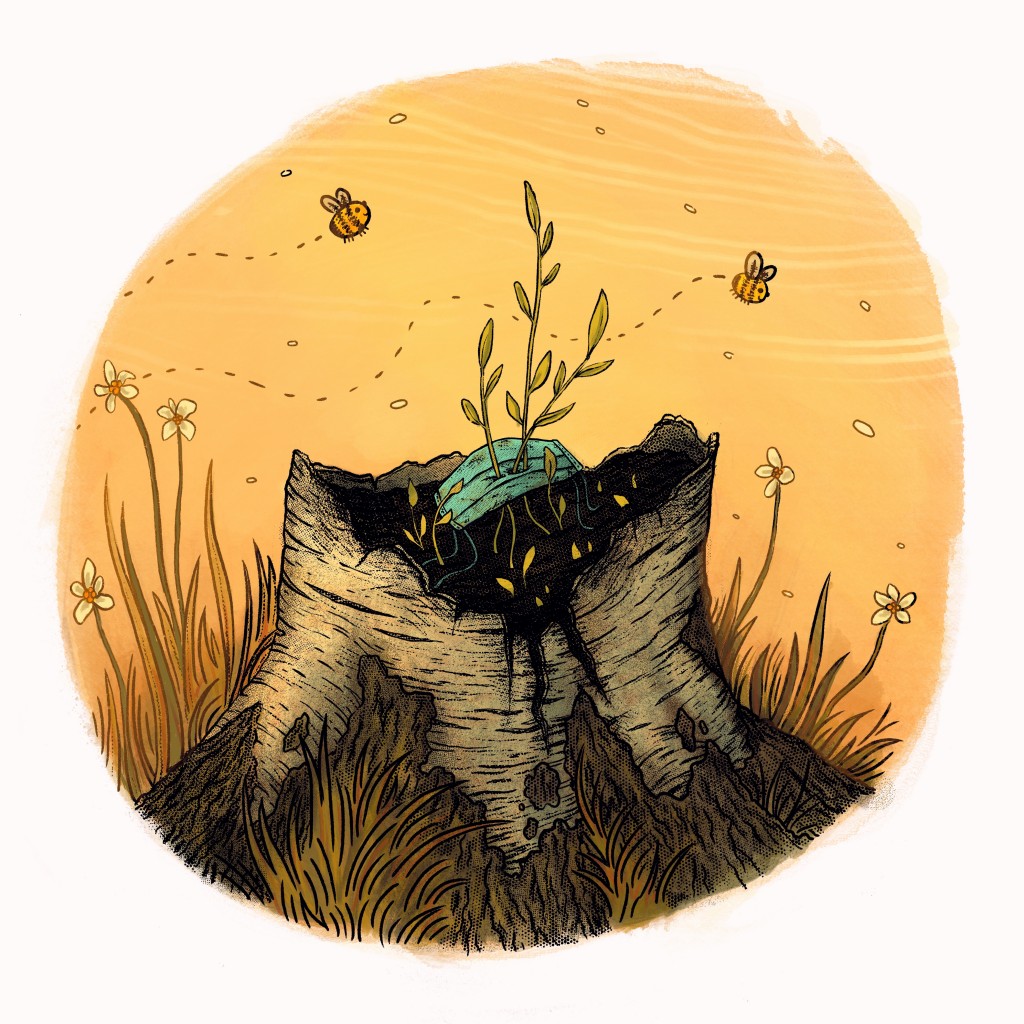