Getting Stoned in New Castle

The mysterious legend of the Great Island Lithobolia 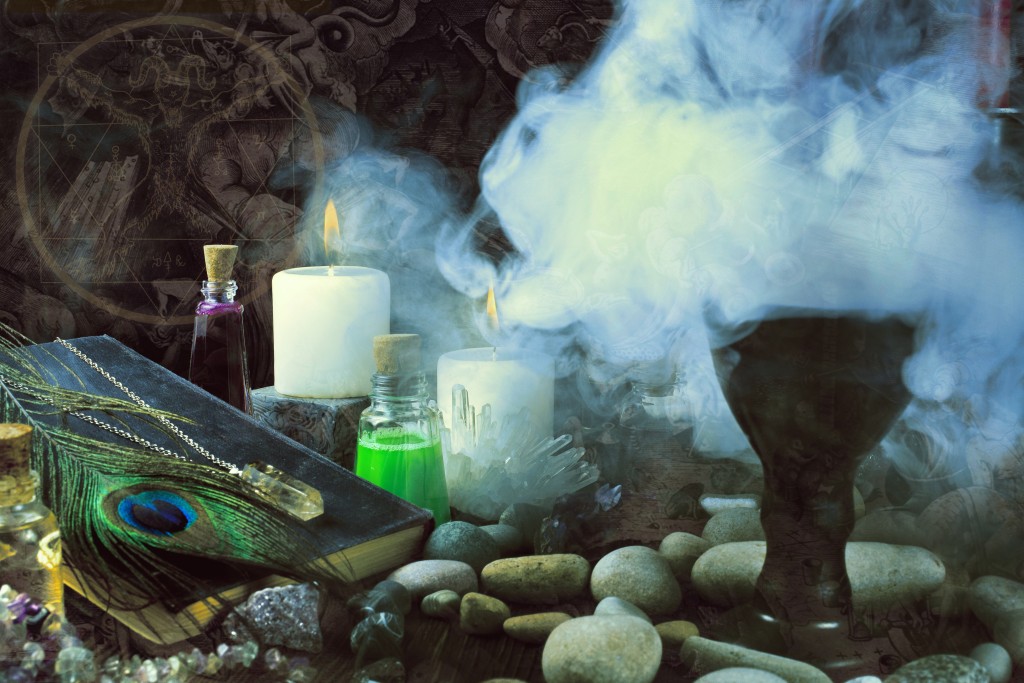 Imagine if you were sitting at home, all is peaceful, when suddenly rocks rain down on you. Not just one or two, but varying sizes from pebbles to fist-size stones. Then, down the hallway, a small boulder rumbles by your door. No culprit is found. Now imagine weeks of this; wherever you go, you are pelted with rocks by invisible hands.

Should you find yourself in such a situation, you may have encountered a Lithobolia, aka “stone-throwing Devil,” and if New Hampshire history offers any guide, you’re in big trouble.

The time was 1682. The place: the Great Island — more commonly known as present day New Castle. It was a time when persons accused of witchcraft might find themselves imprisoned, or worse. It is a decade before the atrocities of Salem, Massachusetts, but the happenings on Great Island could mark a significant precursor to those dark days.

A local tavern owner and Quaker, George Walton, was well known for his wealth and ego. Great Island spanned roughly 512 acres, only a portion being decent farmland; George owned one-fifth of it. Quakers were looked down upon by Puritans. George’s daughter, Abishag, was once brought to court for the crime of not showing up for Sunday services for months. 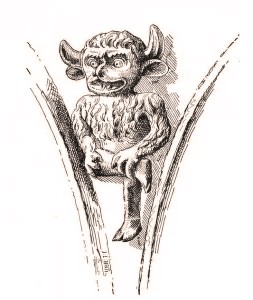 Lithobolia, the “Stone-Throwing Devil,” was reportedly a poltergeist that harassed the community of Great Island (now New Castle) in the 1600s.

George Walton lived with his wife, Alice. He was an innkeeper, lumberman and merchant, as well as owning the largest parcels of land, much to the envy of less-prosperous neighbors. He had two Native American employees — a fact that did not sit well with people in a time just after King Philip’s War had been waged in a last-ditch effort by the tribes in New England to stem to spread of the “English.” His clientele were “godless men” from various walks of life. To say he wasn’t looked upon favorably by neighbors is an understatement.

George was involved in a number of lawsuits that were land-related, one of which included an elderly neighbor by the name of Hannah Jones. After her husband had passed away, Hannah had been involved in another land-related case that left her poorer and now older. When the courts finally awarded in her favor, Hannah decided it was time to go after George.

Tension grew. Words flew in the direction of the Waltons along with some rocky projectiles designed to hurt more than just feelings. During arguments stating her land had been unjustly taken from her, she promised that George Walton “should never quietly enjoy that piece of ground.” George countered and a bond was placed against Hannah, presumably to prevent hostilities between the two from increasing. Hannah brought up the complaint of George’s horse repeatedly breaking into her property and causing damage, but because of the bond she could do nothing to stop it. From here, the projectiles increased in frequency, number and size to where it seemed unlikely that one angry could be responsible.

According to the written accounts of Richard Chamberlain (Chamberlayne as the alternate spelling), the secretary of the colony of New Hampshire, such attacks occurred during his stay at the tavern. Published in London a few years after his visit to New Hampshire in 1698, in his 7,000-word written account, “Lithobolia: or The Stone-Throwing Devil,” Richard writes much like a journal format to the powers that be, how “Stone, Bricks, and Brick-bats of all Sizes, with several other things, as Hammers, Mauls, Iron-Crows, Spits, and other Domestick Utensils” had been thrown about for nearly a quarter of a year. In his manuscript, Richard declares the events were not natural, but “praeternatural” and happened by means of witchcraft.

On one Sunday evening during his stay, Richard woke to hear many rocks pelting the sides of the house and upon the roof, noisily, and from an area suspected to be not far from the gate between Walton’s land and his neighbor, John Amazeen, a gate that on more than one occasion was found on the ground ripped from its hinges. As Walton and friends were arriving home and having been assaulted with pelted rocks, the clatter of the people retreating into the home at the late hour further woke Richard from his daze.

Shortly thereafter, one of the woman saw stones thrown down the hall and yet upon investigation found no one. Then a few pebbles rained on Richard and another guest seemingly from the ceiling. While retreating to another room in the house, a large rock had been hurled at Richard’s head as he shut the door. There seemed no escape from the invisible antagonist able to materialize rocks from thin air. They were surrounded.

Many of the stones had been thrown with enough force to bounce back a few yards into the room. One stone had been found in a pane of glass but rather than breaking it became lodged, the hole from which it was extracted the perfect shape of the stone.

The entity seemed to especially enjoy creating a racket, with stones repeatedly mortared at pewter items on shelves and candlesticks that were knocked to the floor. On occasion, the stones were hot to the touch, as if just out of the fire. Having collected several groups of stones and marked them for counting, the assembly found the stones disappeared as soon as their backs had turned.

Richard, while nodding off after a period of quiet, woke as the assault began again, this time with a stone reportedly weighing 8 1/2 pounds, which had struck the door hard enough to open it. When Richard looked into the hallway and others had come from downstairs, again no person was found, and if someone was present, no means of escape. Just as he lay half asleep, a brick from a nearby fireplace made an appearance. He would occasionally wake to find stones on the stairs. 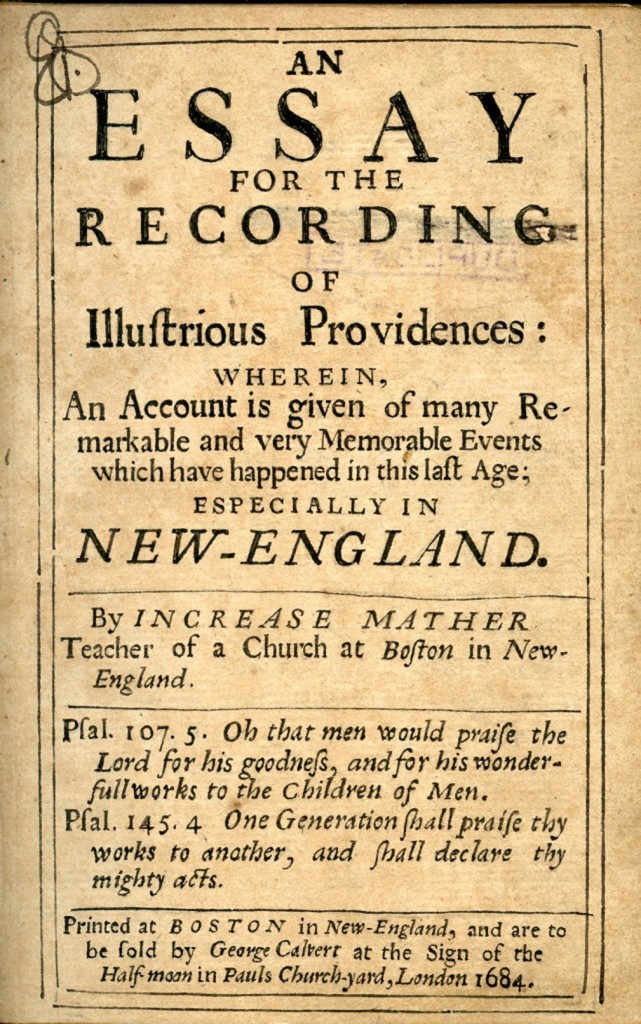 The next morning, a spit typically in the corner by the hearth seemed to have come down the chimney and speared into a log. A pressing iron also by the fireplace had been flung into the yard; not the first object nor the last. On one occasion, a mysterous hand witnessed throwing stones.

The attacks continued outside the house as well. George and company found themselves victims of peltings while walking through the yard. Workers in the field were occasionally the target of flying objects. In the absence of corporeal bodies, several witnesses spoke of a whistling sound, Devilic moanings, or that of trampling, like a colt would make.

One evening, one of the guests decided a musical instrument was in order to soothe the nerves of the house, a conduit of entertainment. But a short time after they began to play, a boulder rolled into the room followed by an avalanche of smaller stones. Weeks of these encounters both in and out of the house would continue. Finally, George and his wife had had enough.

They reverted to a traditional folk remedy as an aid to rid themselves of the unseen foe, an elixir of bent pins and urine heated in the hearth. As this was considered white magic instead of black, it was a more widely accepted practice. One account states a brick fell from the chimney and broke the pot in which they were boiling the strange brew. Another states stones fell into the pot and spilled the contents. Each attempt was futile, resulting in lost concoctions and no end to their pesky poltergeist.

An agitated George confronted his neighbor, Hannah, whereby he accused her of being a witch, causing their misery. She likewise rebutted with the accusation George was a wizard. Both accusations were relatively common during this time and came with weighty consequences if the subject was thought guilty. However, Hannah’s claim may have defeated her purpose, for it was known that only a witch could know the identity of a wizard. Her own mother, Jane, had been accused of witchcraft for many years, which did not play favorably in Hannah’s defense. George brought the case to the council in Portsmouth, which summoned George and the elderly woman. En route to the proceedings, George was hit with three fist-size stones, one of which “broke his head” and left a wound that he showed to the council as evidence.

Other cases of Lithobolia sprang up as claims of similar incidents occurred in Connecticut and Maine. Rev. Joshua Moody of Kittery went to Increase Mather to explain the activities of Lithoboly (stone-peltings) in Portsmouth and Berwick. As the states saw an increase in these matters, Salem was no doubt also included at some point. Even though the events of the Salem Witch Trials were ghostly in nature, Lithobolia was mentioned. 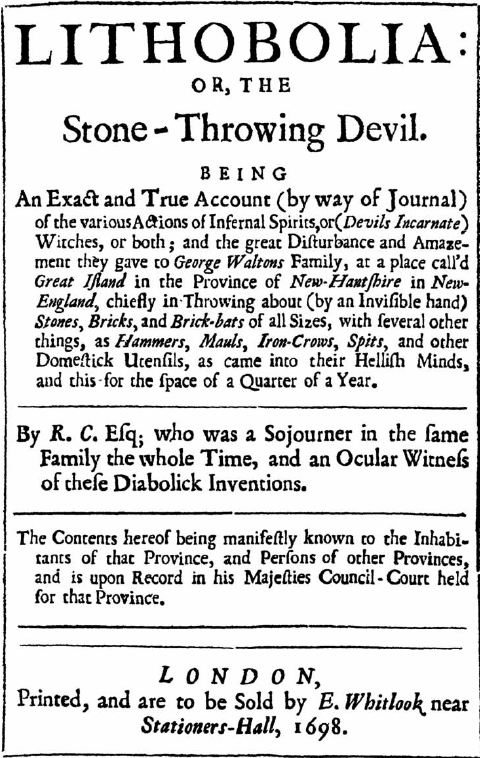 Increase Mather wrote of these events in his book, “Remarkable Providences: An Essay For the Recording of Illustrious Providences” (Boston, 1684). His name may be familiar as the father of Cotton Mather. Both were prominent Boston Puritan ministers with varying views on witchcraft and the Salem trials. In his book, Increase emphasizes the Puritan view of witchcraft and supports the existence of apparitions, witches and other anomalies, of bricks and stones thrown by invisible hands in the homes of other families in New England, along with ashes from chimneys, iron hooks hanging by hearths slamming against walls, and of objects materializing. In one such instance, a man awakened to a large hog in his home and yet the entry door was closed.

In his book, “The Devil of Great Island” (April 15, 2010), Emerson W. Baker goes to great lengths to research this phenomena. In it, he fills in a number of details and history left out in most manuscripts. Whatever the judgment of land or witchcraft against George Walton or Hannah Jones, we will never know as the records are lost and the trials longer than either party. It is known that George passed away first and Hannah was never tried as a witch. And whether the events that took place were supernatural or an elaborate hoax, only the dead know for certain. Salem may be notorious for hangings, but the wave of neighbor accusing neighbor throughout New England seemed to have a firm foothold in Great Island, New Hampshire.