This new brewery is a welcome addition to Concord 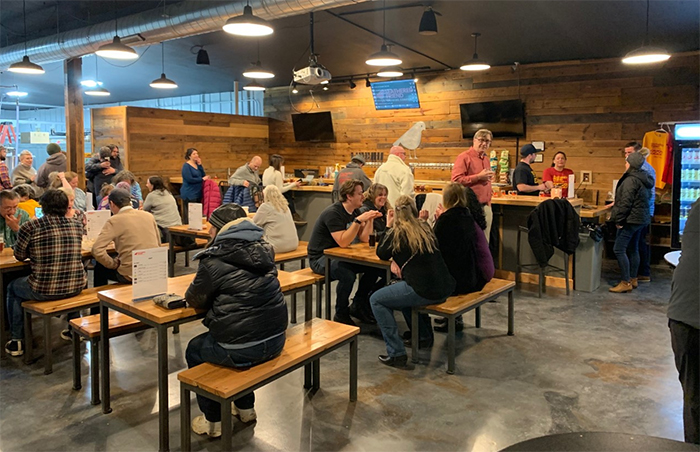 Tucker Jadczak had dreamed about opening his own brewery for years. Now was the time.

I met Tucker several years ago when he and his head brewer Ryan Connor were working at Concord Craft Brewing Co. on the other side of town. When I heard they had a new venture called Feathered Friend Brewing in the works, I had to pay them a visit.

The fit-up was still in construction phase when I first popped in, and the sound of power tools filled the air. I walked in the back door like I owned the place, sort of a trademark move for me, and yelled out a greeting in case anyone was armed (this is New Hampshire). Ryan came around the corner with a smile and yelled “MHP!” We arranged to schedule a time where I could return to talk about water treatment, my new bag and the ostensible reason for my visit.

A few weeks later I returned to find much progress had been made — furniture was in, the bar was finished and beer was eagerly waiting to be consumed. As the great Paul Simon said, “who am I to blow against the wind?” There was a good reason I scheduled this appointment for 4:30, and that reason was soon poured and placed in my hand.

As I Fly is an American stout weighing in at 7% ABV, and it is simple. Simple in all the best ways. In a time when brewers are adding anything sweet to stouts, from chocolate and milk sugar to HoHos and breakfast cereal, and pushing the alcohol to 12 or 14%, a simple well-made stout is a welcome sight. Roasted with a hint of clean bitterness, this beer was all too easy to finish. We discussed how Concord water quality impacts the brewing process, a topic I know quite well, and spitballed some solutions to compensate for the low flow rate and volume of water that their building received. I asked about their soft opening, and tried to weasel an invitation by offering to write this piece. The things I do for my editors!

A few weeks later, I ventured to Concord for the soft opening with my friend RJ, who not only likes good beer but is also my boss. Always multi-threading, gentle readers. We got there 10 minutes after they opened the doors and literally got the last two seats, there must have been 50 people in attendance.

RJ grabbed a blueberry-raspberry sour called Drippy for himself and a stout for me, as I wandered around and greeted the folks I knew. The Concord beer and hospitality scene is small but tight and vibrant, so it took me a while to work the room and find my beer. Ed and Deb Jadczak, Tucker’s folks, were helping on the bar, and Ryan and Tucker periodically wandered over to our table. 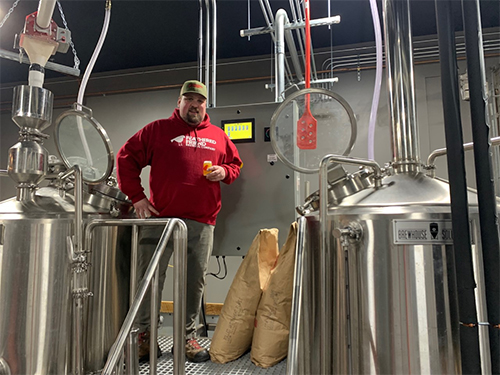 At some point, another sour and another stout materialized, so I grabbed the sour to switch things up a bit. Ed from Blueline Draft Systems was holding court near the brewhouse, Dale and Jeremiah (good customers from my brewery-owning days) were keeping their table in stitches, the beers were drinking quite nicely, and the Feathered Friends engine seemed to be firing on all cylinders.

At one point, Tucker stopped by and we chatted about beer being in his blood. As it turns out, his grandfather, DJ Reardon, once owned a large Anheuser Busch distribution company in Massachusetts. With one eye on the past and one on the future, Tucker is already planning fundraising events and looking to community involvement as a key to growth and continued success. As only the third brewery in a city almost 45,000 people, there is plenty of opportunity to be had. They have the added benefit of having Smokeshow BBQ right next door. Smokeshow has built up quite a reputation for old-school Texas style BBQ in their little location on Fort Eddy Street, and this expanded footprint will be sure to bring in lots of new folks. There is a natural symbiosis between brisket and beer, and I anticipate both businesses will gain customers from each other. The plan for now is to sell the beer exclusively at the brewery, but public demand is a beast you must sometimes feed.

As the evening progressed, things seemed to go without a hitch, or at least any hitches were effectively hidden from the public. RJ and I put on our coats to head home, and Ryan and Tucker came over for the requisite “hug with MHP.” Tucker was smiling like the canary that ate the cat, and he said “It is exactly what I wanted it to be.” He reconsidered for a second, and added “It is exactly what it should be.” From where I sit, I couldn’t agree more. Until we meet again, at a bar or in my backyard, keep your glass full!