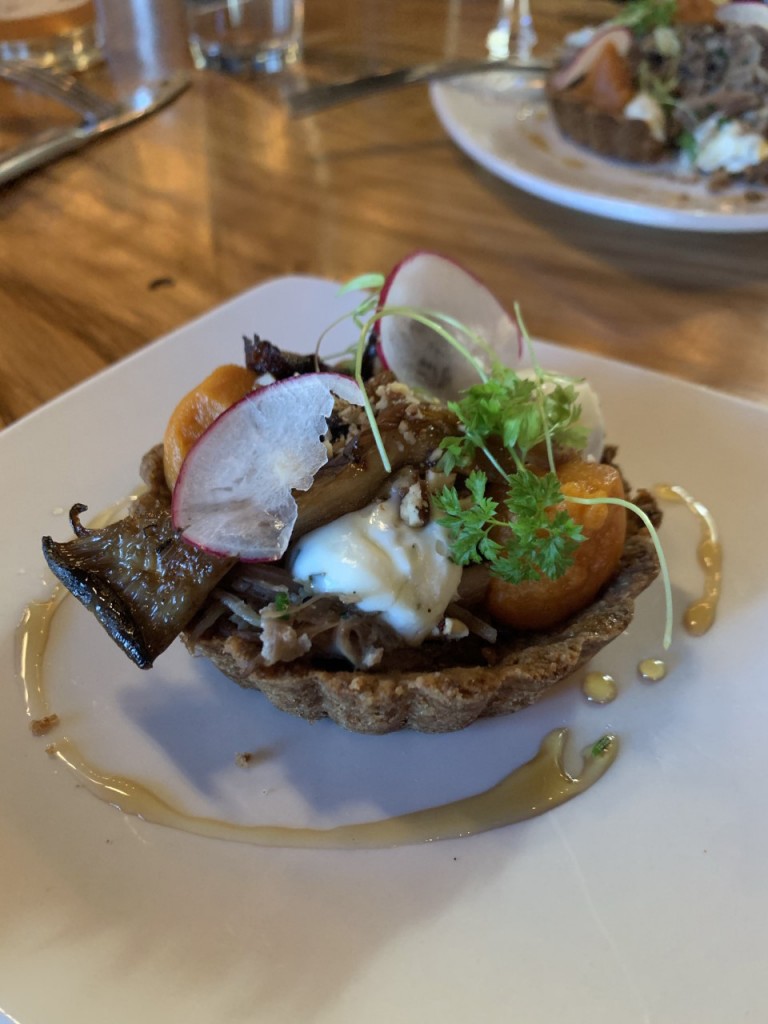 Pop-up restaurants are fairly new to the New Hampshire food scene, but they are essentially an opportunity for a publican to allow another chef and staff to take over to present a different vision for just one night. It might be as simple as a brewery letting a taco joint set up shop for the evening, or it might be a whole lot more. When I heard, after the fact, about several pop-ups featuring a “Nomadic restaurant” called Dahlia, I committed to paying more attention to their social media feed. When I saw an ad for a pop-up they were organizing, hosted by Industry East, I cancelled the plans I already had and made reservations.

Industry East owners Dan Haggerty and Jeremy Hart have been frequent co-conspirators in my column from their days at The Birch to their recent independent venture. I love these guys, but this is not their story. This is the story of Lauren Foster Berry and Matt Berry, proprietors of perhaps the only nomadic restaurant in the state — Dahlia. The couple met at Greenleaf in Milford and decided to do something different after COVID-19 changed the hospitality scene a year ago. When I asked Matt about the concept, his answer was precise and succinct, like the answer an executive chef would give a line chef in response to a problem: “The restaurant industry was at a transition point — it called for unprecedented solutions.” The goal was to create a fine-dining pop-up experience without the long-term overhead of bricks and mortar. Their team had run several sold-out events at places like Dunks Mushrooms in Brentwood (plant and fungus based), Noodz in Manchester and Otis in Exeter, and I looked forward to trying their food as I walked down Hanover Street with my wife.

Greeted with hugs by Dan and Jeremy (scoff if you must), we were shown to our requested bar seats. I met Matt, who it turns out went to culinary school with Jeff Martin, executive chef for Industry East, which only served to build my anticipation of a great meal. After the obligatory shot of Fernet Branca with the crew, we settled in to overindulge. Matt apologized that I would not get to meet Lauren, who was home with their baby, as we ordered cocktails. My wife Charlene had a Foxy Drip of tequila, Aperol, cherry heering, pineapple, lime and cinnamon; I selected a Gentleman’s Choice, made with mezcal, orange/carrot shrub, lemon, honey and Thai chili, and I stuck with those all night, as Charlene lost the DD coin toss.

Baker Erin channeled her Mexican, Russian, Polish and Irish heritage with a whiskey currant brown bread, which is leavened only with baking powder, and served with a dollop of bacon jam. Self-restraint was required to not ask for a big plate of just this. The next dish was a play on scallops and bacon, with a nod to I.E.’s potato salad, also with braised and pressed pork belly, miso carrots and parsnip, fiddle fern mustard and pea shoots. This dish practically screamed “SPRING IS HERE!”

The third course was prepared by chef Jeff, and featured housemade warm ricotta and duck confit. Chefs Jeff and Matt bantered black and forth about culinary school and the state of the hospitality industry as the plates were delivered, and it was a great reminder of what a collaborative and resilient community we have in New Hampshire hospitality. Next up was a blue fin tuna tartare on a sorghum puff pastry, with micro wasabi, burnt onion, popped sorghum and caviar.  The sorghum balanced the oceanic pop of the caviar beautifully, and once again, I felt as if I could have just eaten this dish all night. This would prove to be an ongoing theme.

Goose from Julie’s Happy Hens farm would be the star of the next course, including sunchokes lacquered in pine, foraged morel and hedgehog mushrooms and moss cake croutons. Yes, moss cake croutons, and they are exactly what they sound like, and they were perhaps the biggest happy discovery of the evening for me.

Up next was the Million Dollar Dog. A wagu beef hot dog on brioche bun, with foie gras mousse, truffle relish, shaved truffle and gold leaf. Quite a pricey two bites, but the richness of flavor and textural contrast was worth its weight in gold. The following course was a veal ribeye with pan-seared fennel, savory cheesecake with herby sourdough and cabbage purée. I was starting to doubt my ability to carry on, until my wife reminded me of my dedication to the written word, so carry on I did.

The last thing I remember (after my third or fourth Gentleman’s Choice) was a glorious vision of bourbon vanilla poundcake, topped with bitter orange curd, preserved cherry compote, Angostura creme and salted bourbon creme. I remember smiling, likely with bitter orange curd in my beard, as I thanked everyone for a wonderful night. I remember getting into the passenger seat of my wife’s new and unfamiliar car, feeling postprandial and most content as we drove the half a mile home. I remember sleeping quite well, and somehow waking up the next day with enough notes to recreate the evening in my mind. Book a reservation for Dahlia’s next pop-up, I promise you won’t forget.

Coming up on Sunday, May 23 is a dinner focused on open-fire cooking — seating will be limited, so make sure to an eye on Dahlia’s Instagram and Facebook page. Reservations open Saturday, May 15 at 8 a.m. You can also sign up for email notices at their website, as well as find information on how to book a private event.