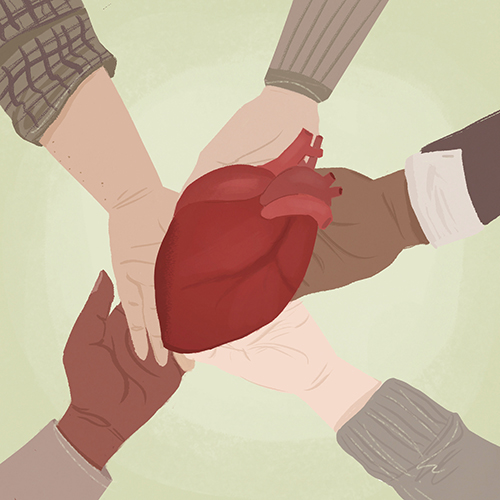 Gary Harper’s heart didn’t announce in sudden or dramatic fashion that it was giving out on him. Instead, it slowly weakened over time.

“I’d always been a very active person,” says Harper, a Manchester resident. “I did a lot of yard work, [and] a lot of sports.” But in his mid 40s, even simple activities, such as bending over to tie his shoes, left him winded. “I became short of breath, less energetic, tired — just tired.”

Harper was diagnosed with congestive heart failure, a chronic, progressive condition. “It changes your life,” he says. “You think ‘I’m young, I’m active, I’m in great shape, overall I eat very well and take care of myself.’ You think ‘why me?’”

Now 57, Harper has a left ventricular assist device (LVAD) implanted in his chest to help his heart pump blood, and his name on a heart transplant waiting list. He attends Catholic Medical Center’s support group for heart failure patients, which he says provides a tremendous psychological boost to attendees.

Similar to Harper’s situation, many of the people who attend CMC’s group are likely future candidates for a heart transplant, but some have already had a heart transplant, and can offer valuable insight and reassurance to those who anxiously await their turn.

Getting a heart transplant “is a long road … [with] a long recovery,” which can make attending a support group particularly helpful, says Robert C. Capodilupo, MD, FACC, director of the cardiomyopathy program and noninvasive cardiology at Catholic Medical Center’s New England Heart & Vascular Institute in Manchester. (Concord Hospital, Elliot Hospital and Portsmouth Hospital are among the other New Hampshire hospitals that offer support groups specifically for cardiac patients. Check your local hospital for availability.)

Understandably, many people feel overwhelmed when their doctor tells them they’re going to need a heart transplant, Capodilupo says. Participating in a support group allows patients to share their concerns, fears and experiences with peers. “As a heart-failure cardiologist and director of the program, I can talk until I’m blue in the face because I’ve read about all this stuff,” Capodilupo says, “but I’ve never been through it. [The group members] can tell you in plain terms what’s it’s like,” and help ease the anxiety of group attendees who are still waiting for a new heart.

During the meetings, patients commonly raise a variety of topics related to their heart condition, including the financial pressure associated with having a major health problem, and spouses who attend meetings — and who may be “just as weighed down” with worry as the patients, Capodilupo says — can seek guidance on the practical and emotional difficulties they face, including the stress of being a caregiver.

Despite the fact that a couple of hours are set aside for discussion at each CMC cardiac support group meeting, group members often continue the conversation in the hallway afterward, Capodilupo says, eager to talk, share and learn.

Harper knows he might need to endure a long wait as he remains on the list of people who need a new heart. But attending the support group helps him cope, and the LVAD pump inside his body “has made a big difference” in how he physically feels day to day. He has learned to pace himself and to listen to his body. “It might say, ‘OK, you need to stop a little bit,’” he says. “I used to try to push through it. You get a cold, you work through it, you sweat it out, you keep going — I can’t do that anymore.”

Knowing that he’s on the transplant recipient list gives Harper hope. “In my mind, there’s light at the end of the tunnel.” At the relatively young age of 57, he says, “I’m still young enough to be able to do a lot.”

And he finds inspiration in the people he meets at the support group who already have new hearts. “You look at these people [who have had a heart transplant], and they’re just as happy as can be. They feel blessed, they feel lucky, they’re working and they’re back to a normal life. So, if I have to wait a little while, I guess it’s worth the wait.” Harper chuckles and adds, “I don’t really have a choice. So I might as well be positive about it.”