Cheers! Distilleries to Visit This Summer 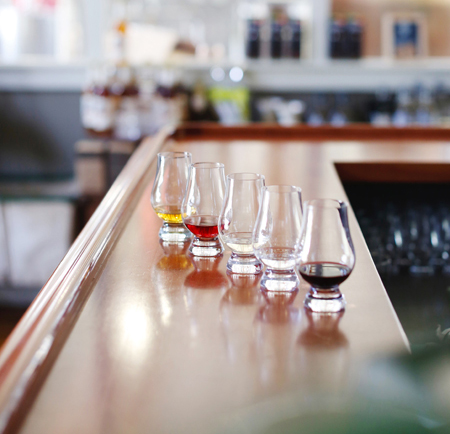 New Hampshire is home to a number of distilleries that produce scores of unique, creative spirits. And with the state reopening, it’s time for a visit.

Here are just five New Hampshire distilleries with some great tasting rooms that are open — with safety restrictions — and ready to host tastings.

While you’re there, consider picking up a spirit that you won’t normally find on the shelves in the state liquor stores. Quite often, there are options you can only get at the source. 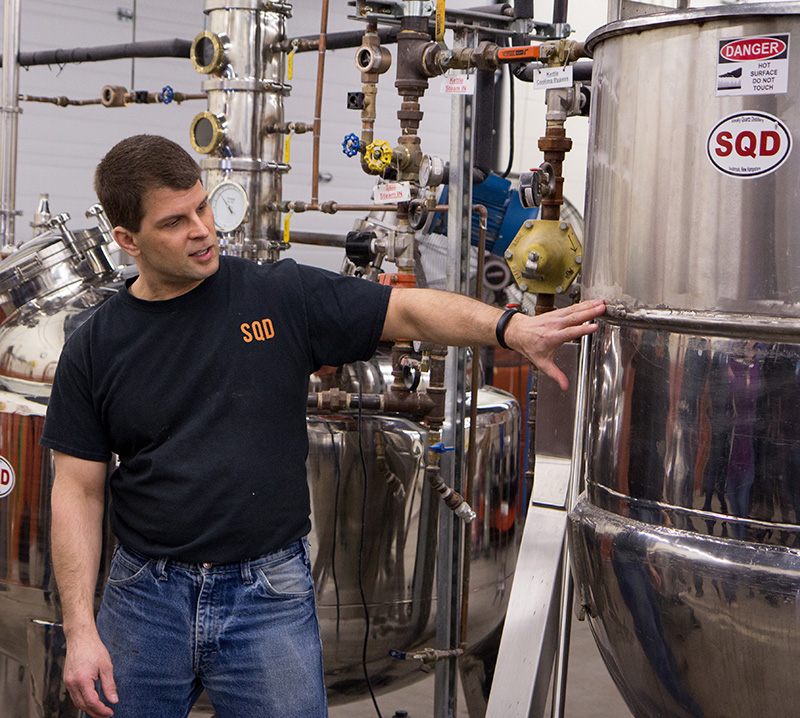 Kevin Kurland was hunkered down in a shelter at Baghdad International Airport in 2010 as mortar shells peppered the area when inspiration struck.

In that bunker, Kurland, a member of the New Hampshire Air National Guard, came across a newspaper article predicting a bright future for craft distilleries. It was then he first began to formulate the plan that would become Smoky Quartz Distillery in Seabrook.

The veteran-owned and operated distillery, named for New Hampshire’s state gemstone, is preparing to observe its seventh birthday. Kurland and his team moved into the Lafayette Road (Route 1) destination on — appropriately — July 4, 2013. The tasting room walls are lined with reclaimed wood from a barn built in 1850, and a chalkboard from an old Pittsfield schoolhouse serves to alert visitors about upcoming specials and events.

“It’s great to see people walk in the door again,” he says. “People are in a much better mood now that they’re getting out and about.”

While he remained busy during the pandemic making hand sanitizer, as many New Hampshire distilleries did, he took the opportunity complete some exterior renovations, updating the color scheme — now an attractive barn red with sand colored shutters and a black door.

Distillery Exclusive: Barrel Strong V5 Bourbon
“We’ve got a special barrel-strength bourbon — a single-barrel selection I personally do. It’s 125 proof so it’s got a good hit on it, it’s really flavorful with great, strong vanilla, nice pepper from the barrel and some nice caramel on the backside.”

How does Kurland suggest experiencing a whiskey at this strength? Pour it in a glass with a big ice cube and sip. 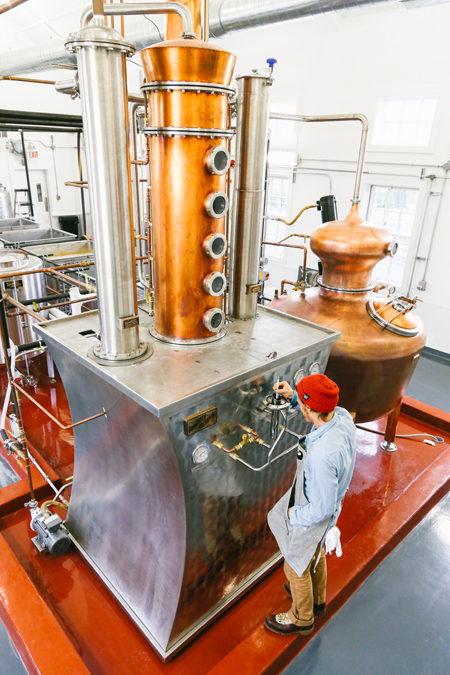 A distiller does his thing at Tamworth Distilling & Mercantile. Courtesy photo

Artists, writers and innovators have been drawn to this village at the foot of the White Mountains for generations — making it the perfect home for Tamworth Distilling and Mercantile Owner Steven Grasse’s latest foray into the spirits world.

The founder of Hendrick’s Gin and Sailor Jerry Rum, Grasse conceived of this small-batch spirits producer, housed in a stately 19th-century building on a street named for one of the town’s former residents –— President Grover Cleveland — not far from where he spent time as a youth.

The tasting room looks right into the distillery, dominated by a 250-gallon copper still custom built by Vendome, in Kentucky, and outfitted with a brandy helmet, whiskey column, gin basket and rectifying column.

Tamworth is currently holding tastings outside on tables in a beautiful backyard that sits alongside the Swift River. (Not a bad thing at all, though rainy days will find sippers doing their thing in the barrel house, nearby.)

“People are absolutely coming back out,” Tasting Room Manager Abby Drake says. “We’ve definitely seen a turnaround. A lot of people are stocking up on home bar supplies.”

Tamworth carries a line of various bitters, pickles and items that add real character to cocktails.

If you’re feeling a bit hungry, fear not — while the Art in the Age Café is temporarily dark, visitors can fill up on coffee, pastries, donuts, to-go sandwiches and an outstanding sourdough bread with pesto and olive oil, thanks to a partnership with Osteria Poggio in Center Harbor.

Step into the retail space/mad scientist’s lab proper, and you’ll discover a curious line of spirits inspired by, infused with and created from the Granite State environment just outside. Fresh water from the Ossipee Aquifer and ingredients sourced from a 150-mile radius (as much as possible) has resulted in whiskeys, gins, ryes, liqueurs and cordials with a quirky, retro, yet distinctly New Hampshire vibe.

Distillery Exclusive: Tamworth Garden Apiary Gin
“It was just released, and it has local honey and wild botanicals foraged by our distiller, Matt [Power],” Drake says.

Formulated to pay homage to the flora that populates the Tamworth area, you’ll discover a polished evergreen flavor without any sharpness, helping the red clover wild honey deliver sweetness on the palate. 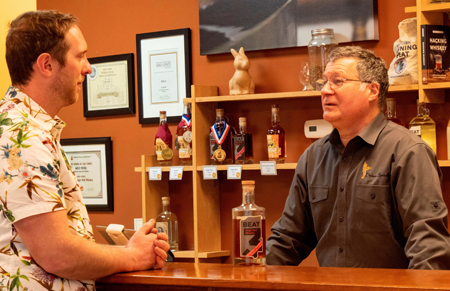 Andy Harthcock is always a welcoming presence at his Nashua distillery, but since the state began to open back up, he’s feeling particularly warm.

The tasting room is open, tours are starting to book, and Harthcock is back in his element.

“Being able to taste our products here in the distillery is great,” Harthcock, co-owner, along with his wife, Cindy, of Djinn (the “D” is silent) Spirits says. “That’s the handy thing about being able to walk into a distillery — it’s a try before you buy thing.”

The Harthcocks have created a comfortable tasting room just off of Amherst Street in Nashua, where visitors can sample some of the many spirits crafted on the other side of the wall. Among them, the Beat 3 Single Malt Whiskey, Krupnik — a spiced honey spirit crafted from a 500-year-old recipe by Lithuanian monks — the Henry Knox American Dry Gin (for making Djinn and tonics, no doubt,) and the Beat 3 Blended Rye, among others. And while Nashua may not be on the beach, Andy Harthcock’s handiwork will make you feel like it is.

Small-batch and 21% ABV, it’s perfect as the days get longer and temps go higher. But when it’s gone, it’s gone, because Harthcock will next be moving on to Code Name Scarecrow — an autumn-themed beverage formulated to taste like apple pie. 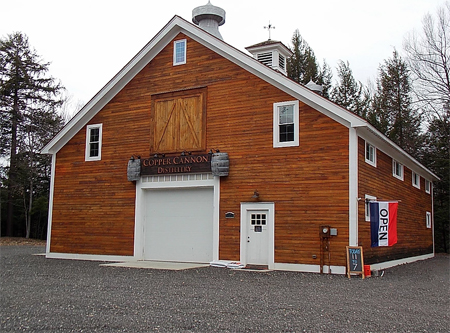 “You can tell people have not talked to people in a long time,” Amacker says, laughing. “Everybody’s a chatterbox — they just want to talk about whatever. It seems like the isolation has made everyone a touch crazy.”

That’s fine with this LSU-trained mechanical engineer. Like much of the state, Amacker’s Chesterfield distillery has re-opened, with restrictions, allowing him to resume relating the story of the founding of Copper Cannon to those who are ready for some good spirits conversation. Amacker and his cousin, Chris Arnold, traveled to Ireland to visit local distilleries a few years ago. After a few drinks, the idea was born. Returning home, Blake worked on his first still, which had a long, slender appearance that resembled a cannon (lower case “c” at the time.) Next up: find the perfect building. The post and beam barn that houses Copper Cannon began its life as a medical bottling facility that originally sat on the corner of Emerald Street in Keene. Blake and Chris found a spot to relocate, added cupolas and air handlers from the Bardwell Farm and on March 5, 2016, the team turned out its first distillation.

Step inside, and visitors are greeted by Cannon, the distillery dog — a friendly Weimaraner who will run to the door to see who’s stopping by. At the tasting room, samples are available for a variety of spirits, including its top seller, the double-distilled Copper Cannon Maple Rum. 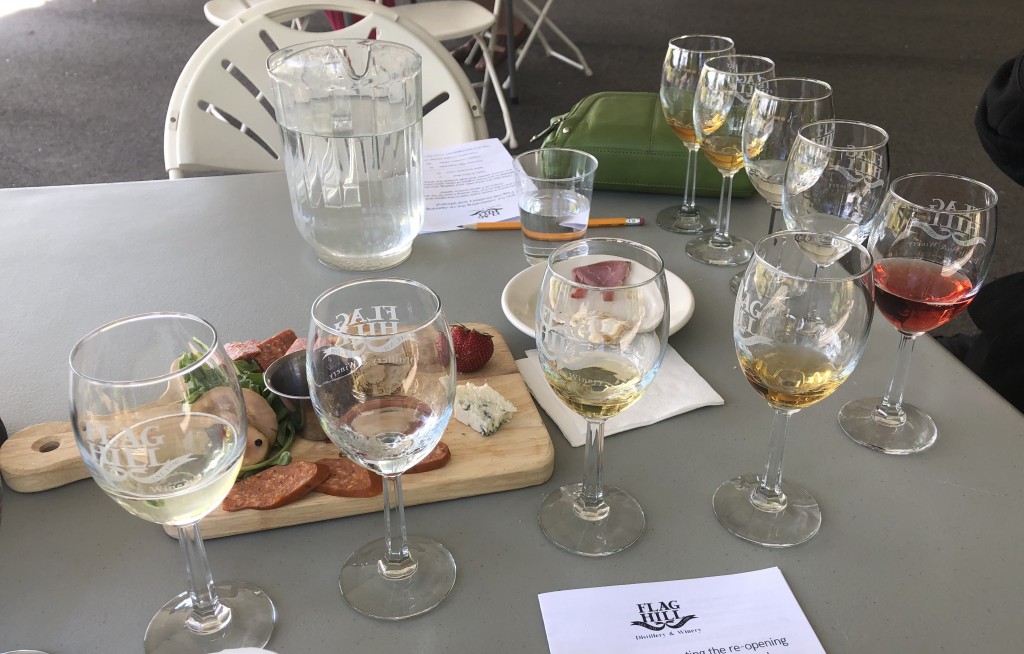 There’s a lyric in an old folk song that goes “If you don’t give me rye whiskey I surely will die.” It was made popular over the years by the likes of Woody Guthrie, Pete Seeger and Tex Ritter — and if you spend enough time around North River Road in Lee, Brian Ferguson.

Ferguson is the distiller at Flag Hill Distillery and Winery, and if you’re lucky, you just may hear his voice echoing off the barrels aging a series of rums, liqueurs, bourbon and, of course, rye whiskey.

Flag Hill Straight Rye Whiskey isn’t the peppery, spicy spirit you may think you know. It’s made in the largely forgotten Monongahela style, giving it butterscotch on the nose, soft honey notes on the palate and a little weight and sweetness on the finish. It’s made from 85% Flag Hill grown rye and 15% malted barley, aged in small batches of four 53 gallon barrels.

Ferguson learned his trade in the Finger Lakes region of New York, and then the Cayman Islands, where he made rum.

Distillery Exclusive: General John Stark Vodka
Produced from a combination of apples, mostly Macintosh grown in Concord, it’s fermented for up to 10 days using two separate yeast strains. Distilled at 190 proof over 24 hours, before being cut to bottling proof. The process allows a touch of the fruit into the final product, creating a subtle, delicate vodka.

For the Love of Chocolate

The Ultimate Food and Drink Gift Guide for 2021