Learn about these Granite State Olympic athletes with accolades in skiing, hockey and swimming 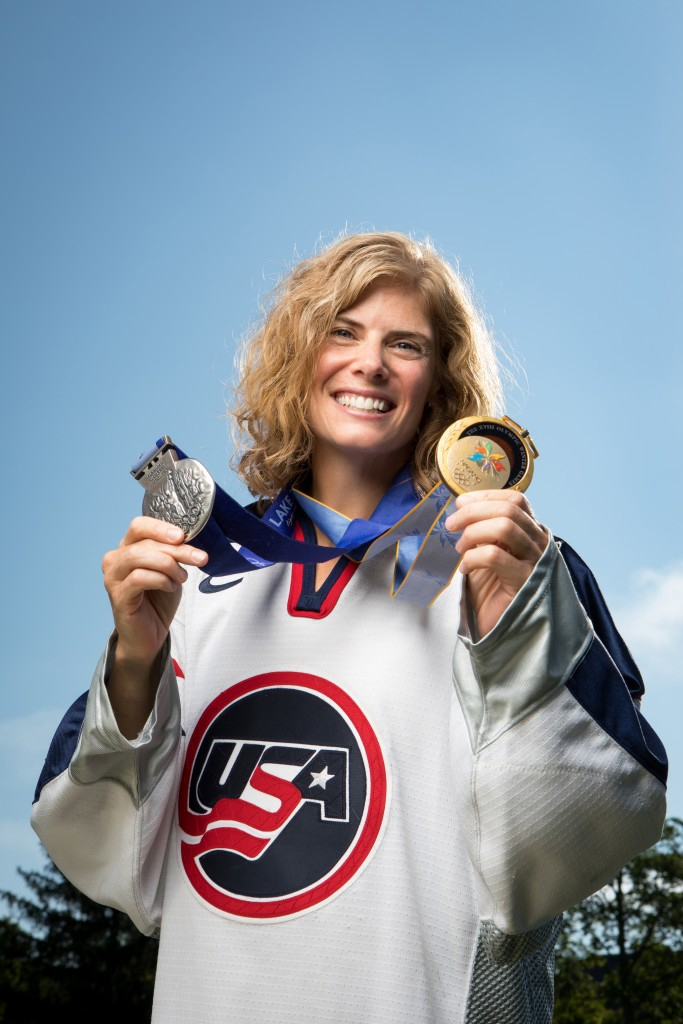 This photo of Tara Mounsey originally appeared in our “New Hampshire Women in Sports” feature story from the September 2020 issue. Photo by Kendal J. Bush

Welcome to the fifth installment of our Women’s History Month series. This week features three famous athletes from New Hampshire. Many female athletes had to break through the typical “boys-only” barriers in their respective sports, and through perseverance they found great success at the highest level of sport.

Tara Mounsey was a key member of the first Olympic women’s ice hockey team to win gold in the 1998 Winter Olympics in Nagano, Japan. She was joined by quite a few female Granite Staters, including Katie King of Salem and UNH stars Tricia Dunn, Colleen Coyne, Sue Merz and Karyn Bye Dietz, who was one of the most prolific scorers in school history with 100 goals and 64 assists.

She first began skating at a family friend’s gathering on New Years Eve when she was around 4 years old, and her hockey career took off from there. She played on the boys’ and men’s hockey teams throughout her childhood, including at Concord High School where she was named the NHIAA men’s hockey Player of the Year. In addition to winning gold at the 1998 Winter Olympics, Mounsey went on to win a silver medal in the 2002 Salt Lake City Winter Olympics. For each of these accomplishments, she was named to the All-World Teams. Throughout her hockey career, she also won three silver medals at the World Championships.

A graduate of Brown University — where she played as a defenseman on the women’s ice hockey team — and Boston College, Mounsey now works as a nurse practitioner and assistant coaches hockey at a local school in Massachusetts.

Penny Pitou started skiing when she was just 4 years old, and became a household name in New Hampshire for her exceptional athleticism and skill. At Laconia High School, Pitou was unable to join the ski team as it was for boys only. However, she hid her hair underneath her hat, requested that her friends call her Tommy, and her skiing career continued. Pitou was the first American to win a medal in the Olympic downhill skiing event in Squaw Valley in 1960.

When she was only 16, Pitou won the slalom, downhill and alpine combined championship races at the Junior Alpine Championships. A year later, she was named to the U.S. Ski Team for the Winter Olympics in Cortina d’ Ampezzo, Italy. She participated as a member of the U.S. Ski Team throughout Europe, instead of returning home to school at Middlebury College.

In 1976, Pitou was inducted into the U.S. Ski and Snowboard Hall of Fame. After her skiing career ended, she pursued a wide range of related occupations, including running ski schools in New England and working as a ski industry fashion consultant. Eventually, she formed Penny Pitou Travel, one of the biggest agencies in the region, that focused on organizing ski trips and European tours.

Jenny Thompson holds the record for most Olympic gold medals ever received by an American woman, including at the 1992, 1996, 2000 and 2004 Olympic Games. She competed in the butterfly, freestyle and relay events. In 1992, she broke a 60-year-old record for the 100-meter freestyle, and in 1999, she broke an 18-year-old record for the 100-meter butterfly. In addition to her eight gold medals, Thompson has received many silver and bronze as well.

When she was only 14, Thompson placed first in the 50-meter freestyle event at the 1987 Pan-American Games. Growing up swimming in Dover, Thompson went on to swim at Stanford University and compete in the National Collegiate Athletic Association championship competition each year, winning the 100-yard freestyle event during each of her four years. She holds five individual world records, 23 national titles and 26 National Collegiate Athletic Association titles.

During and after her exceptional swimming career, Thompson attended Columbia Medical School, completed an anesthesia residency at Brigham and Women’s Hospital in Boston, and a fellowship at Boston Children’s Hospital focusing on pediatric anesthesiology. She lives in Portland, Maine, and works as an anesthesiologist.