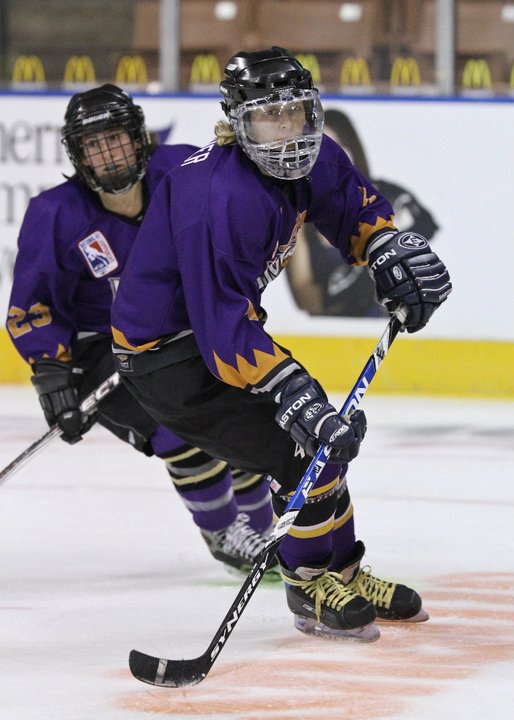 Michelle Collier, backed up by Betsy McCombs, turns up ice during a game at the SNHU Arena. Courtesy photo

In the late 1990s, women’s hockey was beginning to gather momentum. The U.S. Women’s team had recently won Olympic gold in Nagano, and young girls and women were beginning to realize their own potential on the ice. But it was still difficult to find ice time, never mind enough players for a league.

It was in this environment that Bedford’s Michelle Collier began to formulate a plan: To build a women’s hockey team that could compete at tournaments in the New England, Canada and, eventually, the national level. In the end, it worked. The New Hampshire Sr. Lady Monarchs competed twice in USA Hockey Nationals — once in Milwaukee, Wisconsin, and placing second in the 2011 tournament just outside Detroit, Michigan.

The team flourished through much of the 2000s, but between players starting careers and families and others moving home after college, play has slowed. Collier, a senior product manager for Gentex Corp., stays active: She ran the Boston Marathon in 2013, rowed the Head of the Charles in 2015, ran Mount Washington in 2018 and still laces them up whenever possible.

“I was playing last year with some guys,” Collier says. “My friend Ron said, ‘Come on down.’ When the others heard someone named Michelle Collier was coming, I think they just assumed it was a French Canadian dude. They saw me and were like, ‘huh?’”

What’s your hockey background?
Collier: “When I was little I went skating with my mom. I saw hockey players and wanted to do that, but I didn’t really get a chance to play until after college at UNH. In those ancient days I may have been able to play on their practice squad, but I ended up going to hockey camp with Coach Kay (Karen Kay). I was one of two adults there.”

For even more amazing Granite State athletes, check out these New Hampshire women who are at the top of their game:

What prompted you to start the New Hampshire Lady Monarchs hockey team?
Collier: “I had been playing with other teams, but they weren’t interested in being competitive. I played in the South Shore Women’s Hockey League, in Marlboro, Massachusetts, but it was a bit of a drive to play down there. Still, that was the kind of competitive hockey I wanted to have. I coordinated with the folks at the Tri-Town Arena in Hooksett who worked with us to find affordable ice time and we started to build out a team. They already had the Junior Monarchs, so we worked to create a whole family of Lady Monarchs. They were very supportive of it.”

How did you get other women on-board?
Collier: “It was a combination of creating flyers and putting them up at gyms and rinks, and then word of mouth. There were people I knew from playing stick-and-puck, and they knew people who knew people. That’s how I got Jodi Mackie on board, who was so helpful. We were technically for ages 19 and up, but we had a couple of high school players that we got waivers for. We ended up contacting girls in college who either didn’t have a college team or chose not to play for their college team. That’s how we ended up with a lot of players from New England College and St. Anselm.”

What were those early years like?
Collier: “We were horrific that first year. Imagine a D-minus level team, and we might’ve been that. We barely had enough people, and then trying to find other teams to play was a challenge. Occasionally we’d play against an A-level team, and if we got the puck over our own blue line we got excited. We didn’t have coaches initially, but we were able to secure coaches and gain more players to the point where we had two teams for a while. Fortunately, we had a variety of different people coaching us. We never had a female coach, but we had some great people.

“When we first started playing, people were driving an hour, hour and a half to Concord on Tuesday nights at 10 p.m. because it was the only place to play. As we put the team together and wanted to be more competitive and got coaches and worked hard to fundraise, we set our sights on how to play as a team more than as a pick-up squad.”

Was there a turning point?
Collier: “When we joined the South Shore Women’s Hockey League. There was some hesitation because it meant a commitment to one practice during the week and then games on the weekend that were an hour, hour and a half away. But people realized how it could change us as a team, and then we could start going to tournaments. It made a big difference. After South Shore, the league grew, and we started adding more and younger players who stayed with us for a longer time. We got more experience, and started setting our sights on going to Nationals. Then, actually getting to Nationals and coming in second was amazing.”

How has women’s hockey changed since then?
Collier: “There are more young players starting younger. The fact that we do have girls’ high school hockey now is great, and the prep teams are amazing. The level of college hockey is outstanding, and while it was an Olympic sport before we started, the level of the teams in the Olympics has risen. Now, you’ve got Kendal Coyne Schofield competing at the NHL Skills Competition kicking all their butts.” (Note: Coyne Schofield’s fastest skater time bested three NHL skaters’ times at the NHL All Star Skills Competition in 2019.)

What kind of women made up your roster?
Collier: “We had a handful of younger players the first few years, but the variety of women and their backgrounds was amazing. We had two to three high school-aged kids, then a few college players, but most of the team was comprised of 20ish-year-old players to 50ish-year-old players. We had a lot in their 20s to mid-30s most of the time.

“I’m looking at a team picture on my wall right now and I see people who worked in finance, human resources; Darlene is in the Forestry Service and environmental stuff, one was a veterinarian, another was a librarian and teacher, an engineer and then we had girls from St. Anselm and New England College.”

What was a personal high point?
Collier: “When we came in second in Nationals in Detroit in 2011. It took a lot of work to get there, and while it was somewhat disappointing to lose to a team from Utah, that was our high point. To go from not being able to get the puck out of our zone across the blue line to coming in second in the entire country in your division was rewarding. That came from a mix of coaching and good players.”

Where do you think the Lady Monarchs fits in the context of women’s hockey in New Hampshire?
Collier: “There were other teams in New Hampshire, but I don’t think they were looking to do the same thing as us. They fielded very good teams and went to local tournaments and did well, but I don’t know if they had the same aspirations. There was also the challenge of having to go through States and even more, Regionals, and play teams in Massachusetts and Connecticut, Rhode Island and Maine. A few times we got our heads handed to us. But it was great. The Monarchs were the (AHL) team in town at the time, and to get to wear that same logo was great.”