Learn to Cook Outside With Cast Iron 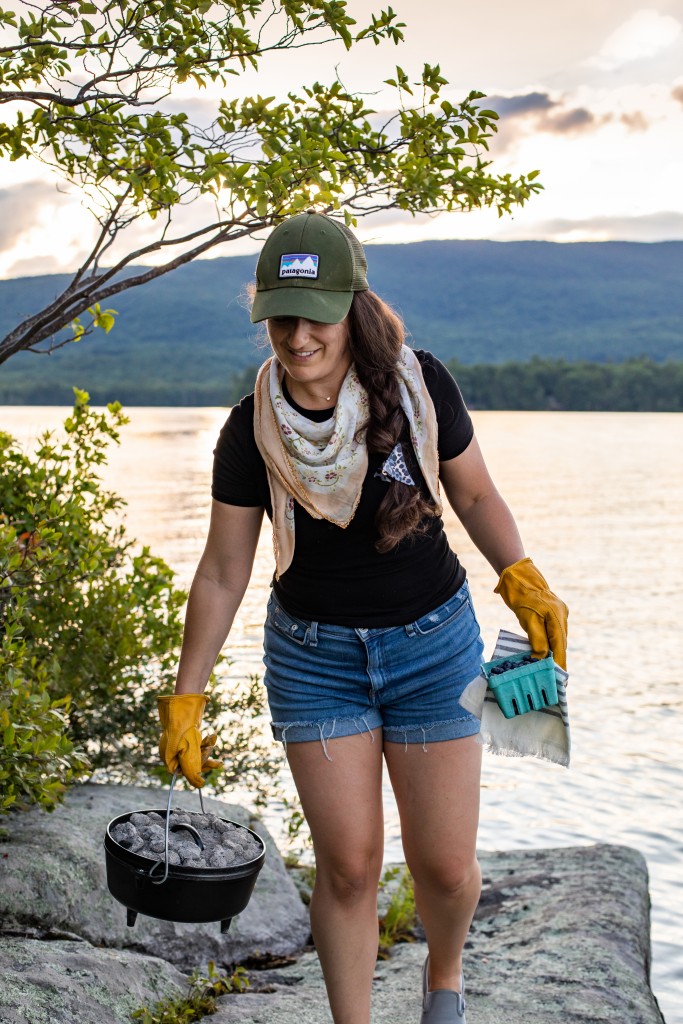 With gloved hands and tongs, I kneel beside the fire pit, pulling hot coals from the pile and placing them on, under and around a black pot. I’m trying to keep the temperature inside the pot as close to 325 degrees as possible so this lamb can simmer into a stew. It’s been cooking for just over three hours now.

Earlier in the day I left home with the car packed. A friend was bringing a lamb shank he had salted the night before while I had gathered all the cooking supplies for the trip.

The camp kitchen for the day included ingredients for a slow-simmered lamb stew: a bottle of white cooking wine, butter, salt and pepper. A cooler packed with ice would keep the cold things cold, and a deep-set, 10-liter cast iron Dutch oven pot would do the work. Helpful items included some firestarter, a cutting board, a camp knife that could be dulled without worry and a bowl for washing vegetables. Coals are easier to use to control heat than firewood, so a charcoal chimney and some charcoal came along as well.

And — so important — heatproof gloves and tongs. Without them, cooking with fire becomes a series of frustrating and dangerous improvisations — like trying to scoop hot coals with aluminum foil without spreading ash, burning hands and swearing. My gloves and tongs are banded together and stored on top of my bag.

On the way to the campsite, I pulled off the road and stopped at a farmstand to fill the cooler with whatever looked good and had been harvested that day  — a yellow onion, foraged mushrooms, bright orange carrots, a freshly clipped bulb of garlic, a bundle of celery and some small potatoes.

When I arrived at the campsite — this one was by the lake — my friends had already started the fire. They came over to the car to help unload and start prepping the vegetables.

When we thought we were ready to cook, we lit the charcoal chimney and watched the coals turn red.

The Dutch oven sits next to the fire in the ring but away from the heat produced by the logs. Using the tongs (always with gloves), we place 13 coals under the pot and 26 on top — each coal gives off about 25 degrees of heat, and you double the amount on top to account for the heat you lose when it rises. We’re estimating and trying to keep the temperature at 325 degrees. It doesn’t take long for the pot to heat up.

We oil the pot and use the hot bottom of the pan to sear and brown the meat. The carrots, celery, onions and garlic go next, until soft, then the white wine cut with some water covers the meat. Potatoes and mushrooms are added once the stew has come to a boil, then a few coals come off and it’s left to slow cook on a simmer. 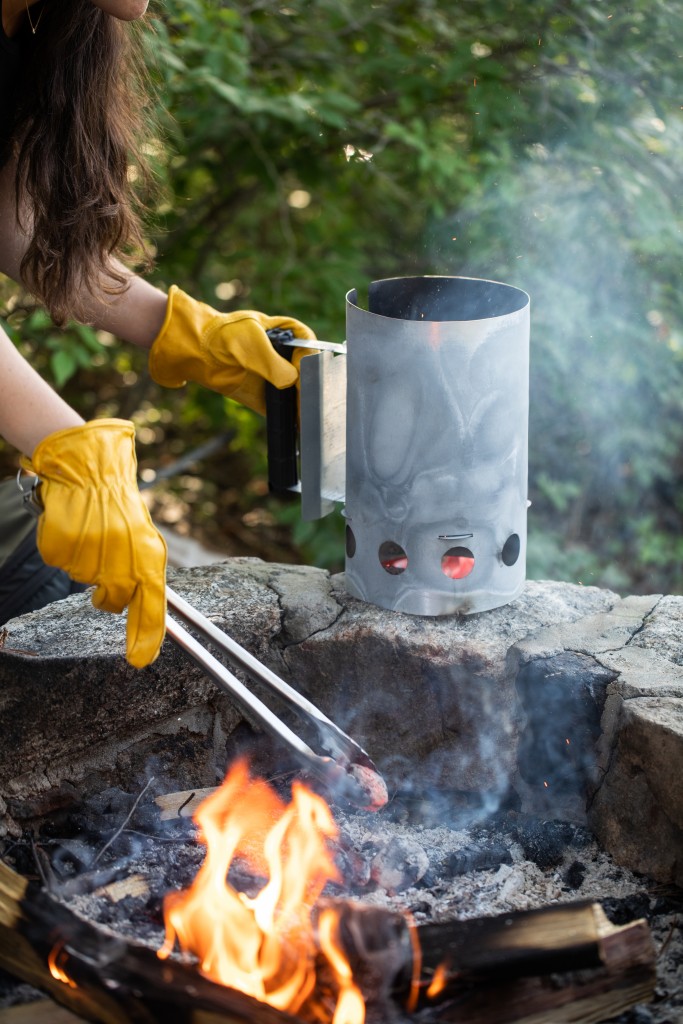 Heatproof gloves and tongs are crucial when cooking over fire. Photo by Jenn Bakos

We sit back and trust that inside this black pot something is happening. We resist the urge to poke and prod. The fewer times we lift the lid, the less chance of getting ash from the coals into the meal.

Our verdict after this first effort? Delicious, and we can’t wait to try it again. Maybe next spring when the world begins to open up after the winter months.

During quarantine, I dreamt of cooking outside. Planning meals in my mind created a distraction from the news, from existential concerns, from the uncertainty of the pandemic, from the fear of death and dying. I spent many days imagining — simmered stews, braised meats, desserts — flavors blended by searing heat and steam.

From inside the apartment the memory of the smell of the pines, the feeling of the breeze through the trees, the sun setting behind the mountains as the stars came out — these daydreams brought peace even after 30, 45, 70 days, waiting for our country to make sense.

I made my quarantine meals in a bright-red enameled Le Cruset Dutch oven — every meal, because I knew one thing: Anything that could be cooked in a Dutch oven with a home stove could be cooked outside over a campfire. Any skill I practiced at home would make those campfire meals better, more flavorful, more robust. I burrowed into cookbooks, poured over recipes, spoke with chefs on the phone for tips about sourcing seasonal ingredients, tested new spices and experimented with meals. The practice of learning kitchen skills — chopping carrots, celery and onions into uniform pieces, creating layered flavors with pan sauces — relieved the stress of uncertainty and fear of confronting the infectious disease. I developed a quarantine ritual. Each Sunday, I would salt, brine and roast a Vernon Family Farm’s chicken in a Dutch oven until it was gloriously crispy and tender. I pledged I would make it outdoors.

As the days of social isolation wore on and the summer brought more uncertainty, I realized that outdoor recreation was safe. It was OK to pack up the car with a camp kitchen and head north to cook outside. I could find a farmstand (many were open and thriving) for ingredients, then a campsite with a fire pit. And, I could do this solo — to practice, to meditate, to prove to myself that four months inside hadn’t made me afraid to venture out.

And so, I went. I asked friends if I could visit their land, reserved campsites at state parks, and even took a Boston Whaler out to Otter Island on Squam Lake to bake a blueberry pie. While many friends couldn’t or wouldn’t travel to join, I could still go. Where there is a firepit there can be a gourmet meal — along with the peace of being still in nature. 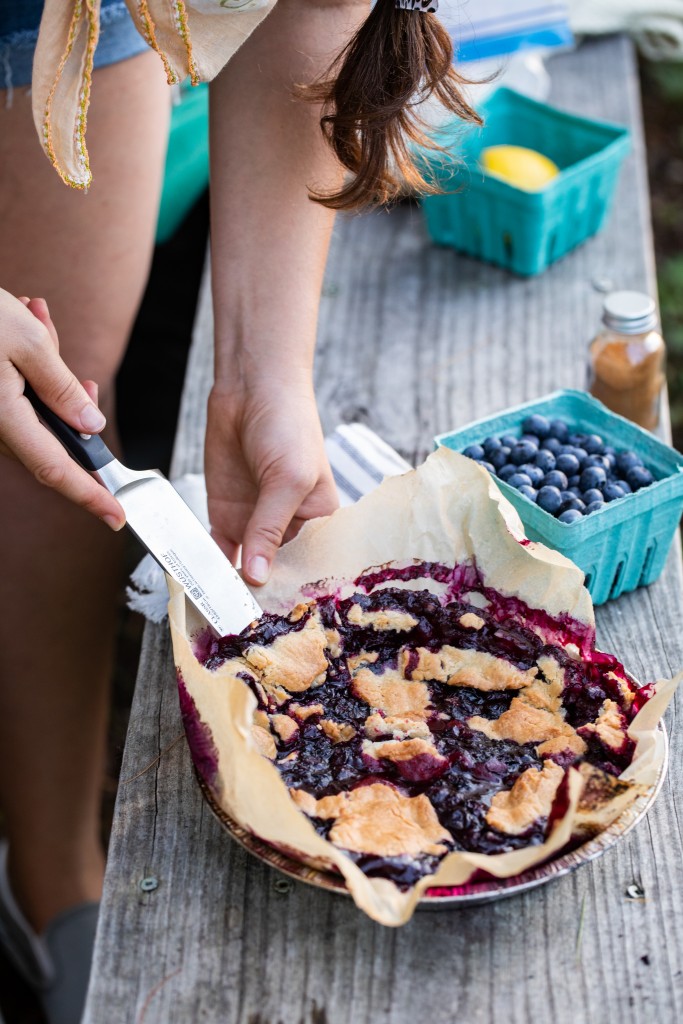 This practice became my solo escape until, eventually, one or two friends felt comfortable being together outside. Outdoor cooking became the perfect socially distanced activity — we would cook and eat outdoors. We would casually sit in camp chairs with a drink, laughing and talking over the fire as we waited for the food to be done. As if everything else in the world were normal and OK, someone would grab the tongs and check the progress. Someone else would watch the coals to make sure the replenish supply was hot and ready.

Some alchemy happens inside the pot where slow, low heat transforms ingredients into rich, flavorful meals. Outside the pot, a similar alchemy takes place.

A few hours focusing on dinner prep with our pups rolling the grass, begging for scraps as we prepared our site for dinner, created enough social connection to fuel the next phase of uncertain isolation. Outdoor cooking became one of the only ways of socializing that felt right, felt safe, felt nourishing. We could bring our own groceries and cook our own food. We could avoid restaurants and crowds. We could navigate to less popular sites and trails. We could cook anywhere.

A cast-iron Dutch oven stack is the theatrical accomplishment of a great outdoor cook. It’s a meal with each dish cooked at once with one pot on top of the other and coals layered on lids between the pots.

To graduate to this level of skill, you’ll want to have practiced a mix of dishes — maybe a stew, a cobbler and a bread — a few times outdoors. You’ll want to know how to monitor and adjust heat using the coals, and understand timing. You’ll also want to make sure the stack doesn’t tip (watch for that one leg slowing sinking into the sand).

You’ll be stacking a few pots on top of each other as the three legs fit perfectly onto the flat lids, and you’ll be working with rising heat. You’ll want to be confident you can troubleshoot, detect burning and know when to pull the pot from the heat source — otherwise you might have a crowd saying “I told you so” over a poorly cooked meal while pointing out that you should have just done it the normal way — but we Dutch-oven cooks need to try the stack because the challenge is the reward.

Now, it’s October and that cool autumn comfort that comes when noises of nature blend with the softness of sweaters and bring a serene sense of peace and hope amid uncertainty.

This time of year in New Hampshire, the temperatures range from 40-65 degrees, and we begin looking for those comforting, hearty meals. The farmstands are still open and have plenty of squash, apples, onions and root vegetables to cook with. Imagine an apple crisp, a slow-cooked pork shoulder and steamed butternut squash cooked over the fire. Imagine your sourdough starter blooming to life in a pot over the coals — browned on top and fluffy in the middle. Imagine campfire popcorn sweetened with maple sugar.

The tourists are still at bay and the campsites are open. 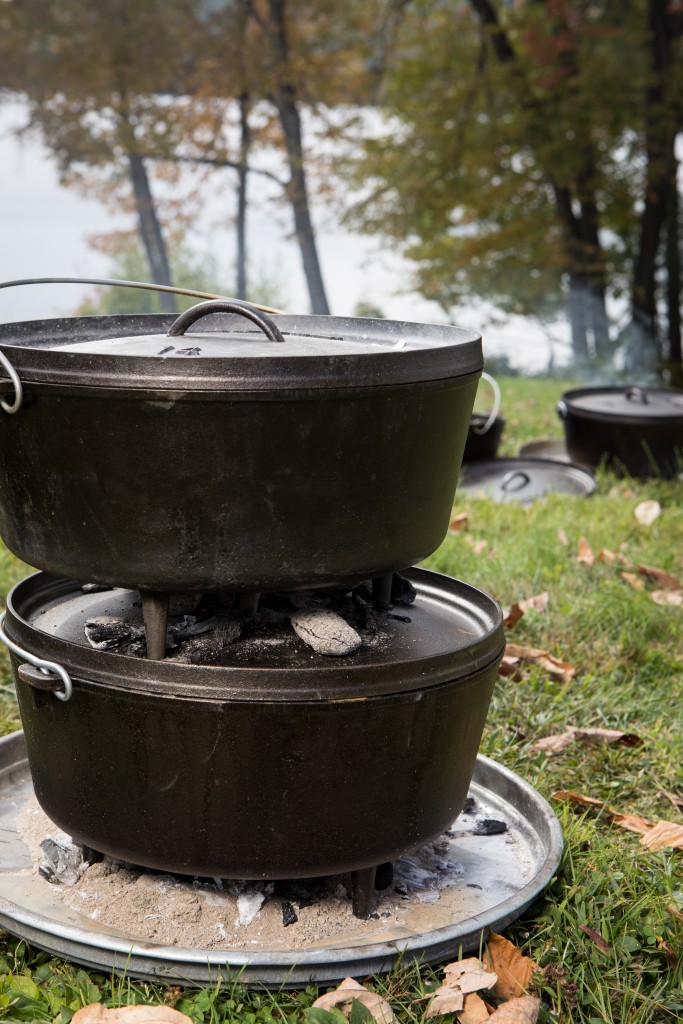 If you’ve mastered cooking over fire with cast iron pots, level up by using “the stack” method. Photo by Kendal J. Bush

Without the desire to venture far from the comforts of home, a backyard fire pit can offer space to experiment with recipes. The nearby house eliminates the chance of exposure and provides a sink to clean gear, prep food, find forgotten pantry items, and generally keeps the process simple. Regardless of the practice space, the skills will translate to a gear list and packing plan. One day when the time is right, toss the cooler in the car and set out to cook farther and farther away from home.

The main difference between indoor and outdoor cooking is time and the heat source. Outdoors, the meal takes more time and careful observance of heat levels. Meals might take between an hour to four hours to get up to temperature. When cooking over a fire, the heat is created by the coals, not the flame.

Any meal that can be made in a home kitchen with a Dutch oven can be cooked outside over the coals. From stews and soups to braised meats and breads. A cobbler, a crisp and a stonefruit pandowdy.

Last year, I started an informal group called the Cast Iron Dinner Club for anyone who would like to practice outdoor cooking and meet up for shared meals. I now cook for conservation groups, elopements and families who want to be outside together. Each time, the heavy pot comes along — it’s a worthy haul that trades heft for memories.

My hope is that more people go outside and cook together. That magic paired with our parks, beaches, backyards and campsites can offer socialization and a chance for joy and connection in relative isolation.

This craft takes patience and a bit of practice to fine-tune a variety of adjustments. But, usually, if you throw the right ingredients in the pot and cook them slow and low enough, there’s a good shot you’ll end up with an edible, if not delicious meal. 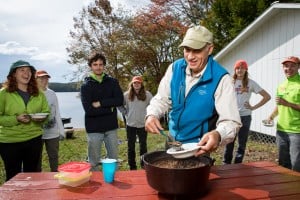 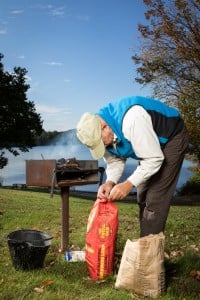 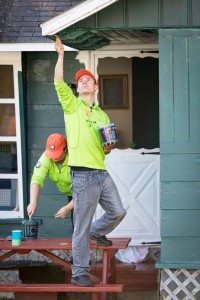 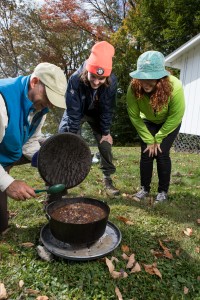 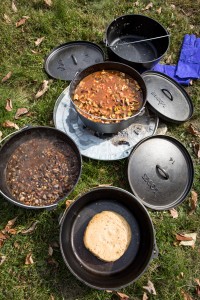 What’s the Future of Local Restaurants?

Cider Donuts (Where To Find Them and How To Make Them)

The Scariest NH Ghost Story Ever