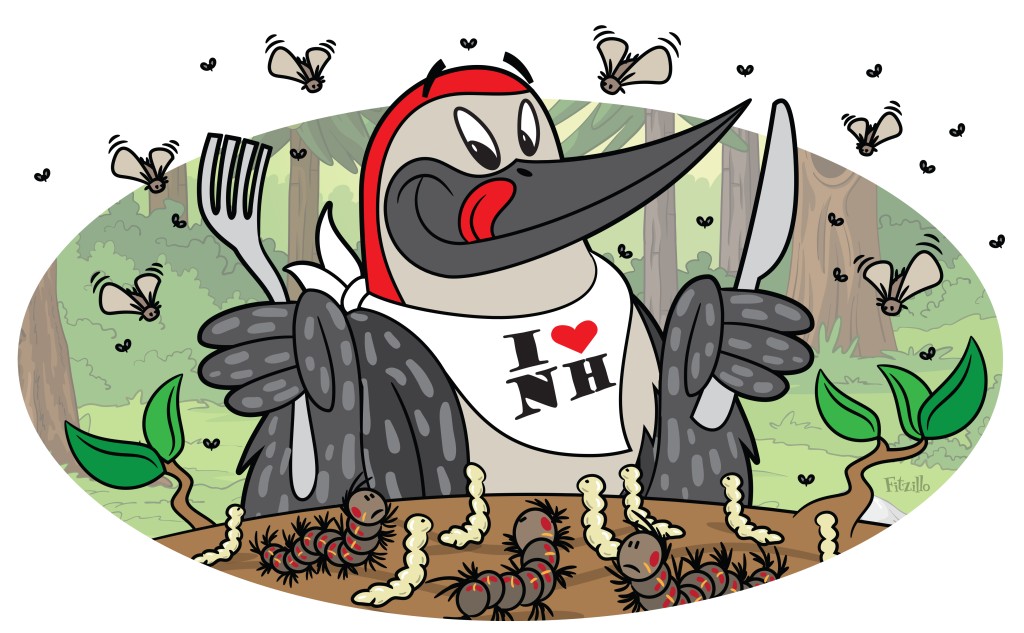 A wise woman (101 years old at the time) told me, “There’s some good and bad in everything.”

Words to live by.

Though I’ve yet to see much good in black flies. Unless you believe the old saw, “If it wa’n’t for black flies, everybody’d move to New Hampshire.” Same could be said of ticks. (Don’t get me started on ticks!)

In 1869, gypsy moth specimens (of Eurasian origin) were accidentally released in Medford, Massachusetts. They proliferated. For the last century here in New Hampshire, every seven or so years an infestation of gypsy moth caterpillars pops up in one region or another. Last time our area got hit, I could hear them munching overhead and their teeny-tiny poop rained down. They feasted on maples and oaks, but spared the big ashes between our house and the road. Gypsy moths eschew ashes.

Another good thing. Though gypsy moths denude trees, they don’t usually kill them. The emerald ash borer, on the other hand, is a killer.

EABs invaded Michigan in 2002. Since then, they’ve killed tens of millions of trees, expanding their territory — south, then east, and north.

Didn’t take them long to do in the big ashes between our house and the road.

EAB larvae burrow in and destroy the tree’s veins. No nutrients = dead tree.

If those big ashes fall east, they’ll take out the electric lines. (Bad.) If they fall west, they’ll land in the bedroom. (Also bad.) We own a chain saw … but, having seen too many trees fall exactly where they shouldn’t (crunch), we will hire professionals to fell the trees (good) and cut them firewood length to burn in the wood stove come winter. (Also good.)

Meanwhile, up to camp in Maine, the neighbor showed all he could decently reveal of a horrifying rash caused by the hairs of the browntailed-moth caterpillar. Luckily, he didn’t inhale. Those hairs get into your lungs, the doctor told him, you’re in big trouble, mister.

The browntailed-moth caterpillar, also an import, has only recently reached infestation level in Maine. Used to be a good cold winter would tamp down the population. Milder winters, less tamping. Jim Dill, pest management specialist at the University of Maine Cooperative Extension, put it this way: “Climate change in the winters can be a dramatic force in the population dynamics.” (Very bad.)

At least we haven’t had a browntail infestation in New Hampshire. Yet.