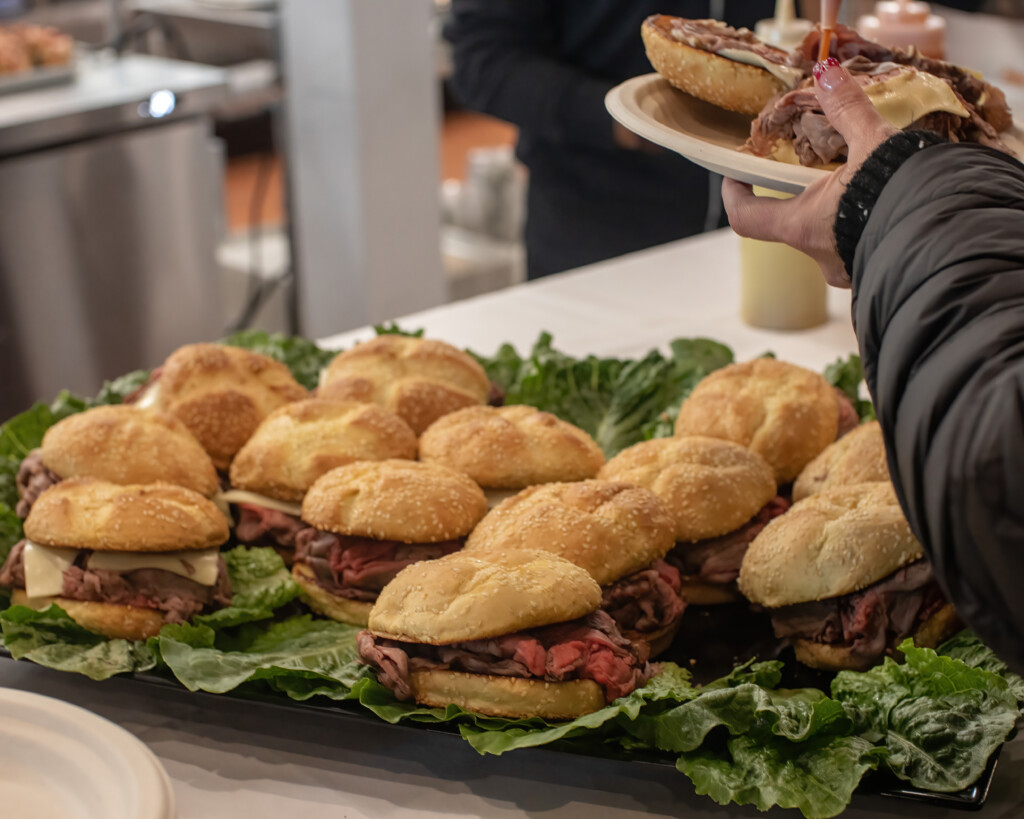 As an editor at New Hampshire Magazine, I get emails. A lot of emails. Those emails range in importance, from company meeting updates to wildly misspelled spam to Granite State businesses hoping for coverage and everything in between. And just a few weeks ago, I got an email that caught my eye like a diamond in the rough — or in this case, a roast beef in the rough, glistening between Adobe Creative Cloud ads and Microsoft Teams updates. It was a personal letter from Kelly’s Roast Beef in Salem, New Hampshire, inviting me to a luncheon celebrating their grand opening. A roast beef ribbon cutting, as it were, coronating the king of fast-food Massachusetts sandwiches in a new state. And maybe this is just a technicality — Salem, New Hampshire does border Massachusetts, after all — but I don’t care. Technicalities matter. Roast beef matters. And Kelly’s — a Bay State staple deciding after more than 70 years of meaty business to spread its wings and expand its reach across state lines — matters. I was in.

Where To Find It

Now, first and foremost, I enjoy food. I’m not picky; I’ll try nearly anything placed in front of me and devour it with enthusiasm. There’s a lot out there to experience in this life — and I’d love to try (and eat) it all, at least once. Which is why I’m embarrassed to admit I had never tried Kelly’s before, and very rarely eaten roast beef in my previous 23 years of life. There’s no legitimate excuse for my actions; the North Shore is a well-known roast beef capital, and I grew up only an hour south of Boston. I’m simply swaddled in the shame of my past ignorance. But I had seen Goodwill Hunting — and I was more than willing to spare 15 minutes to chow down on some Kelly’s.

Every good food exploit requires a trusty sidekick, and I knew just the man for the job. Max Schoenfeld (or Scoville, as he’s colloquially known) is a man with a big heart and an even bigger appetite. He’s travelled to six continents; he has a nonpareil passion for foreign cuisine; and he’s the reigning 2022 Drift Collective Dumpling Eating Champion, dominating 39 dumplings in five minutes with an additional five dumplings in overtime. The man is a beast — not to mention he’s a top-flight photographer and would be able to capture the occasion from behind the lens. With Scoville on board, my roast beef rodeo kicked off to a smooth start. 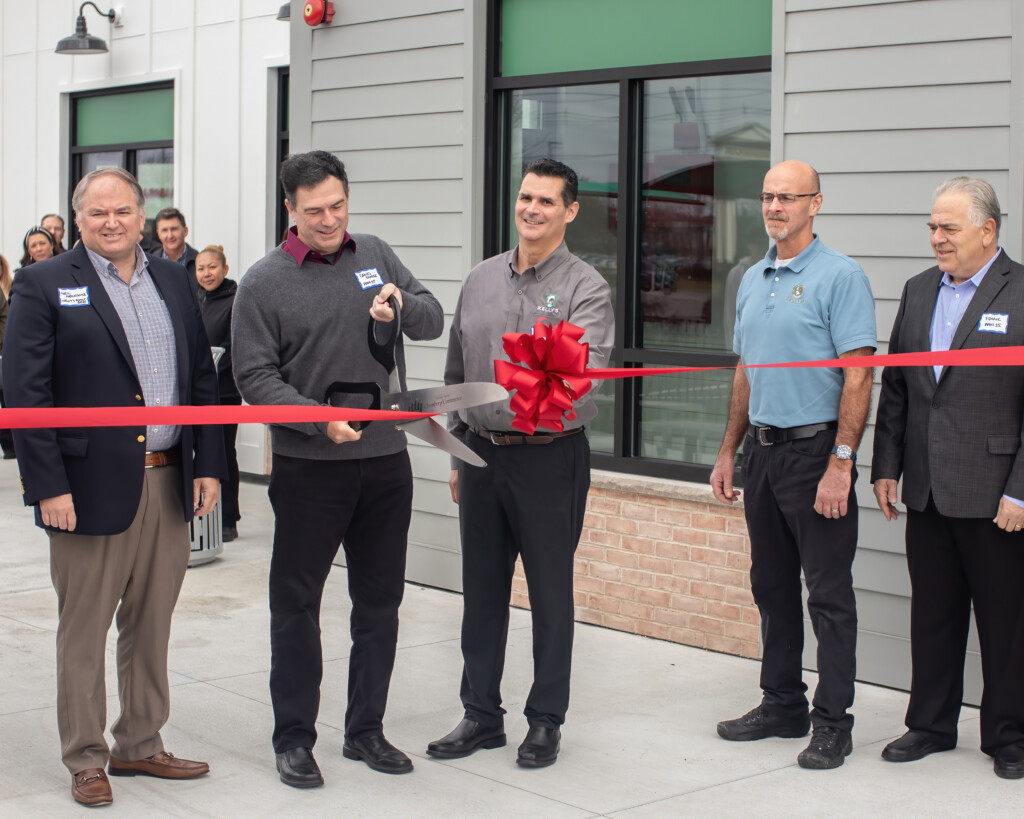 It was a gray November day — crisp and bland, very Massachusetts in my opinion. Scoville and I loaded into my Subaru Crosstrek and strapped in for a 45-mintue drive to Salem. Desiring the full Massachusetts experience, we stopped at a Dunkin’ drive-thru early on in the journey. But here’s the thing: Dunkin’ is nearly as ubiquitous across all of New England as it is solely in Massachusetts, so what am I even saying? Why draw lines between Massachusetts and the rest of New England? Would this be the first step in Kelly’s journey to becoming a New England institution as well as a Massachusetts one? Had they already accomplished this, all within the borders of Massachusetts? These were the questions rattling around my head during the 30-mile trek from Dover. That, and the soothing sounds of Jamiroquai, ample music to align the mind, body and soul for a roast beef renewal. Before I knew it, we had arrived; the brand-new green-and-white mecca lay before us in all her glory. Our destiny awaited.

The place was pretty packed. In all honesty, I hadn’t the slightest clue what to expect. I didn’t know what a semi-chain roast beef ribbon cutting luncheon consisted of. I thought we might be two of only a handful, awkward silence filling in the spaces between roast beef chomps. Scoville asked me how formal we should dress and I laughed him off, telling him we should rent suits. Turns out that wouldn’t have been so ridiculous, with a crowd primarily consisting of middle-aged men in business attire. It all makes perfect sense, in retrospect. Kelly’s is a well-known institution, and franchising for the first time with plans to open a Florida location means big business. So, suits. A majority of the multitude worked for AAM15 Management Company, which I assume invested in Kelly’s in some way, shape or form. Tony Librot, AAM15’s Chief Operating and Financial Officer, gave the first speech, thanking us for being there and explaining that Kelly’s had plans for “dozens” of new stores in the next decade. After many more shout-outs, a few additional speakers and a ribbon cutting that utilized a giant pair of scissors (where do giant scissors come from anyways?), it was time to chow. 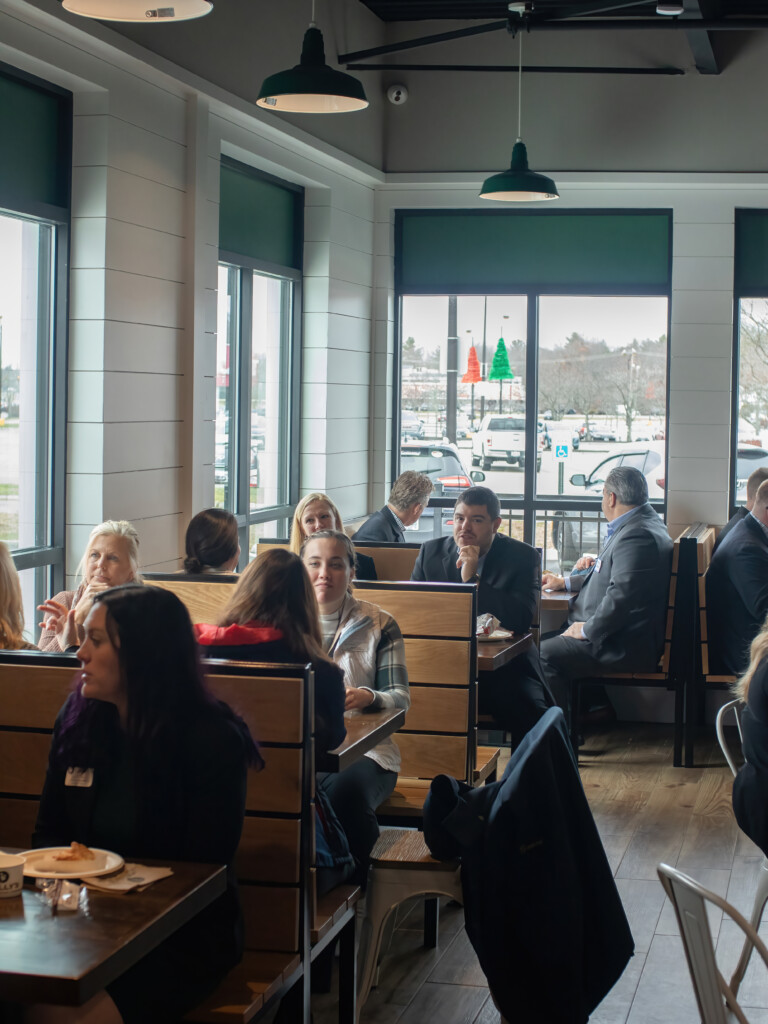 Scoville and I filled our plates, a whopping roast beef sandwich and lobster roll each. I was able to snag the “Three-Way,” Kelly’s claim-to-fame sandwich that features James River barbecue sauce, cheese and mayonnaise, while Scoville accidentally grabbed a plain roast beef, just meat and two buns. Nevertheless, neither sandwich disappointed. Kelly’s really piles on the roast beef — a mountain of medium-rare shaved pink meat in between sesame seed buns with plenty of juicy tenderness. Truth be told the thing tasted nothing like fast food. The meat bursted with flavor, the mayo and barbecue added a nice sweet tang and the warm cheese slice rounded out the taste triumvirate. The sandwich was fresh and delicious, with none of the trappings of a stale chain sandwich. But maybe my expectations were misaligned; Kelly’s is a regional food chain, after all, and opened in 1951 on Boston’s North Shore by two good Revere fellas, Frank McCarthy and Raymond Carey. According to Librot, the second generation of the McCarthys now leads the business, so it’s essentially a family-run shop expanding for the first time. Not to mention Kelly’s has some serious beef in the game, getting their kicks during the modern-roast-beef boom of mid-20th century Boston. So, yeah. It’s an undoubtedly delicious sandwich. The lobster roll tasted surprisingly good, too — and I say surprisingly because getting fish at a chain is always a gamble, but man, this lobster roll was really good. Served cold, a substantial portion of lobster meat fills a grilled New England-style hot dog bun with light mayonnaise coating and some crunchy chives littered about. All in all, a very filling, satisfying meal. Even Scoville — a globetrotter who’s ascertained a very particular compass for food quality — cracked a smile while indulging in the beef. He liked — no, he loved it. He grabbed a Three-Way on our way out, to save for dinner later that evening.

I learned a few things from my Kelly’s Roast Beef rodeo: If you get invited to a roast beef ribbon cutting ceremony, always accept. Regional food chains are usually very good, and sometimes exceptionally good. Even if a Kelly’s stop puts you 15 minutes in the hole, it’s worth the trip, no matter what Ben Affleck says. And finally, always acquiesce to the charms of local cuisine. The handwrought flavors will do the rest. 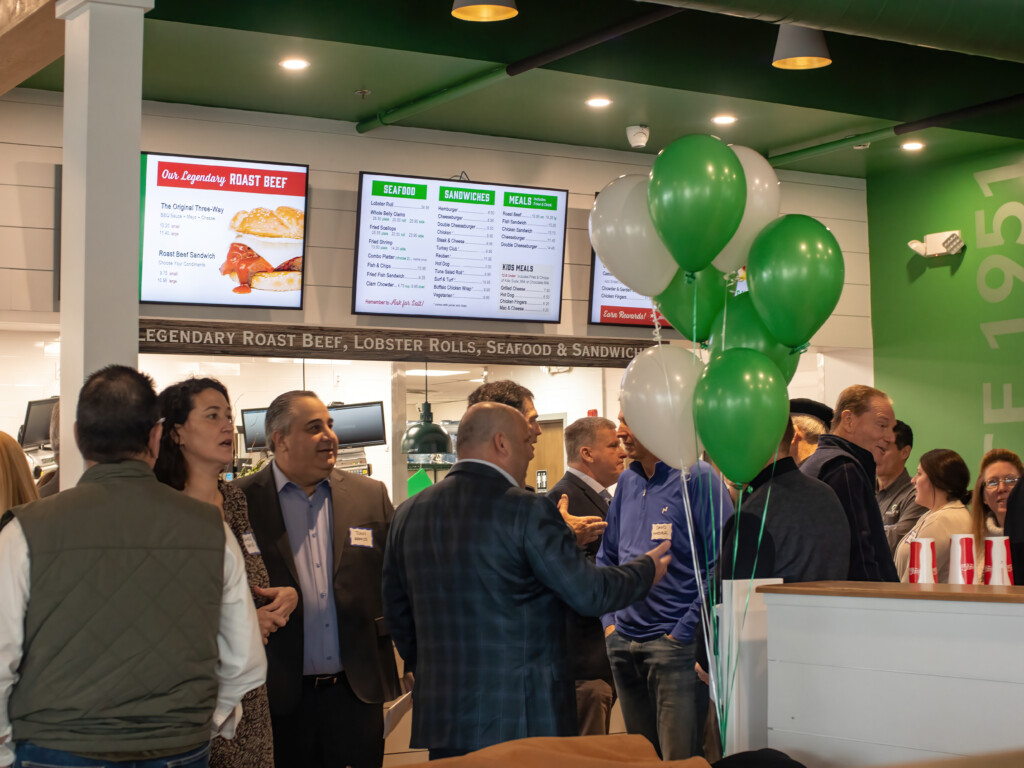 Employees from AAM15 Management mingle with other luncheon attendees. Photo by Max Schoenfeld