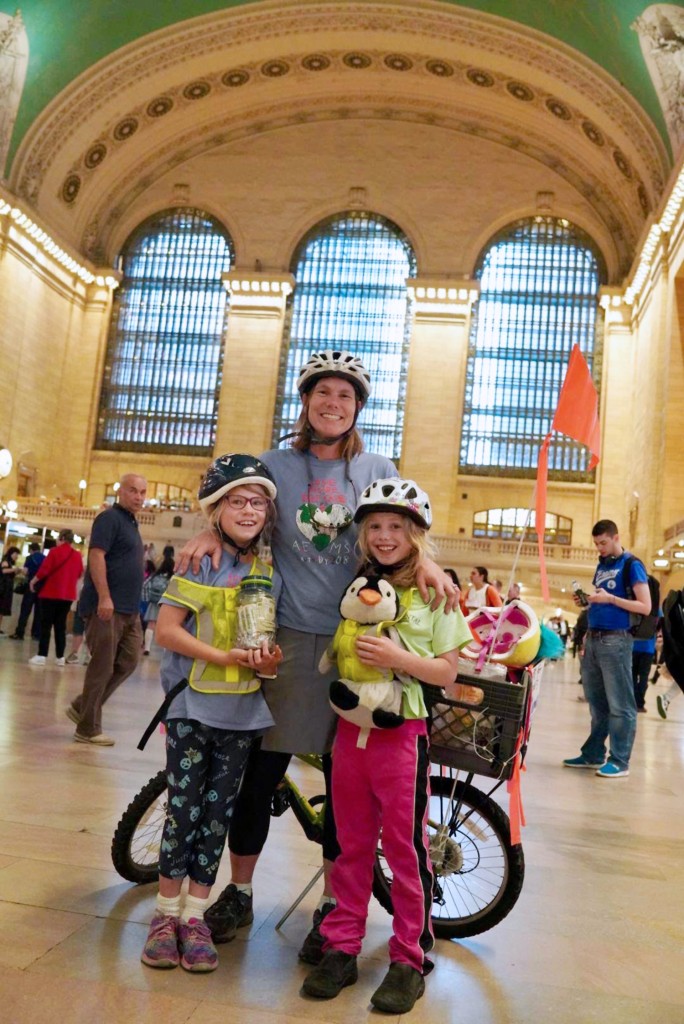 Azalea Morgan, age 9, has big plans for her future. She’d like to be a preschool teacher, and maybe to work at a wildlife sanctuary. But she’d also like to be an environmentalist.

By many measures, Azalea and her sister, 10-year-old Ember, are already there.

In 2019, the pair embarked on a 250-mile trek from their home in Andover to New York City ahead of the Youth Climate Strike, propelled solely by public transportation and their own bicycling pedal power. They were inspired by fellow youth climate activist Greta Thunberg, but also spurred by a sense of urgency after watching a grim documentary about the future of polar bears, which left Azalea particularly distraught.

“As a parent, I couldn’t hug her and tell her everything was going to be OK,” recalled Molly Morgan, Azalea and Ember’s mom. “When I promised Azalea we had to do something, I really meant it.”

But that journey to New York was just the beginning. Soon, the sisters were lobbying their local school board and legislators alike to adopt more environmentally friendly energy solutions here in New Hampshire, and teaming up with other youth activists in groups like 350.org. They also embarked on less formal efforts to convince their peers that these issues were worth taking seriously. After a classmate bet her $10 that climate change wasn’t real, Azalea asked her mom — a science educator — to visit her school and give a presentation on the subject, to settle the matter once and for all. Well, kind of.

But she and her sister are still making a difference. Last year, their efforts caught the attention of the team behind the iconic American Girl Doll franchise, who asked them to be part of a new book meant to inspire other budding environmentalists called “Love the Earth.”

“It has a lot of good information and ways you can help the environment,” Ember says of the new release.

And that opportunity, in turn, helped the sisters land perhaps their biggest moment in the spotlight yet: a spot on “Good Morning America,” where they helped to celebrate the debut of the newest American Girl, a 10-year-old named Kira who also cares deeply about the Earth. Their time on the show was brief, but Ember and Azalea used it to draw a connection between Kira’s work protecting koala bears and their own campaign to raise awareness about the climate’s impact on polar bears, aptly named “Kids Care 4 Polar Bears.” (The girls’ 12-year-old brother Linden, we should note, also provides “tech and research support.”)

With the help of their parents, the girls are working on establishing a membership program to support their $100,000 fundraising goal to help their school run on renewable energy by 2023. Those interested in supporting their efforts can chip in on their GoFundMe page and should keep an eye out for a forthcoming membership program.

In the meantime, the girls’ father, Tom Morgan, hopes the work they’ve already done can provide some hope to other families struggling to make sense of the gravity of the crisis facing our planet.

“I think for a lot of kids who are growing up today, they’re living with this. I don’t know if we want to call it a malaise or, you know, these deep feelings of sadness that there’s this thing happening that they will experience in their lifetimes that is going to be really destructive,” he says. “I think it’s really important to put action to those feelings.”

Whether through a bike ride, a climate strike at school, a batch of letters to public officials or otherwise, he says, “these simple and not so simple actions” can add up.

Or, as Ember puts it, “I think that other kids can just think about, be aware of what they’re doing, like the little things they can do — like turning off the lights, and not drinking with plastic straws and stuff — how that can have the really big impact on the Earth.”