They say it’s always the quiet ones. Ten years ago, Mengwei Zheng and his folks emigrated from China to the US. He attended Dartmouth on a full scholarship and then received his master’s from Northeastern. Now this soft-spoken, buttoned-down tax analyst with a grocery firm in Keene sports an improbable passion for throwing yo-yos. He practices daily and competes in large, freestyle tournaments. His routine leaves viewers awestruck and delighted. Discs fly, string vibrate and Zheng comes alive. 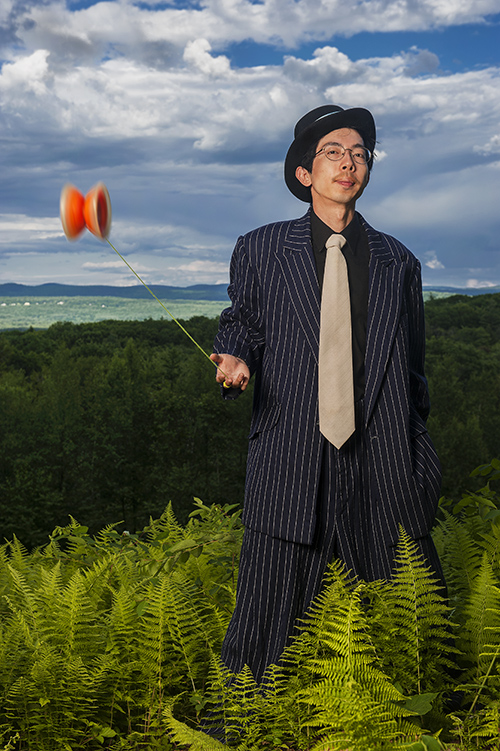 To see Zheng perform some astounding tricks, just go to YouTube and type in his name. To see some tricks up-close, or to test your own skills, drop by YoYo Heaven on Main Street in downtown Concord.  It’s owned and operated by the father-son team of Andy and Dan McBride (Dan pictured here) and stocks hundreds of yo-yos and other “skill toys.”

CREDITS: Outstanding photo assistance provided by John Moody despite one of the lights falling over. Wardrobe provided by the ever-beautiful Ann Carnaby of Tracy Theatre Originals. Location vista suggested by Sue Driscoll and provided by Megan Burke Kidder.