It seems logical, but could lead to some strange outcomes 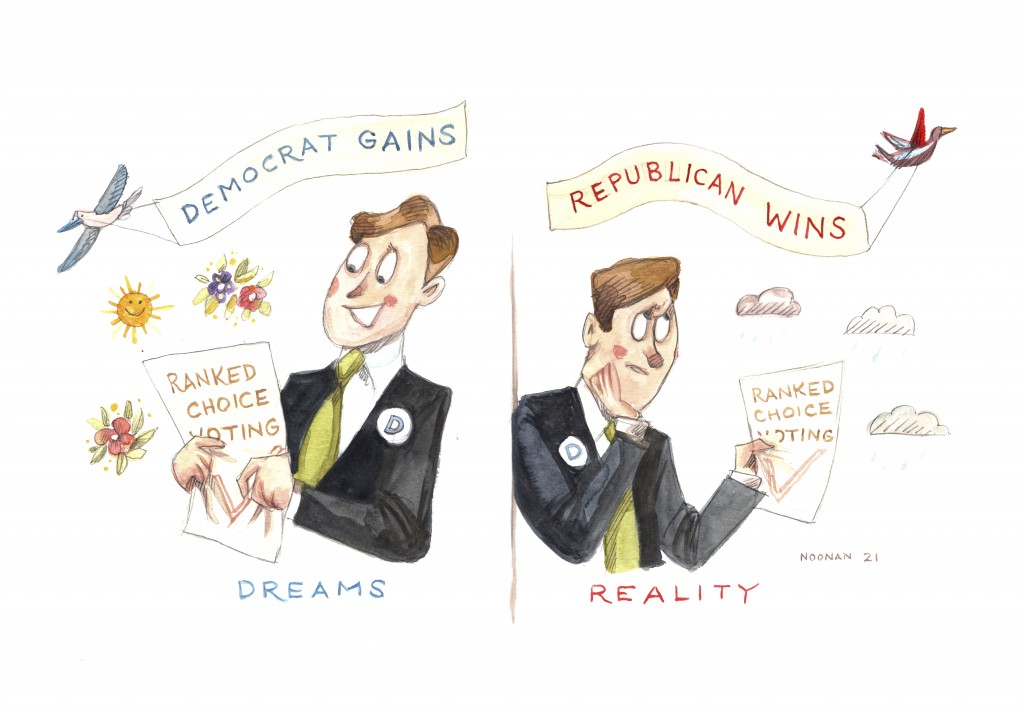 Ranked-choice voting is having a moment in America, although it has yet to catch on in New Hampshire. In an ironic twist, liberals are pushing it in the Granite State even though it could likely result in election doom for their side locally.

Today, election winners in New Hampshire are decided pretty much the way they have always been declared: The person with the most votes wins. It’s logical enough, but it can create some odd circumstances.

For example, let’s say there was a Dover City Council race dominated by the discussion of whether to have a new dog park. It’s a popular idea among voters, and among the four candidates, three candidates support the dog park and one opposes.

Under current New Hampshire law, what could happen is the pro-dog park candidates split up their side of the vote and the single candidate who opposes the park wins with less than a majority of support. The person elected doesn’t represent what voters wanted, and everyone knows it.

In theory, under ranked-choice voting, this wouldn’t happen. Voters would rank their candidates in order of preference. Then, if one candidate doesn’t get 50% on the first round of counting, the candidate in last place is dropped and those voters’ second choice is reallocated until some-one achieves 50%. Pro-dog-park voters would likely rank their top three choices as the pro-dog park candidates, basically ensuring someone backing the park
eventually wins.

Over time, various groups have flirted with this idea, going back to the Progressive Era at the beginning of the 20th century. In more recent decades, it’s appeared in liberal enclaves like Cambridge, Massachusetts. But it was only discussed in academic settings until very recently. Now the idea is back in fashion.

Next door in Maine, ranked-choice voting is now the law for U.S. House, Senate and presidential elections. Burlington, Vermont, used it for the first time in its city elections this year as did New York City. Republicans are also using it for primary elections in Virginia and Utah. New Hampshire House Democrats used the method to pick their leader this year.

Over the years in New Hampshire, there have been a few votes on statewide bills that used this method, including two sponsored by State Representative Ellen Read, a Democrat from Newmarket and Bernie Sanders supporter. The cosponsors of these bills were all Democrats, and the bills never went anywhere. In New Hampshire, though, it is very clear who would win politically if these bills became law: Republicans.

Locally, the only party getting their votes split up are Republicans, which is due to routine third-party challenges by Libertarians, who often end up voting for the Republican Party. Nothing from the left has split the Democrats’ vote since a Green Party bid from Ralph Nader helped George W. Bush win the state’s presidential Electoral College over two decades ago.

However, in federal races Libertarians have been players on the debate stage and get about 2-5% support in any given race. Third-party conservative candidates are the reason why Kelly Ayotte narrowly lost to Maggie Hassan in the U.S. Senate race in 2016, and may be the reason Donald Trump narrowly lost to Hillary Clinton that year.

While not everyone who voted for a conservative third-party person in the U.S. Senate race that year would have picked Ayotte as their second choice, logic says enough would have to give her victory. And with Libertarians frequently having official status on the ballot, this continues to rankle Republicans to this day — particularly with so many close elections in a swing state.