Where to Eat at Hampton Beach

A boulevard of broken diets 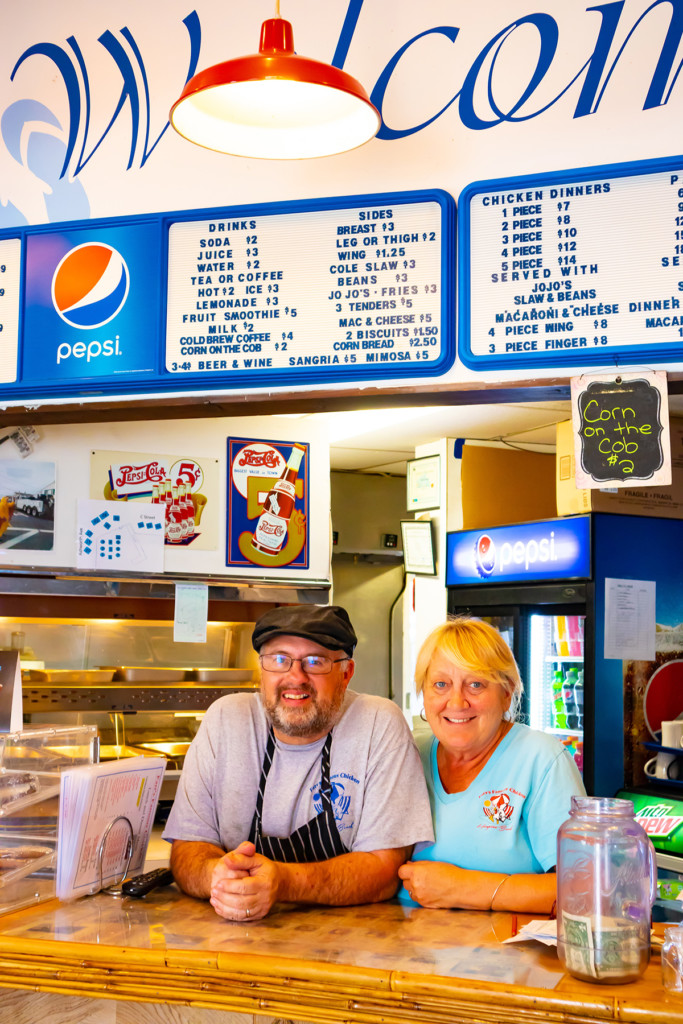 Our most popular stretch of ocean is a carnivore’s carnival. At Hampton Beach, there’s plenty of sand, honky-tonk action, a lively music scene and, surprisingly, good food. It’s really a family scene. Kids frolic in the surf, teenagers hit Playland Arcade, and everybody looks for something to eat. For many, it’s an annual escape, a tradition. What’s better than a hot afternoon strolling Ocean Boulevard with sand between your toes when hunger strikes?

But where to go? The real estate along the boardwalk is highly prized. Narrow shops are cheek by jowl for several blocks. A few massive fires in the past have allowed new buildings to divvy up oceanfront opportunity among newcomers, but many shops have been there for years, run by the same family, anchoring the food scene with a comforting sense of tradition.

Farr’s Famous Chicken, a block back on Ashworth Avenue, has been a mainstay there since the mid-’70s. Terry and Laurie Sullivan bought the shop from Henry Farr in the early ’80s, and used his recipes and equipment until Terry’s untimely death. The property was sold and went through several years of lackluster service until Laurie Sullivan suggested to Judy Conway, and her husband, Paul, that they buy the spot back and return to the roots of Farr’s Famous Chicken. That meant repurchasing the signature pressure fryers at $11,000 each to custom-serve the juicy-yet-crispy chicken.

A beloved tradition returned, and locals are once again flocking to the spot for a bucket of chicken, along with housemade coleslaw and baked beans made with the original recipes. New is a breakfast menu highlighted with a chicken and waffle option — yes, tradition can meet trend. 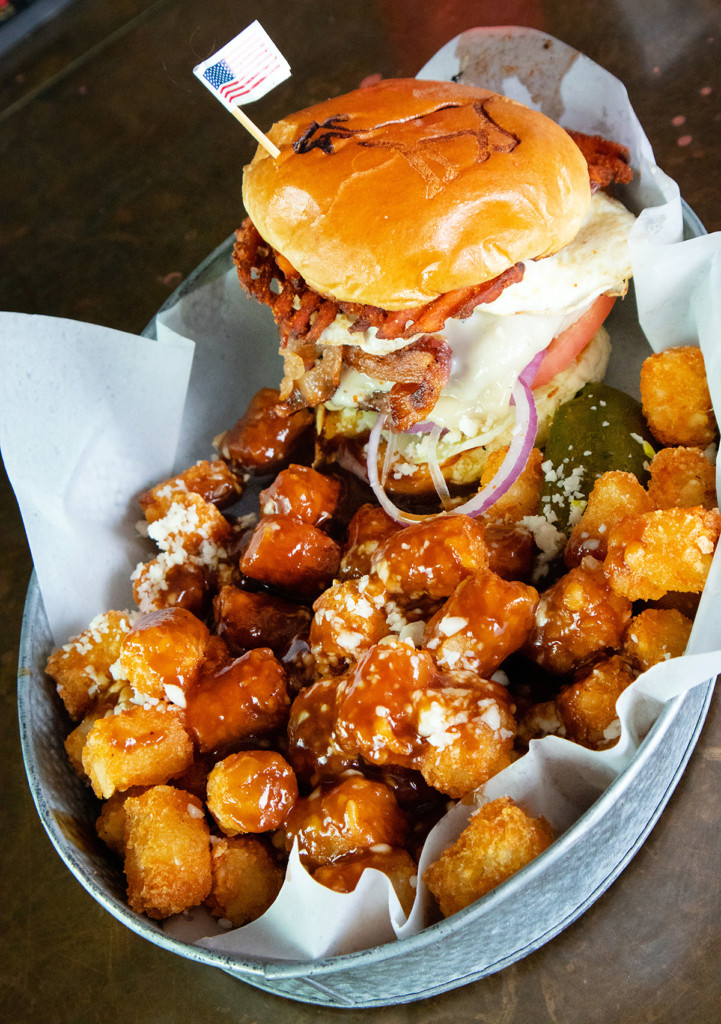 Farther south down Ashworth on the corner of L Street is The Goat Bar and Grill, a country-themed burger and whiskey bar. The business has only been here five years, but owners Al and Erica Fleury have already built a tradition to last. Old red barn boards cover the exterior, while two levels offer either a cozy bar and patio, or upstairs, with a separate entrance, outside dining with a deck (no beer on draft). The walls in both spots are covered with signed dollar bills, which makes for really clever wallpaper.

Decadent burgers are at the heart of the menu and, at $11, are a pretty good deal. Patties come in beef (pink or no pink), grilled or fried chicken, or a veggie, with countless add-on options, including a layer of mac and cheese, brisket, grilled pineapple or hearty slabs of bacon. Whew. An extensive whiskey list rounds out the menu. In season, they are open for lunch and dinner and breakfast/brunch on weekends. Fleury also owns nearby Wally’s and, to cover all bases, The Green Room on Ocean Boulevard offering smoothies and healthy bowls.

On the far southern end of Ocean Boulevard is Ocean Wok, a traditional Chinese food sit-down restaurant with its own parking lot. The spot has a small bar and expansive menu with many seafood offerings and Polynesian drinks. It’s worth the stop. While waiting, you can enjoy the signed photo of Michael Western, played by Jeffrey Donovan, from the “Burn Notice” series.

Back on Ocean Boulevard, the Sea Ketch Restaurant has been at the center of the action for 48 years, according to their flashing sign. Now, three levels of dining with spectacular views beckon beachgoers all summer for breakfast, lunch and dinner. At street level, enjoy sandwiches, and on the second deck, find a more traditional menu with lobster and fresh seafood dinners. On the third, enjoy an expansive view and fried seafood and lobster rolls at umbrella tables or in the shade at the outdoor bar. There is even another level above with a small bar facing out to the salt marsh and the Seabrook reactor for dramatic views at sunset. 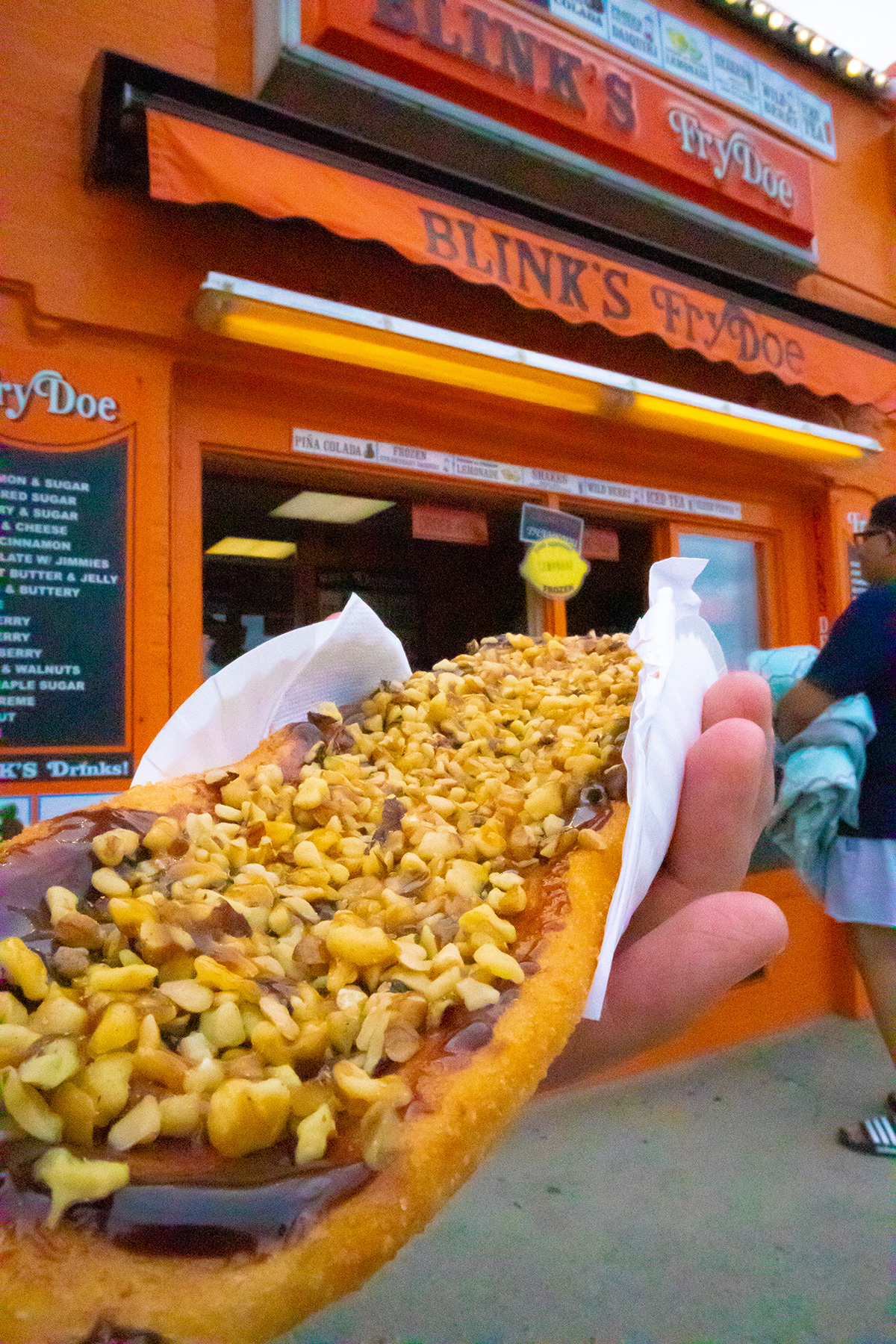 The Turtle fry doe with walnuts and chocolate sauce at Blink’s Fry Doe.

For a snack on the run, you can’t beat the iconic Blink’s Fry Doe (yes, that’s how it’s spelled). The bright orange building has been a beacon for guilty pleasures since 1973. And you can find more than the usual dusting of sugar and cinnamon. They offer a list that includes peanut butter and jelly, strawberry or coconut.

Next door is another institution, Big Steve’s Italian Sausage, with a window display better than Bergdorf Goodman’s — for a gourmand anyway. Find savory pizzas and calzones all behind the glass and ready to heat and eat. On a good day, this popular spot sells 400 pizzas. The spinach calzone is in a class of its own, but the BBQ chicken and the meatball pizza are staff favorites. And, of course, the sausages with onions and peppers are classic.

The area at 274 Ocean Blvd. was the site of a major fire in 2010. The new buildout offers a covered sidewalk — a welcome addition — and several retail spots, including Loopie’s Boardwalk Munchies, opened last year by newcomers Willie and Tara Laboy, hopefully starting a new family tradition at the beach. They offer a bit of everything, including sandwiches, fries and smoothies, but their wheelhouse is authentic empanadas.

For fine dining, look to Ron’s Landing, a bit north on Ocean Boulevard. It’s named after Ron Boucher of Chez Boucher on Route 1 in Hampton. His brother Bob now runs the place, offering seafood and more with white tablecloth dining and views of the ocean. It’s a relaxed atmosphere with a bar on the second level. But hello, Bob, maybe it’s a tradition, but orchids on a plate are so yesterday.

Farther up in Rye, The Carriage House carries on with the new owners, the team behind Louie’s in Portsmouth, which was closed due to smoke damage.

Unfortunately, this new outlet was also closed because of water damage this winter, but should be open for the coming season with fresh paint and the great food and hospitality they are known for.

Yes, it is a bit of a carnival on Ocean Boulevard. The food is oriented toward fun and family — run by families providing popular staples for vacationers taking time off from a diet regimen. These homegrown restaurants have stood the test of time and tide. That’s the beauty of the beach food scene. Nary a chain restaurant in sight. In a sense, it’s very local dining. No calorie counts needed or wanted on these menus. 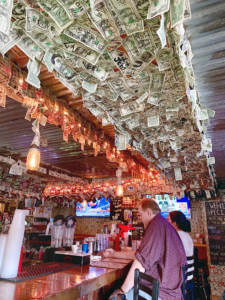 The “wallpaper” at The Goat Bar and Grill.

The Goat Bar and Grill
20 L St.
goatnh.com
Opens at 3 p.m., breakfast/brunch served on weekends
They have another location at 142 Congress St., Portsmouth.

Also worth a visit