What’s the Buzz on Caffeine?

The latest on whether caffeine is good for you, and how to boost energy without it 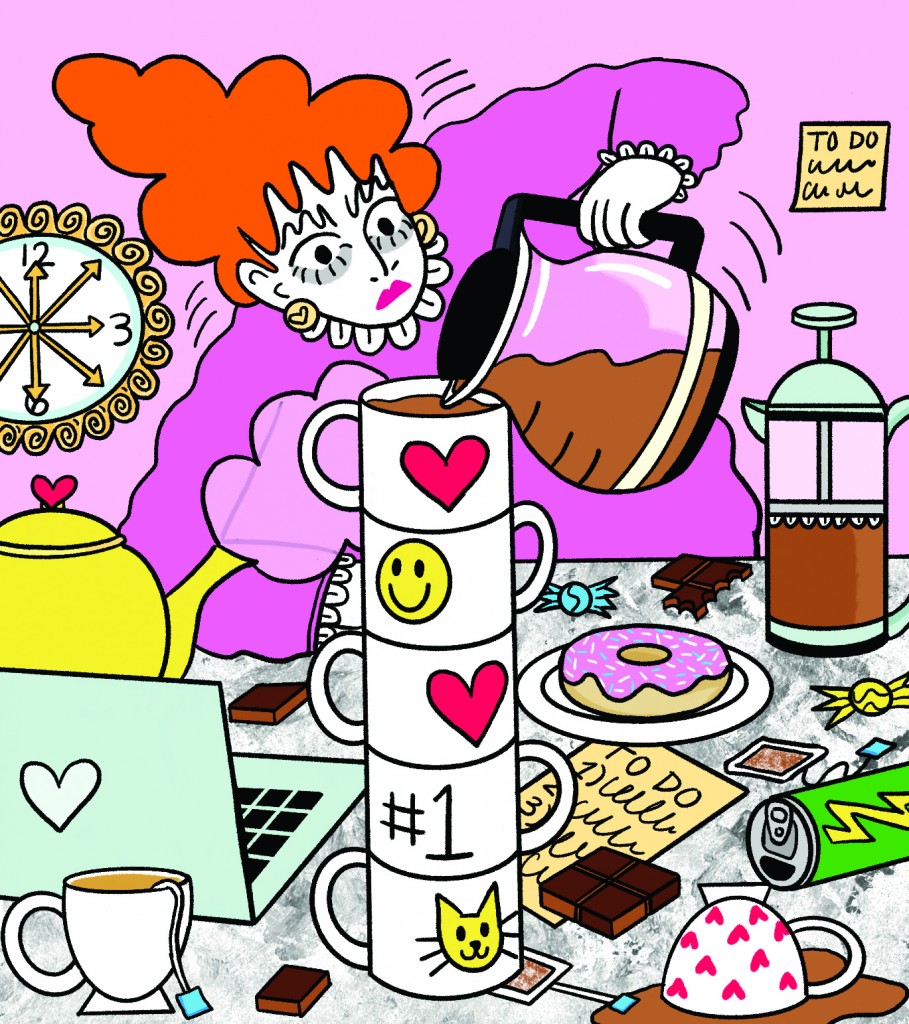 Are the grandest of grandes not enough for you? Whether you rely on caffeine to get through the day or just enjoy a little lift from one cup of morning joe, it’s good to know how your coffee habit affects your health.

Coffee has gotten a bad rap in the past, but recent research has linked coffee consumption with health benefits such as a lower likelihood of Alzheimer’s disease, Parkinson’s disease, heart disease, type 2 diabetes and certain cancers.

But too much of a good thing — well, you know how that usually goes. People’s sensitivity to caffeine varies widely, as does the amount of caffeine in different types of coffee, tea, energy drinks, soda and food (such as chocolate), but for most healthy adults, consuming up to 400 milligrams per day, or generally about four cups of coffee, appears to be safe.

Taking in excessive caffeine can cause blood pressure to go “through the roof,” says Sara Shipley, A.P.R.N., a nurse practitioner at St. Joseph Hospital in Nashua, who notes that she’s seen the effects of caffeine overload in her teenaged patients who are fond of energy drinks. In addition to elevating heart rate and blood pressure, caffeine can induce jitters, exacerbate anxiety disorders and cause insomnia.

To avoid feeling fatigued in the first place and needing to reach for coffee, “first and foremost, get enough sleep,” says Gabrielle Phaneuf, D.O, a primary care physician at Core Physicians Primary Care in Epping. The average adult needs seven to nine hours, but when it comes to sleep, quality, not just quantity, counts, so practice what’s known as good sleep hygiene: Limit caffeine, especially late in the day. Don’t eat for two hours before going to bed and follow an established pre-bed routine that includes reading a chapter of a book, meditating, or doing something else that you find relaxing that signals “bedtime” to your brain.

Note that while television might help you unwind, it’s best to steer clear of electronic screens — including televisions, phones, and computers — for an hour or two before you turn in. Looking at screens stimulates the brain, Phaneuf says, making it difficult to fall asleep soon afterward.

Also avoid alcohol as bedtime approaches. Although a nightcap might relax you and help you to drift off to sleep, it can interfere with later stages of sleep, making sleep less restful overall.

Keep your bedroom off limits for activities other than sleep. During the pandemic, many people created makeshift offices wherever they could find space in their homes, and for some, that meant setting up shop in their bedroom. Ideally, though, “keep your bedroom just for sleep,” Phaneuf says, “not for work or a hobby, so that your brain recognizes that as a sleep area.”

And don’t overlook your diet, which can affect how energetic you feel. Sugary foods can provide a brief burst of energy that soon crashes. In contrast, complex carbohydrates like fruits and vegetables take longer to digest and help sustain energy. Lean proteins such as fish, chicken, beans and lentils also “provide longer-lasting energy,” Phaneuf says, so ditch the donuts, give Cap’n Crunch the heave-ho, and begin each day with a breakfast that includes healthful protein, followed by energy-enhancing foods for lunch, snacks and dinner.

Also stay hydrated to get a leg up on energy, Shipley says. “Adequate water intake can definitely affect your cognitive function and your physical function, and how you feel in general,” she says. Aim for 1/2-1 ounce of water per pound of body weight. Someone who weighs 150 pounds, for example, should consume 75-150 ounces of water per day.

Lastly, stay active, which improves energy and aids restorative sleep. “Staying active is very good for energy,” Phaneuf says. “The more active you are, the more exercise you get on a regular basis, the better you’ll sleep and the more energy you’re going to have during the day.”

Don’t work out too close to bedtime though. A relaxing walk or light bike ride after dinner is fine, Phaneuf says, but the boost in vigor that strenuous activity provides, if it comes late in the day, can make it difficult to fall asleep.

Although moderate consumption of caffeine can provide some health benefits, people’s sensitivity to it varies, and for some, a little goes a long way.

“Caffeine is a stimulant,” says Gabrielle Phaneuf, D.O., a primary care physician at Core Physicians Primary Care in Epping. It can increase energy, athletic performance, and brain function, but because it’s a stimulant, it makes everything go faster, she says — including your heart rate. While one cup of coffee shouldn’t pose a problem in most healthy adults, too much caffeine can trigger abnormal heart rhythms in people who are prone to them and can cause side effects such as anxiety and unpleasant jitters in anyone.

Indeed, “moderation is crucial,” Phaneuf says. “Too much caffeine is not a good thing, so don’t exceed the [recommended] 400-milligram limit if you can avoid it.”

To be your most energetic and healthy self, Phaneuf advises, limit your caffeine intake, eat a nutritious diet, stay active, and make restful sleep a priority.

Sidelined by an ACL Injury?

Foam rolling has taken off among exercisers. Should you try it?