What Are Great Piddocks?

A local oceanic mystery in need of solving 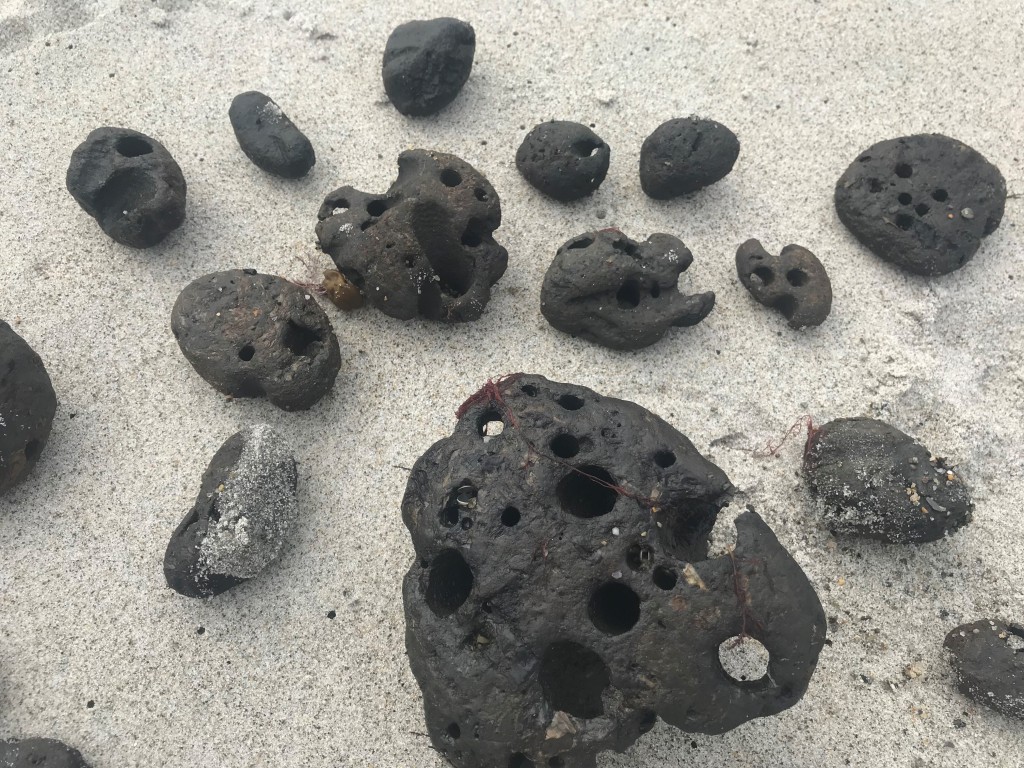 Are these mysterious ocean objects metal? Stone? Synthetic or natural? Marshall Hudson is on the case. Courtesy photo

The mystery started with a simple walk on the beach. The tide had gone out and left behind all the drifting goodies that wash ashore with a stormy high tide. Suzanne “Suzie” Graham was vacationing at Plaice Cove in Hampton, and was walking the beach collecting shells when she started noticing some peculiar objects. Graham has a knack for finding unique things — she once found an unusual rock that turned out to be a 30,000-year-old caveman hammer-stone. She didn’t know what these Plaice Cove mystery objects were, but their hardness and sheen made her think they were metallic. Many of them were similar in size and shape, suggesting they might be machine-made in a factory somewhere.

The mystery items were dark in color and roughly the size and shape of a good homemade cookie, but with holes in them that gave them a Swiss cheese look. Graham decided she needed to find out what these mysterious objects were, and why they were suddenly washing up on the beach. She collected some samples, sealed them in plastic baggies, and set out to solve the mystery. Showing the samples to friends and local Seacoast residents yielded no answers, so she took pictures of her mystery whatzits and sent them off to area science centers. She never got a response.

While reading an article in New Hampshire Magazine about the drowned forests at Odiorne Point and Jenness Beach state parks, Graham wondered if her mystery widgets might be petrified remains from the drowned forests, so she sent her photos and an inquiring note to the editorial staff at New Hampshire Magazine. The novel coronavirus shutdown made it a challenge, but I coordinated a meeting with her to examine and obtain samples of her mystery objects. Casual observers of our meeting might have thought they were witnessing a drug deal going down, as two masked strangers met briefly in a deserted parking lot behind an empty building at an on/off ramp to exchange mysterious substances in plastic baggies.

Looking closely at the objects, I noticed layers or lines that resembled woodgrain or growth rings on a freshly cut tree stump. Could the mystery items be from sunken logs or wood from an old shipwreck? I put one inside a woodstove and tried to light it on fire. It would not burn. I dropped one into a bucket of water to see if it would float. Sank like a rock. I ruled out anything to do with wood.

Back in 2011, 4 million plastic disks were accidentally discharged from a wastewater sewage treatment plant and ended up washing up on area ocean beaches. The disks provide surface area for bacteria to cling to while breaking down the sewage, and are not supposed to be released from the sewage treatment plant, but it had happened. Could our mystery items be designed to serve the same purpose as the wastewater treatment disks, but be made of a more natural material than plastic? I contacted a friend who works for the state overseeing sewage treatment facilities, and was happy to learn that the mystery doodads I had been handling without gloves had nothing to do with sewage. 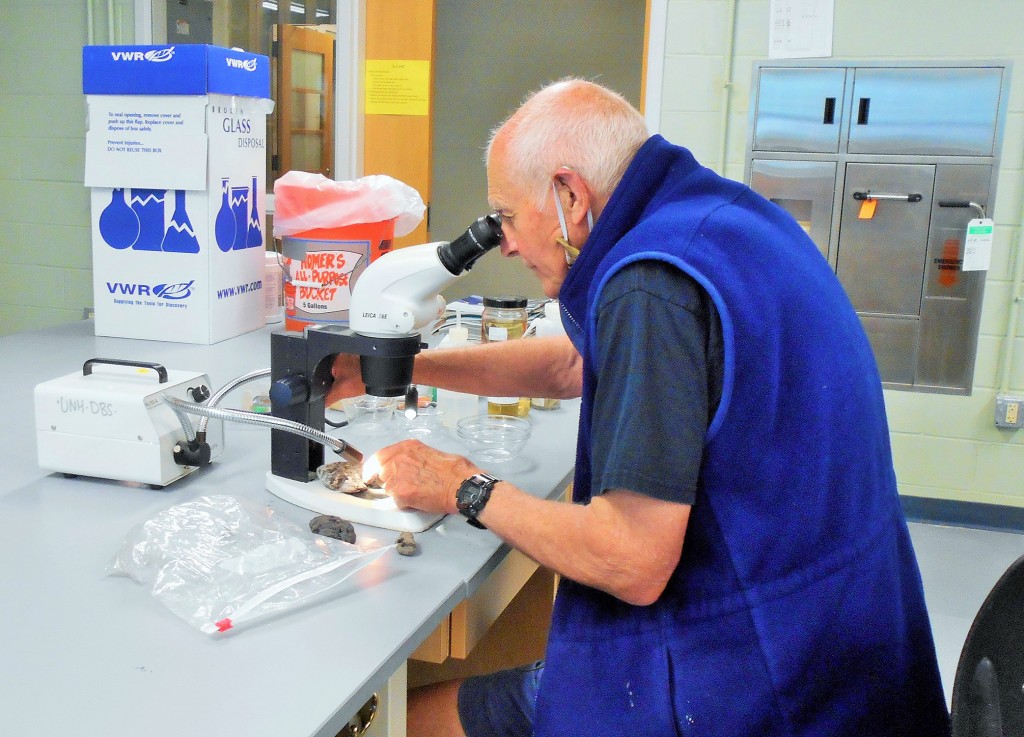 I queried a professional geologist, and then other professionals in the coastal environmental world, and struck out again and again, but these contacts forwarded my photos and questions to their contacts, and those contacts forwarded it on to others. Eventually it ended up in the in-box of professor Larry Harris from UNH. Harris thought he knew what the black cheese cookie things in my photos were, but he wanted to examine a sample. Harris teaches marine biology and has a Ph.D. in invertebrate zoology, which means he enjoys studying slimy ocean critters lacking a backbone. Harris had been teaching at UNH since 1969, and after 51 years, he decided to retire in May of 2020. Graham and I caught up with him as he was packing up and clearing out his office/laboratory.

Harris has studied ocean life not only at UNH, but all over the world, including the South Pole. Harris spent a year at McMurdo station in Antarctica studying algae frozen in the ice. He told us that although the algae might have been frozen for thousands of years, when thawed it comes back to life, just as though it had laid down for a quick nap. Harris looked at our samples under a microscope and observed that the holes were funnel-shaped, and became increasingly larger in diameter as they got deeper into the material. “Clams” he said. Not just any old clam, a boring clam named Zirfaea crispata, more commonly called Great Piddock. The holes are the home of the Great Piddock, which burrows into the sea bottom and anchors there, pumping water in and out and filtering it to obtain the food and nutrients it needs. The holes are shaped like inverted funnels because the clam grows bigger and fatter over time as it burrows deeper.

Our mystery item turned out to be over a thousand years old. It is saltwater marsh peat that had regularly accumulated new layers of silt and organic matter, which created the “growth rings” appearance that I had noticed. A Great Piddock colony had taken up residency and bored holes into the peat when it was still soft. Changes in sea levels and many years of accumulated silt and organic matter compressed and buried the sample deep enough that sunlight and oxygen no longer reached it. The anerobic environment turned the sample black, and the Great Piddocks died or moved on.

When moisture no longer reached the peat, it dried up and cracked into pieces, where it remained until some dredging operation disturbed it. The disturbed pieces then rolled around in the surf, which rounded off any sharp edges, and sorted them by size or weight as bigger ones sank and the lighter ones rolled on. A rowdy high tide spit them out, allowing Graham to find them while walking on the beach, which in turn led to a marine biology lesson in Great Piddocks from a South Pole scientist. Not a simple mystery, but we solved it.