Don’t call it a sunken forest because the forest didn’t sink, it was drowned by time and tides 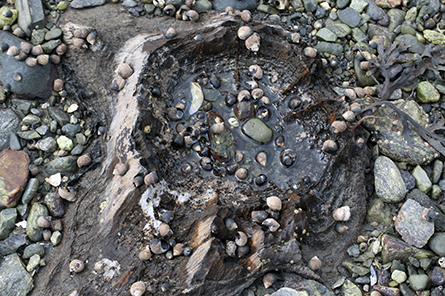 If you go to Odiorne Point at low tide, you’ll see it — an ancient forest, or at least remnants of it, peering from beneath the sand and stone. The trees, mostly cedar and pine, are now just stubs and bits, worn down by thousands of years of waves.

“The trees provide a window into the geological history of the Seacoast,” says UNH geology professor Will Clyde.  “Their position in the ocean shows how sea levels can change as the climate changes, causing coastlines to move.”

Over the millennia, New Hampshire’s coastline has moved from as far inland as the Lee traffic circle, just west of Durham, and as far out into the ocean as the Isles of Shoals. Then, the sea level rose again and the coastline shifted to (approximately) where it is today. (See the story below for details.)

Carbon dating shows the trees are between 3,500 and 4,500 years “Before Present,” as geologists say. “The sea level [at that time] had started to rise past the current position of the ‘drowned forest,’ causing them to become buried and preserved by sediment.”

A study of the growth rings of the stumps — which measure from eight to 10 feet in circumference — indicates the trees were more than 100 years old when they were killed by the advance of the sea. Clyde says the forest would have been the same kind of coastal marsh forest that exists on land at Odiorne Point today.

A historical marker near Jenness State Beach  says that, intermingled with the remnants of the drowned forest there, are the  last  few yards of the original America-to-Europe telegraph cable, laid in 1874. 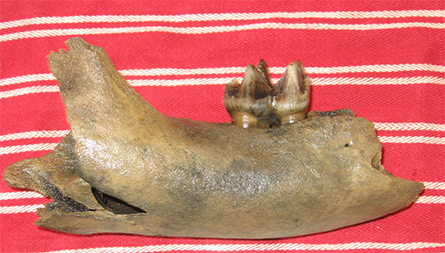 What you see in the photo above is a partial lower jaw of a mastodon, probably 11,000 or so years old. It was found among a netful of scallops and rocks pulled out of the waters near Rye Harbor two years ago. Mike Anderson, a fisherman from Rye, was captain of the boat that hauled it in.

“We pick through the scallop shells and throw a few rocks over and stuff, and we ended up finding that tooth,” he told WMUR after it happened. “If you ever had a tooth extracted, you could see where the nerve ending came off. There was a hole in it.”

So why was the tooth of a mastodon — a land animal, a relative of the elephant — deep in the ocean?

Will Clyde, a UNH geology professor, says it wasn’t ocean back then, that the mastodon would have been walking on land, partly forested, that extended all the way out to the Isles of Shoals.

Clyde says the coastline changed so significantly because the Pleistocene ice sheet that had long covered what is now New Hampshire began to retreat about 20,000 years ago and the ground that had been pushed down by its weight (pushed down so much the coastline was then at the Lee traffic circle) began to rebound.

“By about 9,000 years ago, local sea level had lowered due to isostatic rebound [so] that the coastline was at the Isles of Shoals,” says Clyde.

Then the process shifted, and the global sea level rose and the coastline started to move inland again.

Clyde says the mastodon tooth is just one of many artifacts of land animals from long ago that have been found in the waters off the (likely to change again, thanks to melting glaciers) coast.

The History, Legends and Progress of Manchester's Urban Ponds