This local attraction icon is open all year long, but Christmastime is when the park really shines. Literally - over 400,000 Christmas lights really set the holiday mood! 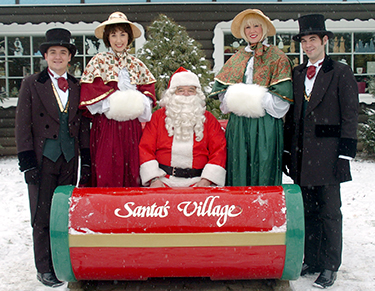 North Pole, North Country — seems easy to see why Santa’s Village is located in Jefferson. That’s partly true. In the early ’50s, park founders Normand and Cecile Dubois wanted to do something unique in the region. When Normand saw a deer cross the road, the idea was born that Santa and his reindeer could very well call the North Country home.

The park opened on Father’s Day in 1953 and originally offered pony rides, a show featuring Francis the Famous Mule and Santa Claus, who was accompanied by reindeer and elves. By the late ’60s, the amusement park also included playgrounds, restaurants and more attractions. In 1974 Normand and Cecile retired, handing the park over to son-in-law Michael Gaynor.

Over time the park grew to what we know today — filled with rides like the Chimney Drop, bumper cars, Yule Log Flume and many more modern attractions. You can visit all year long, but Christmastime — with its 400,000 Christmas lights and a slate of festivities — is perhaps the best time to make the trip.

Bundle up and head to Jefferson for some holiday fun including rides, visits with Santa, shopping and more. Tickets can be purchased here.

Here are a few things you can look forward to while visiting Santa’s Village during Christmastime:

Popping With the Sounds of Holiday Cheer

Finding the Spirit of Christmas on Stage