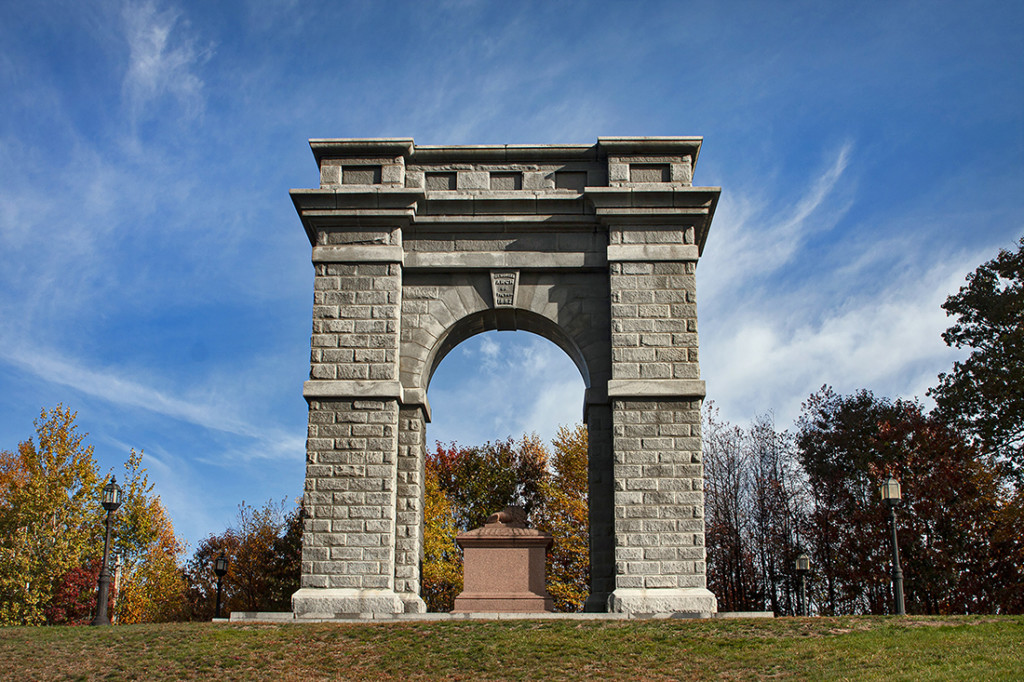 The 1881 Tilton Arch is a replica of Rome’s Arch of Titus. Photo by Stillman Rogers

Tilton’s story is inexorably linked with its namesake family. The earliest settlement, called Sanbornton Bridge, centered around the bridge built across the Winnipesaukee River in 1762. West of the bridge, a sawmill and gristmill were built, and one of the original settlers, Nathaniel Tilton, established an iron foundry and later a hotel.

The first store opened in 1789, between the bridge and the mill, a route that soon became the Main Street. It wasn’t until 1869 that Sanbornton Bridge separated from the town of Sanbornton and incorporated as Tilton in honor of Nathaniel Tilton. This was proposed by his descendant and textile mill owner Charles E. Tilton, the town’s wealthiest resident. A decade later, he built the handsome town hall as a gift, but on the condition that the town’s name would always remain the same.

Charles Tilton had made his fortune in the West, supplying goods to miners during the California gold rush and later in real estate, banking and railroads. When he returned to his hometown a millionaire, he built a Second Empire mansion on the hill overlooking Main Street. The mansion, almost unchanged, is now part of Tilton School, housing the library. The attached carriage house is the art center.

Charles Tilton’s story is told on the NH Historical Marker near Island Park, also a gift from Tilton. Reach the park and its gazebo, where free band concerts are held at 6:30 p.m. on Sundays in July and August, via an iron bridge. Tilton donated the bridge in 1881, and because of its innovative truss design, it’s on the National Register of Historic Places.

So are several other of Tilton’s gifts to the town, most noticeable of which is the Tilton Arch. On a trip to Rome in 1881, Tilton was inspired by the Arch of Titus and returned home to build a replica on the hilltop opposite his mansion. The arch is 55 feet tall, made of rusticated Concord granite, and stands on the site of a fort used by the Pemigewassets. At its base is a stone sarcophagus and red granite lion. A park with picnic tables surrounds the arch.

The hill it stands on is actually in the town of Northfield, the river being the town line. Tilton had intended this arch to be his mausoleum, expecting that Northfield would merge as a part of Tilton, since the settled area spreads between the two and many public buildings are shared. But Northfield didn’t want to be part of Tilton, and Charles was determined to be buried in the town that bore his family’s name, so he built another mausoleum for himself in Tilton’s Park Cemetery.

The arch, park, bridge and the elegant brick buildings bordering Main Street were not Tilton’s only efforts to beautify his hometown. He commissioned statues that were placed around the town center, four of which remain today. At the intersection of Main and Summer Street is a marble Native American princess representing America, one of four depicting the continents. Europe, represented by a woman atop a marble arch, stands at the western end of the business district (she used to be at the train station and is still known locally as Timetable Mable). Farther along Main Street, at the high school, is Asia with a lion beside her. The Wampanoag Chief Squantum stands on Main Street at the end of the Tilton Block.

Most buildings Tilton would have seen along Main Street at the end of the 19th century are still there, and a total of 13 are listed on the National Register. Several on the north side were built by Tilton, including the block at 277 Main St., with some of the region’s most elaborate Victorian ornamentation. On the south side, the Bryant and Lawrence Store looks much as it did in the mid-1800s, when Main Street was still a dirt lane. Its third-generation owner, Bill Lawrence Jr., carries everything from sandpaper to faucets (which he can tell you how to install) in the vanishing tradition of a local hardware store.

It’s hard to miss the Gemini Health Emporium next door — with its bright yellow and blue exterior, it’s not a shrinking violet. Inside are spices, herbs, health foods and bulk grains, as well as local eggs. Along with these two longtime community-oriented stores are a couple of restaurants that have been part of the Main Street fabric for decades. Pauli’s Bakery and Restaurant serves breakfast and lunch; weekend breakfasts of eggs Benedict or blueberry pancakes are a local tradition.

On the other side of the street, past the Gothic Revival Trinity Episcopal Church (another on the National Register) is Tilton House of Pizza. Known as T-HOP, it’s an informal community center where local school teams go to celebrate. There’s never been a shortage of places to eat in Tilton, but several new kids on the block have added to the choices. 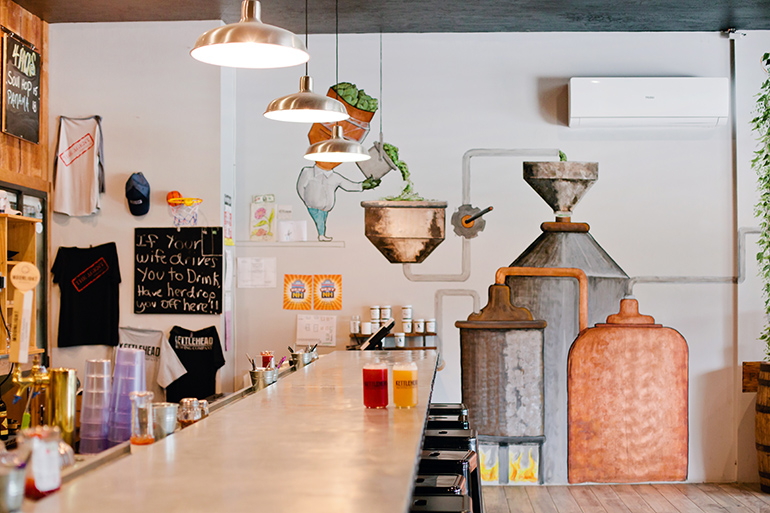 Grab a bite to eat and try one of the 11 beers on tap at Kettlehead Brewing Company. Photo by Jenn Bakos

V’s Sandwich specializes in bánh mì, delectable Vietnamese sandwiches layered with meats and pickled vegetables on a baguette. V’s blends their own chai, and the variety of fruit bubble teas is staggering. Across the street, Casamigos serves authentic Mexican dishes in a bright, cheery atmosphere. Near the high school, Kettlehead Brewing Company is getting rave reviews for its 11 on-draft pours and a menu of housemade burgers, pizzas, hearty sandwiches and other bar favorites with a fresh approach.

If you’d like to spend some time admiring all the architecture in Tilton’s Historic District and sample some of its new dining options, the Black Swan Inn is on West Main Street. On three riverside acres with lovely gardens, the 1880s house features stained glass window panels and antique furnishings in a restrained Victorian style.