The beginnings of a family tradition 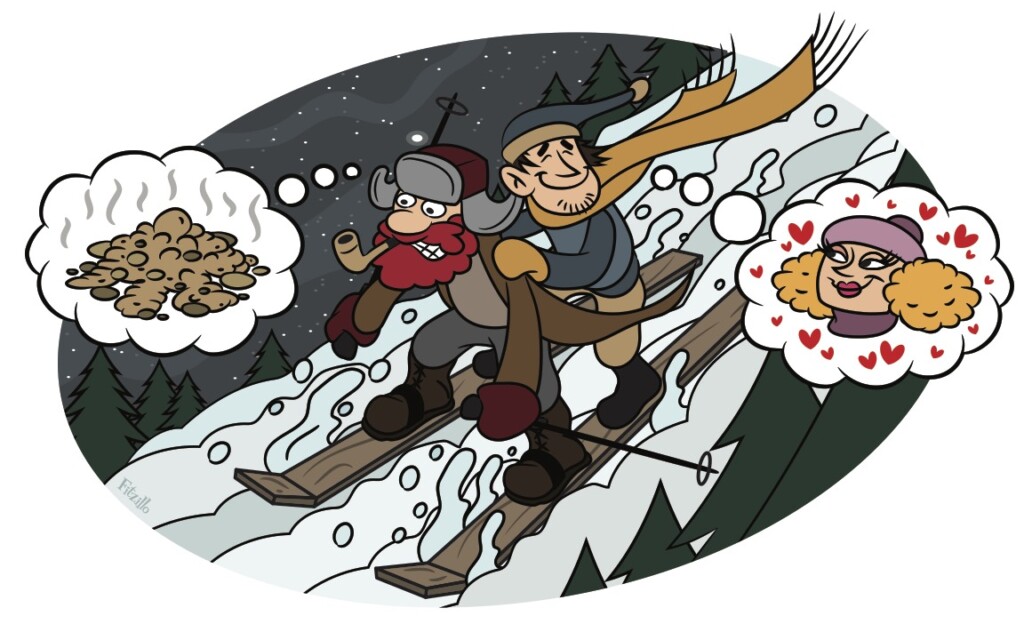 Like most New Hampshire kids, I skied. Have mountains, will ski. My aunt and uncle, who loved skiing, paid for equipment, tickets and lessons. The boots were huge and clunky with stiff metal buckles. I wore Auntie’s hand-me-down stirrup pants, puffy parka and rabbit-fur hat with pom-pom ties without protest. I mastered the intricacies of the rope tow and T-bar, and even figured out how to exit the chairlift without incident and push myself upright using my poles after a fall. From the basic snowplow, I advanced to the stem christie, a technique that allowed me to traverse the slope — slowly and in terror — rather than bomb straight down like my little brat brother and his daredevil friends.

For two or three excruciating seasons, I tried to enjoy skiing — I really did — but my favorite part was hiding out in the lodge, reading and drinking cocoa. For a school assignment, I wrote about my adventures — in cursive, on white lined paper. Two i’s in a row looked weird, so my essay, entitled Sking, began: I went sking at Ragged Mountain. It was wicked cold. My feet froze. I fell a bunch. Sking is not all it’s cracked up to be. And so on, for two pages.

My teacher circled every sking in red; there were many — the paper bled.

Which reminds me of a family story …

Back when horses were more common than cars and roads rolled rather than plowed, Bob wrangled an invitation to a card party at a remote farmhouse on a backcountry hill. He admired Lillian, the daughter of the house, and hoped to impress her and her Yankee relatives. He snowshoed in and behaved admirably. So far so good. After the party, Lillian’s brother, Lawrence, asked Bob to join him in a night-ski to the village. Other guests had descended earlier by sleigh and Lawrence needed to fetch back the rig and horses. Bob, of course, accepted the challenge.

“Only problem,” Lawrence said, “we got just the one set of skis.”

As the family watched from the porch, Lawrence lit his pipe, strapped his honking big feet to the 8-foot wooden slats and told Bob to step on behind him and hold on tight.

What luck! The skis fit perfectly into a pair of ruts — about two feet apart — iced into the snow by the comings and goings of the sleighs and sledges. “We won’t even have to steer!” Lawrence said. “We’ll ride these ruts the whole way.”

The slope was gradual, the moon bright, the night air exhilarating. The smoke from Lawrence’s pipe wafted. At about the halfway point, they started picking up speed, but having negotiated a tricky curve with grace, the two young men felt confident — even cocky.

Until they got to the real steep part.

Bob — peering over Lawrence’s shoulder — spotted something in the distance that alarmed him. A dark mound appeared to fill one of the ruts. Lawrence also spotted the large, frozen horse flap and said, teeth clenched on the stem of his pipe, “Bob, we are going to have to lift our left feet.”

They lifted their left feet.

And fell. Spectacularly. Ass over teakettle. The skis kept going. Bob and Lawrence landed in a heap. The pipe went flying and was lost.

But no bones broke. Bob proved to be a good sport and earned the family’s respect.

The following spring, Lawrence’s mother found the pipe while picking wild strawberries. Shortly thereafter, Bob and Lillian married. They had four children and nine grandchildren, including me. A skier! Cross-country, that is. The flatter the better