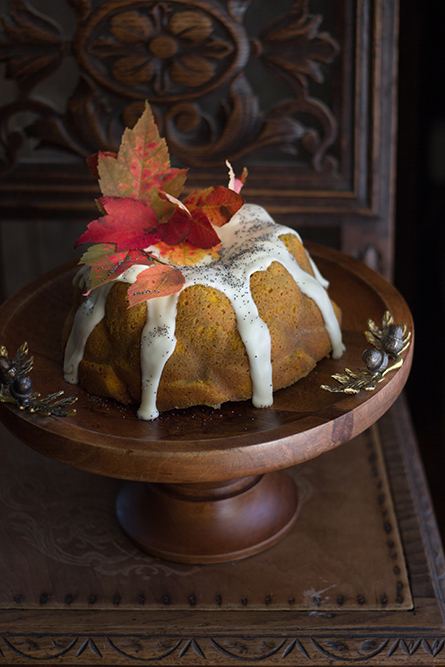 To celebrate her move to Warner, New Hampshire, author and photographer Sarah Kenney threw a fall feast for the ages last year during the town’s annual Fall Foliage Festival. Here, she presents three of the recipes used for her dinner party so that you too can celebrate the season using the state’s abundant autumn harvest.

Bake for 35 to 40 minutes or until wooden pick inserted in cake comes out clean. Cool in pan on wire rack for 10 minutes; remove to wire rack to cool completely. Drizzle with glaze.

Or use one can of cream cheese frosting, gently warmed and drizzled on top of cake. 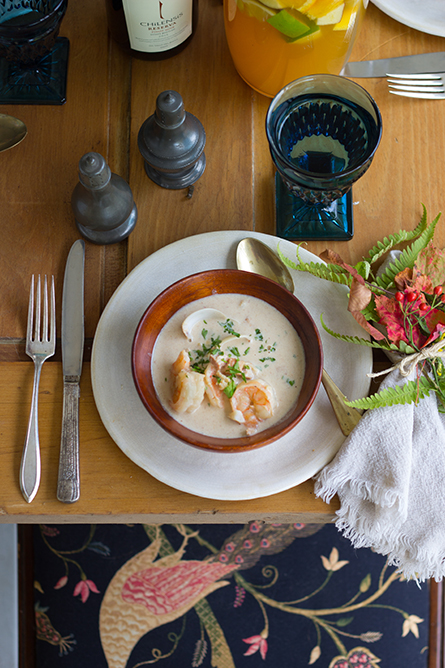 Combine salt pork and 1/4 cup water in a heavy-bottomed stockpot or Dutch oven. Heat on medium, stirring occasionally, until water has evaporated and pork has begun to brown and crisp in spots, about 8 minutes. Add butter, onion and celery. Continue to cook, stirring occasionally, until onions are softened but not browned, about 4 minutes longer. Add clam juice and stir to combine.

Add clams and increase heat to high. Cover and cook, until clams begin to open, about 3 minutes. As clams open, remove them with tongs and transfer to a large bowl, keeping as many juices in the pot as possible and keeping the lid shut as much as possible. After 8 minutes, discard any clams that have not yet begun to open.

Add milk, potatoes, bay leaves, and a pinch of salt and pepper to the pot. Bring to a boil, reduce to a bare simmer and cook, stirring occasionally, until potatoes are tender and starting to break down, about 15 minutes.

Transfer liquid to a blender and blend on high speed until smooth and emulsified, about 2 minutes. Return liquid and solids back to Dutch oven. Add heavy cream and stir to combine. Reheat until simmering. Season well with salt and pepper. Serve immediately with oyster crackers. 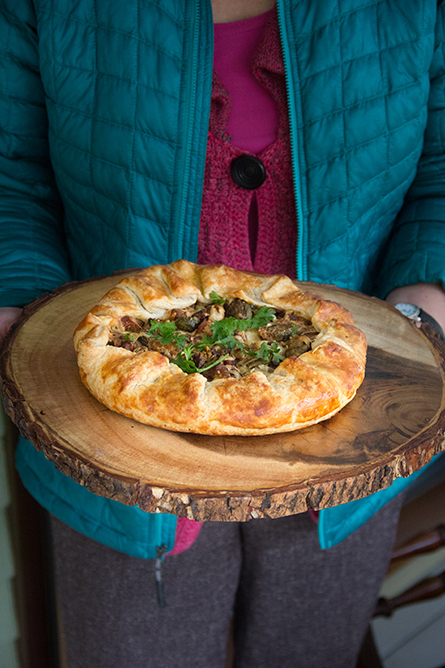 Mushroom and Leek Galette with Gorgonzola

Process flours, sugar, and salt in food processor until combined, 2 to 3 pulses. Add butter and pulse until it forms pea-sized pieces, about 10 pulses. Transfer mixture to medium bowl.

Sprinkle water and vinegar over mixture. With rubber spatula, use folding motion to mix until a loose, shaggy mass forms with some dry flour remaining (do not overwork). Transfer mixture to the center of a large sheet of plastic wrap, press gently into rough 4-inch square, and wrap tightly. Refrigerate for at least 45 minutes.

Transfer dough to lightly floured work surface. Roll into 11-by-8-inch rectangle with short side of rectangle parallel to edge of work surface. Using bench scraper, fold bottom third of dough up, then fold upper third down over it, folding like business letter into 8-by-4-inch rectangle. Turn dough 90 degrees counterclockwise. Roll out dough again into 11 by 8-inch rectangle and fold into thirds again. Turn dough 90 degrees counterclockwise and repeat rolling and folding into thirds. After last fold, fold dough in half to create 4-inch square. Press top of dough gently to seal. Wrap in plastic wrap and refrigerate for at least 45 minutes or up to 2 days.

Then, prepare the filling, combine and bake.

Cover mushrooms in bowl and microwave until just tender, 3 to 5 minutes. Transfer to colander to drain and return to bowl. Meanwhile, heat 1 tablespoon oil in 12-inch skillet over medium heat until shimmering. Add leeks and thyme, cover, and cook, stirring occasionally, until leeks are tender and beginning to brown, 5 to 7 minutes. Transfer to bowl with mushrooms. Stir in crème fraîche and mustard. Season with salt and pepper to taste. Set aside.

Adjust oven rack to lower middle position, place pizza stone on oven rack, and heat oven to 400 degrees. Remove dough from refrigerator and let stand at room temperature for 15 to 20 minutes. Roll out on generously floured (up to ¼ cup) work surface to 14-inch circle about 1/8 inch thick. (Trim edges as needed to form rough circle.) Transfer dough to parchment paper-lined rimmed baking sheet. With tip of paring knife, cut five ¼-inch circles in dough (one at center and four evenly spaced midway from center to edge of dough). Brush top of dough with 1 teaspoon oil.

Spread half of filling evenly over dough, leaving 2-inch border around edge. Sprinkle with half of Gorgonzola, cover with remaining filling, and top with remaining Gorgonzola. Drizzle remaining teaspoon oil over filling. Grasp 1 edge of dough and fold up outer 2 inches over filling. Repeat around circumference of tart, overlapping dough every 2 to 3 inches; gently pinch pleated dough to secure but do not press dough into filling. Brush dough with egg and sprinkle evenly with kosher salt.

Lower oven temperature to 375° F. Bake until crust is deep golden brown and filling is beginning to brown, 35 to 45 minutes. Cool tart on baking sheet on wire rack for 10 minutes.

To put it together

To put it together

Recipe: Make Your Own Cider Donuts