There He Is, Mr. Concord

A lighthearted pageant to raise money for a serious cause 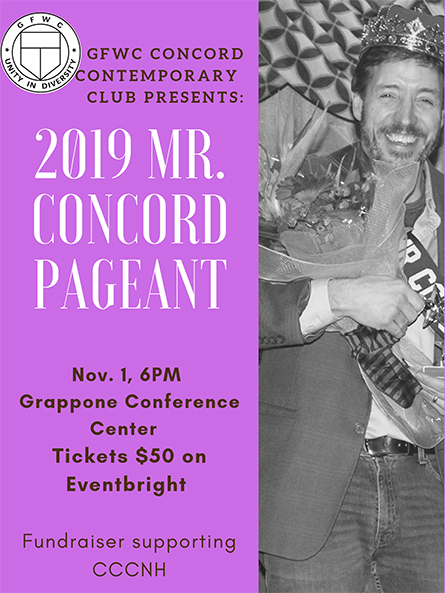 Mr. Concord is coming up on its fourth year of providing fun, lots of chuckles and most importantly, aid to the Crisis Center of Central New Hampshire in Concord. This year, the show will welcome back Adam Sexton from WMUR as emcee, with judges Jim Rosenburg, Terra Reardon and Christian Sulivan. The event consists of eight contestants who are recruited from the Concord community to flaunt their talents, showcase silent auction items and compete to become the next Mr. Concord.

The event mostly follows the familiar flow of a pageant: In round number one we learn a bit about the contestants, which is followed by the amusing (and incredible) talent section. As this is a benefit, things deviate a bit with a silent auction, and then the evening concludes with a series of questions on how the contestants will continue to raise awareness for domestic violence and help the Crisis Center. In addition, the evening features a DJ, cash bar, wine pull, and an opportunity for audience members to vote (for a small donation of $5) for their favorite talent.

This year, Michael Hauptly-Pierce, co-founder of Lithermans Limited Brewing and regular New Hampshire Magazine contributor, is in competition for the Mr. Concord crown. Mostly, he says, he’s looking forward to raising funds for the Crisis Center, though he’s also excited for his talent portion — singing — and “having people laugh at me.”

Contestants are usually sought out by Mary McGahan, the founder of the event. But, if you think you’ve got the talent to take the crown, there are forms on hand to sign up for next year’s competition.

“The night will be filled with lots of fun and laughter, good food and good community,” says McGahan. In years past, she recalls a multitude of different talents displayed by contestants. Anything from tap dancing, singing, serving food to the judges, an informational talk on beer and how to pour it correctly, and even a performance by all of the members of a bagpipe team (kilts and all). “There is no one in the room that isn’t cheering and having a blast,” she says.

During the performances and appearances from the contestants, expect to find yourself on a roller coaster of emotions, says McGahan, from laughing soundlessly to tear-filled eyes that sweep the room. The event is a fun way for the community to come together for a serious cause.

Get There
Mr. Concord, November 1
Grappone Conference Center
70 Constitution Ave., Concord
Starting at 6p.m.
Tickets are $50 and available on eventbrite.

McGahan, who is president of the GFWC Concord Contemporary Club, came up with the idea for the Mr. Concord pageant five years ago. The club is dedicated to performing community service work and promoting fellowship among women in the city.

“I was home with a torn meniscus, sitting in my chair when this wild idea came into my head,” says McGahan. “The idea sounded a little crazy, but I thought about every detail, down to who could participate, and it got approved by GFWC.” The first year was a huge success, raising $7,500 for the Crisis Center. Since then, the annual event has raised $30,000 in just three years.

The Crisis Center is a nonprofit organization that helps survivors of domestic violence, sexual assault, elder abuse, stalking and child abuse. The Center provides a multitude of services, including a 24/hour crisis line, hospital accompaniment, support groups, emergency shelter, education and court advocacy. The proceeds from this event will help fund programs like these, as well other valuable services, such as providing groceries and travel expenses for survivors.

“It’s easy to forget that this crisis exists,” says Haputly-Pierce. He has done work for the Crisis Center before, and tries to stay as involved as possible. “Lives can be altered forever, especially when there are children involved.”

The event is mostly lighthearted and filled with laughs, but there will also be a talk from Jennifer Patterson, the health policy legal counsel for the New Hampshire Insurance Department – a more serious portion of the evening. The talk will revolve around the Crisis Center and how people can reach out and help. An important message that McGahan highlights is, “you never know what’s going on in someone’s life,” and being educated on this topic is a starting point to helping someone you may know.

Besides helping the Crisis Center, the best part of the event is well, all of it, says McGahan. She especially loves the bond the contestants make with one another. “They have the best time together, and it’s like they make seven new friends … or they’re more like brothers by the end of it.”

This incredible event not only supports a worthwhile cause that touches many lives, but provides a night that is filled with memorable moments, boisterous laughs and empathetic hearts.