A Memorial to a New Hampshire Mother and Author 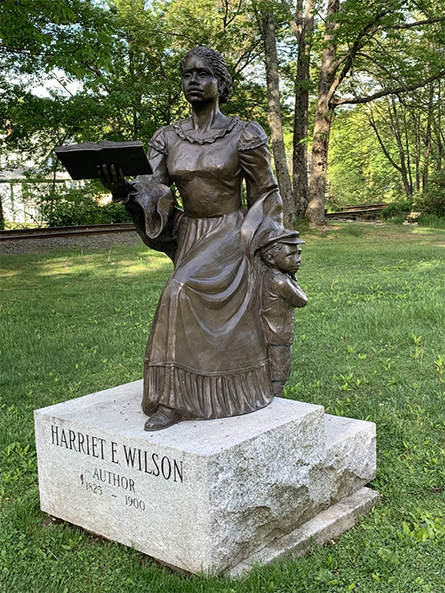 Next to a quiet pond and the old train tracks in Milford’s Bicentennial Park there is a beautiful statue of a woman with her young son. The sculpture was made in honor of Harriet E. Wilson, the first African American woman author to publish a novel.

Dedicated in 2006, the Harriet E. Wilson Memorial was created by Boston sculptor Fern Cunningham, who is famous for the Harriet Tubman Memorial located in the South End neighborhood in Boston. Cunningham studied sculpture at Boston University, and after graduation she went on to teach art to third through ninth grade children for 33 years, burning the candle from both ends — sculpting late at night and on weekends.

According to Cunningham, it took her three years to make the memorial, and she is very proud to honor Wilson and to teach children history through art.

“I am very pleased with it, and I hope children will learn something from it. I think it is very important for children to look at art and to know the story of those who were left out of history. It is so important to hear their stories and to learn about other people,” says Cunningham.

The sculpture was commissioned to promote New Hampshire’s Black heritage and to foster an appreciation for diverse ethnicity. The Harriet Wilson Project was formed in 2003 by founder JerriAnne Boggis, who is the director of the Black Heritage Trail of New Hampshire. The project was also made possible with the help of Mabelle Barnette, Gloria Henry, Claudette Williams, Barbara White, Stasia Millet and Napoleon-Jones Henderson.

The pre-Civil War and seemingly autobiographical novel titled “Our Nig; Sketches from the Life of a Free Black, In a Two-Story White House, North” was published in 1859 and conveys the hardship and abuse Wilson endured. Abandoned as a child, Wilson was forced to work for room and board until she was 18. Destitute, Wilson wrote the book with the hope of supporting her ill son. Sadly, George died at the age of 7 in 1860. Her novel was discovered by a scholar named Henry Louis Gates Jr. in 1982. Wilson died June 28, 1900 in Quincy, Massachusetts.

Discovering art can be a free, fun, family experience. See how great art can inspire you and your children. For the price of a tank of gas, art lovers don’t have to drive far to experience something meaningful.

Always Lovable & Loyal, Archie Is at the Lake

Beauty and Seclusion at the Home of Artist Maxfield Parrish

Learning About the Civil War Through Art