An excursion up Indian Stream in search of a legend 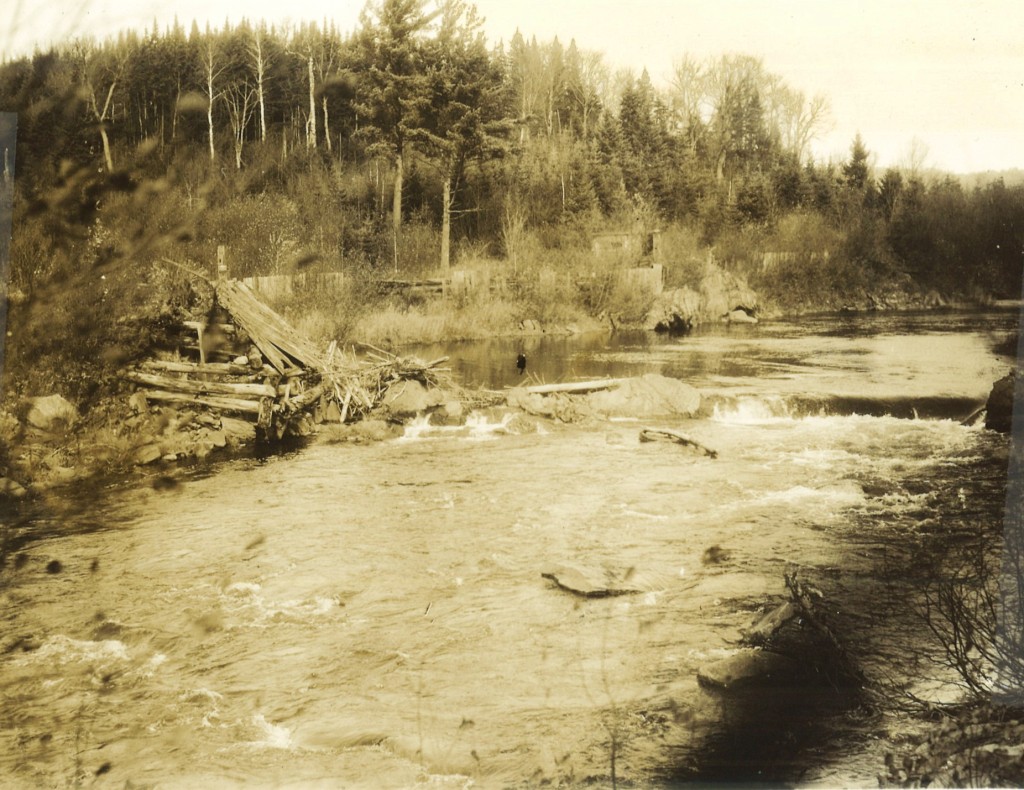 The dynamite had gotten wet and froze, so Boom Boom brought it inside and put it underneath the iron chunk stove, then stoked the fire. The men had been sent upriver to blow the drover’s dam at Kim Day’s homestead on the Indian Stream in Pittsburg. It was a cold, rainy day, and the men were also froze when they reached the remote subsistence farm. As with any good legend, there are conflicting variations of the story, but this version tells that there were no passable roads, so they bumped their way up the streambed in a buckboard drawn by mules.

The muleskinner was a man called “Bacon” said to be the only man crazy enough to attempt to drive a team of mules up a rocky flowing stream. The powder-man was a Canadian named Bosse, pronounced Boss-A. His nickname was “Boom Boom Bossy,” and some said he was the best dynamite man on the river. Others said he was suicidal.

Two river drivers walked point with long pick-poles feeling for deep holes to avoid. The men were working for the Connecticut Valley Lumber Company, and CVL was getting ready to start their annual spring log drive. Most of the time the men walking point were in water over their knees but below the mules’ bellies. Occasionally a deeper spot was unavoidable, and the mules would thrash and swim while the men pushed and shoved until the floating wagon wheels bumped river bottom again. Everything was miserable, wet and frozen when they finally reached Kim Day’s place.

Kim Day was a legend himself. The rugged individualist was said to have a wildcat as a pet, and he preferred to live outside of society, fishing, hunting and trapping to feed his family. His small farm produced enough hay for his animals and potatoes for his children. To earn cash, he sometimes worked for the lumber companies during the log drives. Perhaps he engaged in a bit of smuggling across the nearby Canadian border. Kim Day was a son of old Dan Day, the subject of a little ditty sung in the logging camps of the late 1800s and early 1900s. Each verse of the song describes one of Dan Day’s many children. Kim Day’s verse is perhaps the most flattering, but the song cannot be sung in polite company. If the legend is to be believed, Dan Day’s children included a set of triplets, spawning a joke that in Dan’s home the Lord made three Days in one night. 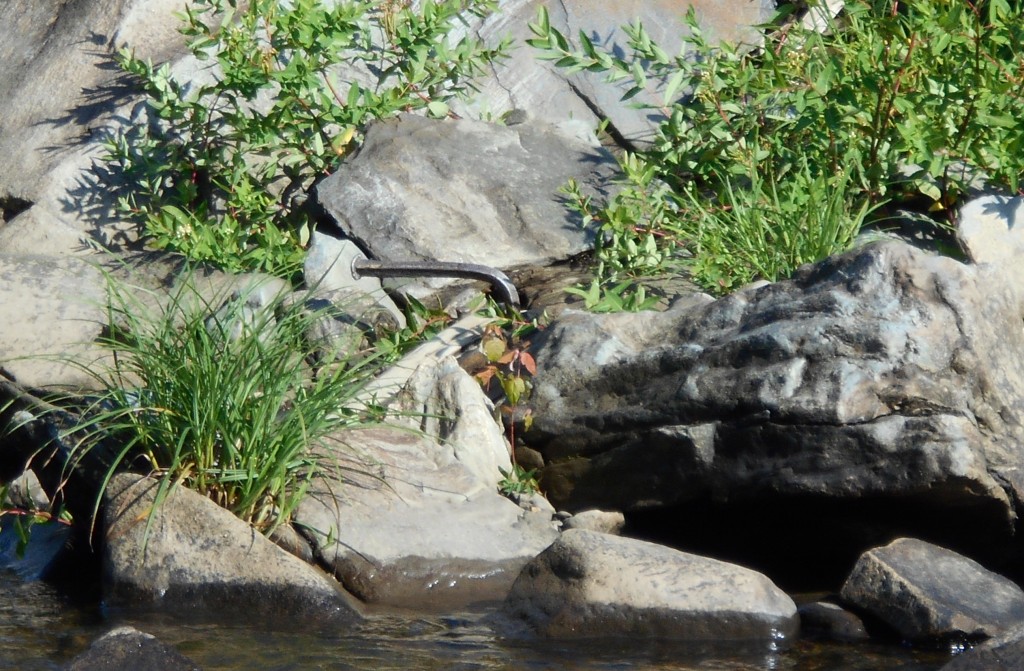 In the streambed, a few cribbing logs remain with long iron spikes bent over in the downstream direction, which would have held the cribbing together.

Warmed and dried by the woodstove, refreshed with molasses cookies and hot coffee, Kim Day guided the men out to the dam they were to dynamite. The drover’s dam was positioned at a natural choke point between two ledge outcrops. The embankments were made of cribbing logs, crisscrossed, spiked in place and backfilled with rocks. The sluiceway was constructed of thick boards pounded vertically deep into the streambed, then backed up with earth and mud. The boards were erected with a downstream lean to encourage floating ice and logs to ride up and over the dam, avoiding jams. A strong cable ran from bank to bank supporting the backside of the leaning boards to keep them from buckling downstream.

A winter’s harvest of sawlogs and pulpwood were waiting along the river and its tributaries for ice-out and highwater to float them to the mills. Blowing the Kim Day Dam would send a charge of water down Indian Stream into the Connecticut River and flush the logs along with the surge. Other dams would also be popped in a timed sequence to keep the logs flowing without grounding out, jamming up or wasting stored water and stranding logs high and dry.

At Kim Day Dam, Boom Boom concluded he would tie several sticks of dynamite to several long poles, then push the poles out into the sluiceway. He’d touch off the fuses and run like a racehorse. If everything went as planned, logs, ice, boards, mud and rocks would go airborne, and a surge of water would shoot down the stream starting the log drive. But plans went awry. While the men were outside preparing to blow the dam, the forgotten dynamite inside beneath the chunk stove thawed. Then it went off. Legend says the house lifted off the ground, and the air filled with flying timbers and stove shrapnel.

Is there any truth to this story, or is it merely a tall tale told for entertaining the gullible? I waded up Indian Stream one day in search of dam remnants to corroborate the legend. From a dusty file labeled “Kim Day Dam” in the archives of a state office, I obtained a 1939 photo of a dam in ruins with its location spotted on an old USGS Quad sheet.

After a long, wet trek, I found the dam site and also appreciation for the misery of Bacon and his mules a century earlier.

There isn’t much left of the dam, and you wouldn’t find it if you weren’t searching for it. The natural choke point remains where the two ledge outcrops constrict the stream. Poking around on the banks here, I found cable remnants. In the streambed, a few cribbing logs remain with long iron spikes bent over in the downstream direction. The weathered remains of what were once the vertical boards of the sluiceway, now eroded off at the waterline, can be found by those with a sharp eye.

Leaving the streambed and searching the nearby woods for indications of anything that might have been Kim Day’s exploding house, I discovered an old bottle in a depression that might have been a shallow cellar hole. Nearby rocks are stacked neatly in a linear formation where someone labored building something. Digging into the duff, I uncovered some metal bands that once held wooden barrels or buckets together.

I’ve found the Kim Day Dam on what was once Kim Day’s farm, and I’ve found one of his farm buildings, perhaps the house of legend. Both the house and dam vanished suddenly many decades ago without leaving much evidence behind, but some hints remain. So perhaps this is a tall tale originating from a kernel of truth but exaggerated with each retelling … or … maybe Boom Boom and Bacon really did fill the air with flying house timbers.