Doctor Gasp, in full regalia, is ready to perform.

Presiding over a grotesquery of six undead musicians is a man in a mask, fez, and satin jacket that is an assault on the eyes. While he belts out a song called “Teeth of Candycorn” on his guitar, a bandmate keeps time rattling chains and banging on frying pans. A madness to the method.

It’s October 31 and Doctor Gasp and the Eeks are playing the Press Room in Portsmouth.

While some acts are built to be celebrated for Christmas or St. Patrick’s Day, the good doctor stands alone on Halloween. Dan Blakeslee, the doctor’s alter ego, spends the rest of the year touring New England and beyond as a folk singer. But come fall, he dons the Doctor Gasp outfit and performs a raucous show full of kitsch and mayhem.

Blakeslee got the idea in 2001 when he took part in a haunted house in York, Maine. He appeared as a ghost cowboy, sitting in a rocking chair and covered in cobwebs, playing disjointed guitar chords to set the mood. After four hours noodling with reverb and wah-wah, he started writing a song.

“I love ‘Monster Mash’ to pieces … but I’m going to write my own and perform it here,” he says. “I performed the song [“Witchtrot Road”] and immediately apologized to the audience.” Just as he thought the experiment was a failure, someone in the back yelled out “I want to put that song out on vinyl next year!” Blakeslee crafted eight more Halloween-themed tunes and put out his first album. He didn’t record as Doctor Gasp until 10 years later on the album “Vampire Fish for Two.”

The music is both artsy and joylessly artless. The standard setup is accompanied by horns, accordion, banjo, an upright piano of dubious pitch and percussion instruments better suited for murder than music.  In an operatic voice, Doctor Gasp spins wicked tales about creatures of the night and perils of the holiday. Fan favorites include “Pingree the Prowler,” “The Phantom Saloon” and “Things Were Odd for Ichabod.” The Eeks really come alive for “RAWR!” a demonic jam band song whose lyrics consist of an occasional guttural growl.

In 2012, his novelty act went on a novelty tour. Doctor Gasp jammed in 31 places that, when plotted on a Google map, connect to form a jack-o’-lantern across New York and New England. “It was a bad idea,” he laughs. “If you get the chance, don’t do it.” To get the dots right, he had to play in a rainy corn field in Connecticut, a swamp in Massachusetts and a covered bridge in Vermont.

Not content to be a seasonal novelty act, Blakeslee dreams of gigging California on a halfway-to-Halloween tour, “Springalloween.”

Blakeslee loves performing as the character because it’s so different from his usual troubadour act. “I’ve always been into punk music. That doesn’t come through in my other stuff. It’s so nice to have this outlet. I can lie on the floor and throw candy corn at the audience.”

And a face full of confectioneries is just what the doctor ordered. 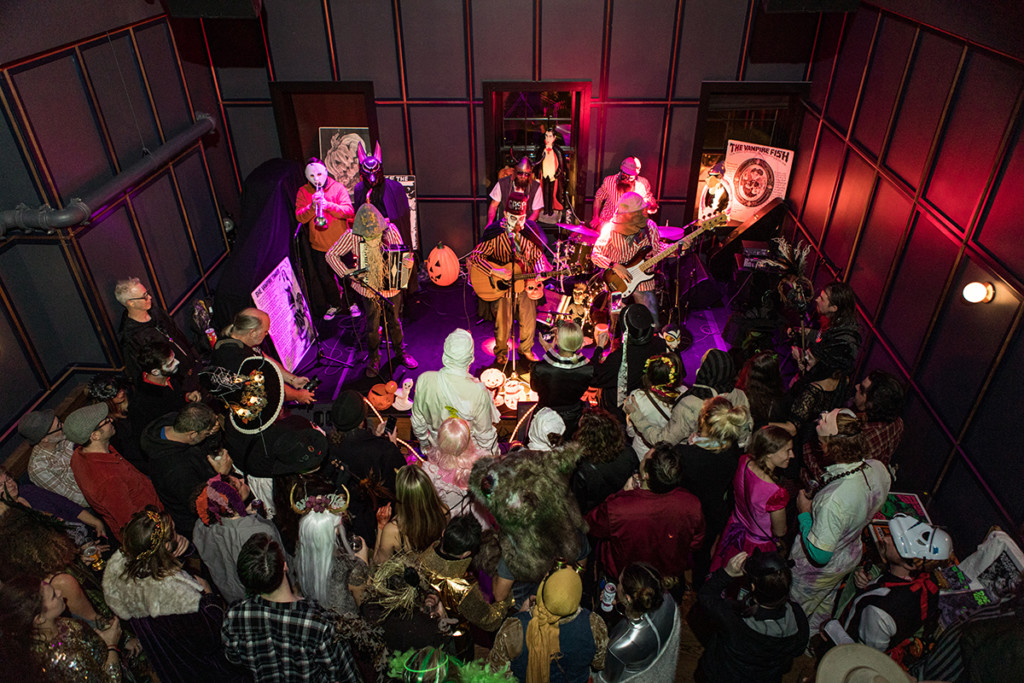 Doctor Gasp and the Eeks plays for an enthusiastic crowd at The Press Room.