Hee hee. What’s that sound? Don’t be afraid. It’s just the vault of history creaking open to release a few strange stories. Fritz Wetherbee, our beloved tale-spinner, won’t let anything harm you as long as you listen quietly. Just remember to exit the vault before the door creaks closed again. 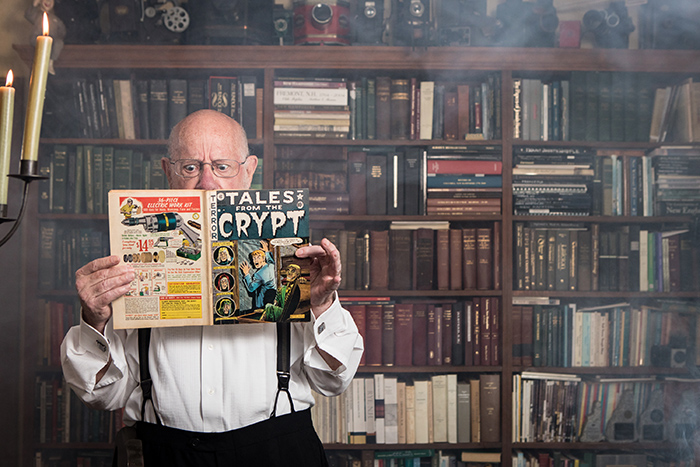 The following stories, written by Fritz Wetherbee, were among about a dozen submitted to the illustration class at Manchester’s New Hampshire Institute of Art where students were invited to transform his recountings of otherworldly terror into graphic short stories. The entire class participated and the editors of this magazine picked their three favorites, displayed here for your reading pleasure (and fright). Fritz shares his spook-filled Halloween stories each October on WMUR’s “NH Chronicle,” so tune in on October 31, 7 p.m., for more tales from Fritz’s voluminous library of horror.

“The Ghostly Parade of Men”

Click here to read a larger version of the story. 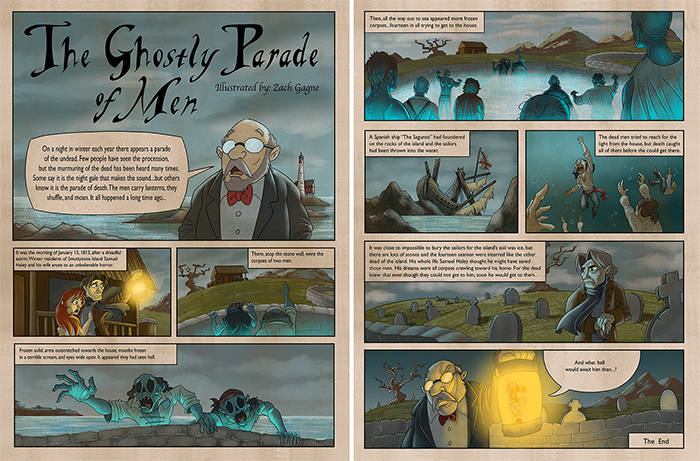 Click here to read the larger version of the story. 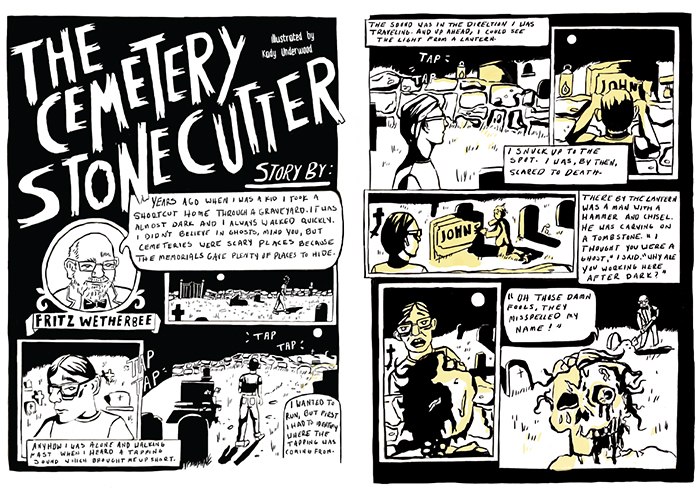 Click here to read a larger version of the story. 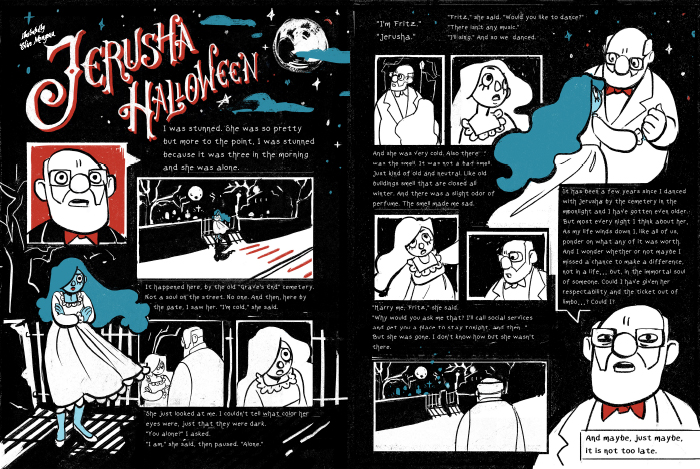 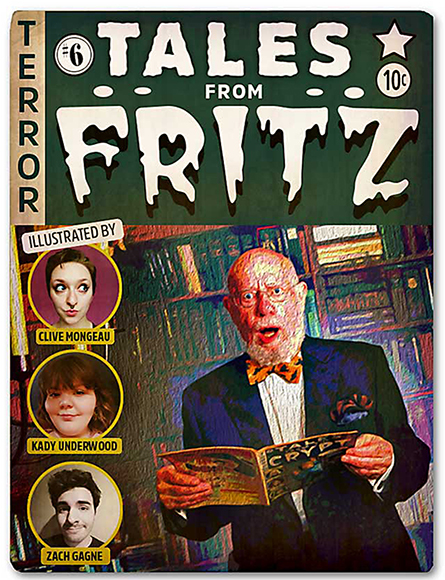 The Twist of the Tales

Fritz Wetherbee is arguably our state’s favorite television houseguest. His nightly appearances on WMUR Channel 9’s magazine show, “NH Chronicle,” reveal him to be a courtly presence in his wire rims and bow tie. You’d think he would spend his free hours deep in the dusty stacks of the NH Historical Society’s library, but in fact his favorite place to conduct New Hampshire research is by wandering among the tombstones of our state’s oldest cemeteries. This made him the perfect character for us to feature in this affectionate rip-off of “Tales from the Crypt,” the flagship title of an iconic brand of comic books that was nearly banned for its focus on horror and morbidity in the middle of the last century.

This collaboration required the indulgence of Fritz, who gamely allowed his stories to be reinterpreted by a talented coterie of young illustration students from the NH Institute of Art. Allow us to introduce them to you now:

Clive Mongeau, who illustrated Wetherbee’s “Jerusha Halloween,” is a senior at the NH Institute of Art. She’s interested in the occult and is currently desinging her own tarot deck.

Kady Underwood, who brought The “Cemetery Stone Cutter” back to life, is a senior majoring in illustration and working on ideas for her senior exhibition and other projects.

Zach Gagne, who colorfully envisioned “The Ghostly Parade of Men,” is a senior majoring in illustration and has plans to become an illustrator for children’s books.

Note: Tune in to WMUR-TV’s “NH Chronicle” on October 31 to hear “Fritz Wetherbee’s Haunted New Hampshire” airing at 7 p.m. Thanks to NH Chronicle’s Executive Producer Maryann Mroczka and to Ryan Ordway of NHIA for their help on this feature. And thanks to Matthew DiMasi of Shattered Comics for the loan of his vintage issue of “Tales from the Crypt.”