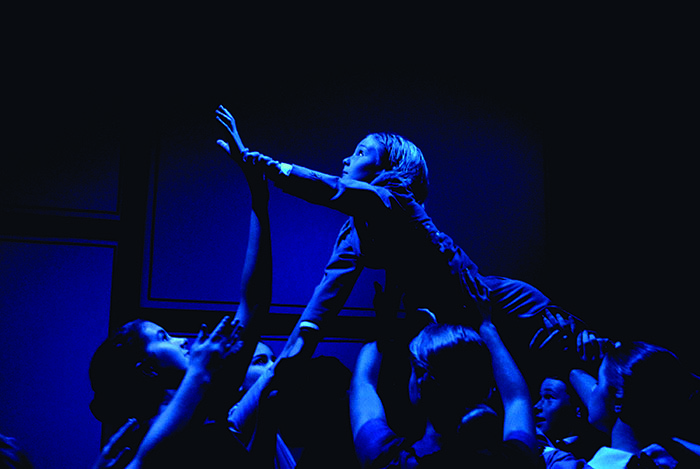 New Hampshire is home to some truly excellent talent and venues. Whether you appreciate Shakespeare or Broadway, there’s sure to be something happening that you’ll love. Here you’ll find, in alphabetical order, seasonal summer theater venues from across the state.

This summer you could spend a sunny afternoon with the family watching a production of “Footloose” at the Prescott Park Arts Festival in Portsmouth, experience Shakespeare’s eternal brilliance in Sandwich, enjoy a night at the opera with Opera North and much, much more.

Advice to the Players

July-August
As Hamlet said in his advice to the players, “Be not too tame neither, but let your own discretion be your tutor” and head over to the Advice to the Players to hear the challenging but inspiring words of Shakespeare. This talented group of Shakespeare enthusiasts has been presenting Shakespeare performances and workshops since 1999. The company is a mix of professionals, community members and teenagers. The 2022 season theme is “The Masks We Choose to Wear.”

July-August
Andy’s Summer Playhouse features innovative plays by children but they’re intended to be enjoyed by those of all ages. From the website: “Andy’s Summer Playhouse exists to provide a safe environment for children to experience and learn about all aspects of the performing arts, with the goal of creating innovative theater for the surrounding community. Andy’s emphasizes education and community building, encouraging all participants to explore their own creativity.”

Click here or call (603) 654-2613 for information, tickets and details on other programs such as the Andy’s Academy workshops, the apprenticeship program and more.

June 30-September 3
Located in the charming small village of Tamworth, the Barnstormers is one of the longest-running professional summer theaters in the country. The company was founded in 1931 by Francis Cleveland, the youngest son of President Grover Cleveland, Francis’s wife Alice and their friend Ed Goodnow — all of whom were involved with theater on Broadway. Today, The Barnstormers is one of three Equity theaters in New Hampshire, and consists of over 40 professional actors, some of which have been performing at Barnstormers for 50 years.

Boundary-pushing black-box theaters may seem like a luxury reserved for college campuses and big cities, but Concord has one of its own. The 99-seat space (located in a former Coldwater Creek in the Steeplegate Mall) hosts a wide variety of theatrical and performing arts productions throughout the year, from one-act plays to magic shows by the theater’s owner, Absolutely Magic’s Andrew Pinard. Here’s a sample of what’s coming up summer 2022:

June 30-August
This company seeks to bring the Lakes Region a wide variety of productions, from children’s theater to classic favorites. Join them for the 2022 season as they celebrate their 15th anniversary.

June-September
This North Country theater has been open for more than three decades and prides itself on bringing the community together. Over 150,000 locals have come out to support the theater and each summer the children’s theater entertains over 12,000 members of nearby communities. Jean’s Playhouse is home to many concerts and events throughout the year, but stop by in the summer and fall for great theater, including an outdoor production of “The Sound of Music” planned for summer 2022.

Tucked away in a strip mall on the edge of the White Mountains, North Conway’s M&D Playhouse has quietly amassed a reputation in its 19-year history for staging some of the most challenging theater in the state. Daring past productions include “Equus” and “Glengarry Glen Ross.” Below are this summer’s shows, but performances continue into the fall and winter.

June-September
One of the oldest summer stock theaters in the country, the New London Barn Players combine emerging talent with seasoned professionals to produce high quality theater. Although some things have changed since its 1933 opening (such as the 50-cent tickets), Mr. Holmes’ core mission still stands true — “To establish … a theater group presenting dramas of stimulating artistic and literary merit.”

This July, Opera North is celebrating not just the return of its unique Summerfest but a major anniversary — 40 years as the only full-time professional opera company in the tri-state region of New Hampshire, Vermont and Maine. From July 8 to 31, Opera North invites you to visit the extraordinary venue of Blow-Me-Down Farm on the banks of the Connecticut River in Cornish during four different performances.

In 2017, the National Park Service chose Opera North to partner in the creation of a park for the arts at the 46-acre property, which is deeded to the adjacent Saint-Gaudens National Historic Park. Augustus Saint-Gaudens was one of America’s great sculptors, and he lived seasonally in Cornish starting in 1885 and year-round from 1900 to his death in 1907. The sculptor’s friends — some of the most talented artists, musicians and writers in the country — joined him there, creating what became known as the Cornish Colony. Today, you can visit the gorgeous home and grounds, which is sprinkled with Saint Gaudens’ sculptures. Opera North is reviving that artistic spirit, and Summerfest is a fantastic opportunity to be a part of the exciting process.

July-August
The Palace Professional Theatre for Children Series takes the stage this summer at one of New Hampshire’s most well known and historic theaters. The beautiful 840-seated theatre is the only one of it’s kind in the area. The children’s series will have you and your children leave the theatre singing.

June-August
A true rustic theatre company, the Peterborough Players was founded in 1933 and perform in an 18th-century barn to this day, but don’t worry — there’s air conditioning.

June-August
A delightful summer tradition since 1974. Held in the waterfront Prescott Park, the festival offers a full summer of events that are family appropriate. The main musical is featured here, but the festival includes much more, including other live theater performances, outdoor movies, music, a fairy house tour, chowder fest, road race, chili cook-off, brewfest and other entertainment and special events.

All year
This award-winning professional performance space once acted as the warehouse for the Portsmouth Brewing Company in the ’70s but has since made a great addition to the seacoast community’s theater life. Though there are performances all year long, Portsmouth is a popular summer destination, and it would be a shame to leave out this excellent theater. While you’re in town to soak up some summer seaside life, stop in at the Rep for an excellent show.

June-September
The Weathervane Theatre brings Broadway all the way to North Country New Hampshire for its 57th season this summer. Weathervane is the only professional alternating repertory theatre in the country, producing seven shows in eight weeks — a different show every night. See the full calendar here.

June-September (and beyond)
The Playhouse is a nonprofit, award-winning theater specializing in high-energy shows. Newer to the theater scene, The Playhouse was founded in 2004, and was soon thereafter regarded as a cultural gem of central New Hampshire. You can catch performances in the fall and winter as well, but there’s something extra special about catching a show on a warm summer evening after a day spent on the lake. This year, three shows will be performed at the outdoor amphitheater (noted below). The Playhouse also offers some excellent summer youth educational camps and other programming.

Beyond the Brush: Seacoast Artist Association