The Mt. Caesar Union Library Association invites boys to ring the libary bell on the Fourth of July 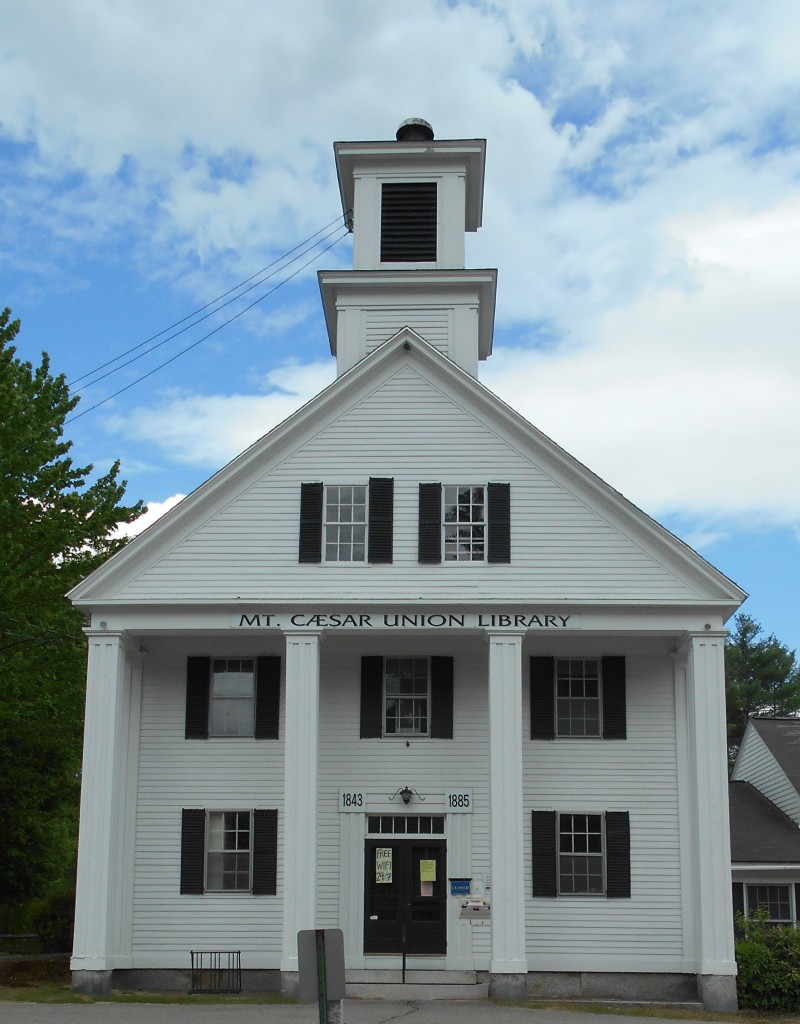 Each 4th of July, town children are invited to ring the bell at Mt. Caesar Union Library. Photo by Marshall Hudson

“… as long as the Country remains free and independent, the Boys in the neighborhood shall have the right to Ring the Bell on each succeeding Fourth of July,” requires the reverter clause in the deed I’m reading. The old deed also stipulates that the building can never be used for “the sale or use of any intoxicating liquors or drinks whatever; that it shall never be used for dancing, card playing, gambling, or skating” and that “It shall never be used for any immoral purpose whatever.” … Skating? I presume the deed speaks of roller skating, and while I’m familiar with the concept of the sins of drinking, gambling, dancing, and other immoral purposes, I have to wonder what George Carpenter had against roller skating in 1885 when he deeded the property to the Mt. Caesar Union Library Association.

Arguably, if a librarian were to allow a roller-skate-wearing patron into the building or fail to ring the bell on each succeeding 4th of July, the heirs of long-gone George Carpenter could raise a claim of ownership in the building under the terms of this reverter clause. I’m wondering if sometime in the 136 years since this deed was executed, might not two patrons have discreetly knocked back a swig from a shared pocket flask during some celebration? Or does it constitute dancing if a patron spontaneously head jives to a tune on their earbuds while reading? Probably more of a theoretical question for legal scholars to debate than an actual concern for this library.

I’m in Swanzey at the Mt. Caesar Union Library. The library was originally founded in 1843 as the Mt. Caesar Seminary, a Universalist denomination all-boys school. The seminary’s founding trustees were searching Cheshire County for a suitable place to build their school when Swanzey landowner Amos Bailey offered them his property. Bailey proposed selling them four acres for $75, or just the front half for $50. The frugal trustees chose the second option and began selling off shares in their new school to raise money for the purchase of the land and construction of the necessary buildings.

A Greek Revival-style school building was erected with a prominent bell tower front and center. Directly across the road, a dormitory was constructed for boarding students. The headmaster lived in residential quarters inside the school and rang the bell to awaken students in the dormitory and summon them to classes. The bell did not need to be thunderous and disturb people all over town, only loud enough to bring the boarded students across the road.

The seminary offered a solid curriculum including algebra, Latin, grammar and composition. Attendance peaked from 1853-58, when enrollments exceeded 120 students. The seminary flourished for a few years, but interest in its welfare by the shareholders soon waned. By 1860, enrollment was in a steadily downward trend, so the Mt. Ceasar Seminary for boys was renamed the “Swanzey Academy” and transitioned to a secular curriculum and began admitting girls. Instablity and decreasing enrollments continued as public schools competed for students. By 1866, trustees and shareholders had lost confidence and voted to close the school. The building sat vacant and mostly idle for some 20 years. There were incidents of vandalism and reckless use of the building. Something needed to be done if it were to be saved.

To the rescue came George and Lucy Carpenter, who lived nearby on the shoulder of Mt. Caesar. George Carpenter was a local farmer who also took an interest in politics and local matters. Carpenter had served as a representative in the New Hampshire Legislature and had run unsuccessfully for governor and Congress as a member of the Greenback Party. Legend suggests he may have also made money in railroad building, constructing tin roofs or in the California gold rush. Lucy was the daughter of the locally prominent Whitcomb family. Both George and Lucy had been educated at the Mt. Caesar Seminary/Swanzey Academy, and George’s grandfather, Elijah, had been involved in the original construction of the building. The formidable couple decided to save the building and started buying up shares of the property from shareholders only too happy to part with their ownership in the failed venture. By 1885, Carpenter was the sole owner of the property. 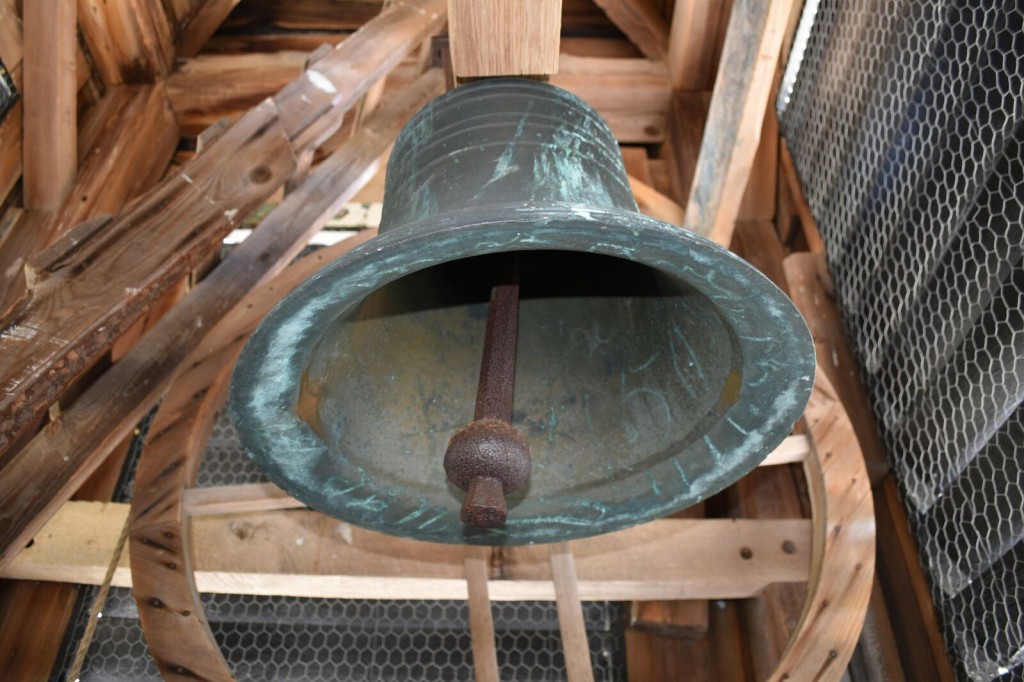 The modest library bell is probably not as loud as you might expect. Photo by Marshall Hudson

For $1, George Carpenter then sold the land and building to a small group of women known as the newly formed Mt. Caesar Union Library Association. The Mt. Caesar portion of the title comes from the mountain across the road, which is more of a hill than a mountain This hill, which was originally called Meeting House Hill, was changed to Mt. Caesar to recognize a slave named Caesar who settled Swanzey with the founding fathers. Carpenter identified a potential use for his recently acquired former school building in the small subscription libraries of East Swanzey and Swanzey Center and some other organizations that also loaned out books. In an effort to consolidate these, he incorporated “Union” into the title, and then deeded the property, with the unusual deed stipulations, to the private nonprofit association for use as a public library.

Today, it remains a private library that is open to serve the general public. It is managed by a board of trustees who are not town officials and who serve without compensation. The Town of Swanzey subsidizes the operating budget with tax dollars and, as such, is entitled to one representative on the board. In addition to the town’s support, Mt. Caesar Union Library also relies on a small endowment, community donations and book sales to fund its operation.

The library honors the deed stipulation every year by opening the doors for an hour or two each 4th of July, allowing the neighborhood boys to enter the foyer and tug away on the bell rope connected to the bell three-and-a-half stories over their heads. Occasionally, volunteers, sometimes in period costume, will perform a reading of the Declaration of Independence from the library steps. I’m told that the old bell, installed as a wake-up call for the boys across the road, lacks the thunderous resonance you might expect of a bell suspended in such a prominent bell tower. The “clang” is described as a thin, modest output sufficient enough to accomplish its intended purpose, but hardly worthy of celebrating a free and independent country on the 4th of July.

While the library complies with the spirit of the deed requirement in permitting the boys to ring the bell each succeeding 4th of July, perhaps they may not be meeting the strict literal interpretation because girls in the neighborhood are also welcomed to yank on the rope and ring the bell. Just as long as they are not wearing roller skates.