Each year on and around Veterans Day, social media, ads and even sports broadcasts are filled with messages of thanks to those who have served in the armed forces. It can be easy to scroll by or flip the channel without really thinking about what the day means, especially if you don’t know a veteran personally. Sometimes it’s easy to forget that those who served our country are our parents, grandparents, siblings, neighbors, colleagues or even student peers. They are members of our communities and deserve our thanks as well as our support.

As a senior undergraduate at the University of New Hampshire, I am one of thousands of students who are, broadly speaking, the same — we’re of similar age, generally started college soon after high school and are considered “traditional” students. But not everyone follows the same path, and there are a number of “nontraditional” students at UNH. And, among those, are student veterans.

The latter group can be found at universities in every state, and New Hampshire is no exception. At UNH there are 537 military-affiliated students and 354 veterans that are actively serving, according to the Student Veterans Services (SVS).

Among its services, SVS helps veterans as they transition from military to student life. The office is located in Hood House, and for many student veterans, it’s a place to study, gather and find assistance and guidance. There are a handful of veterans who decided to start college later in life and, in my opinion, they have a special type of courage.

Three students, Doug Ridoski, Manuel Sahagan and Jonathon Davis, are all former military who decided it was time to pursue an education. For this year’s Veterans Day, you’re invited to learn their stories. 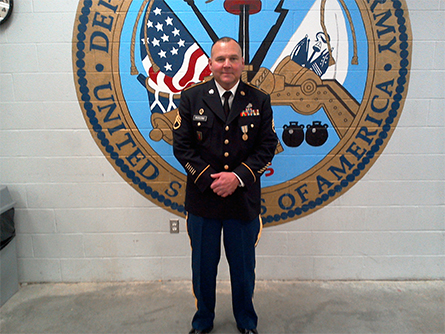 In the fall of 2009, Doug Ridoski sat in his first classroom since high school — an entry-level Arabic class in the antique Murkland Hall. For most of his adult life, Doug had dreamed of studying alongside fellow students at the University of New Hampshire. But the lack of financial and personal support long put his dream on hold.

He spent the latter half of his life in and out of active duty. In 1981 he joined the Air Force in Florida, and soon experienced New Hampshire’s seacoast from 1982-83 at Pease in Portsmouth. He was on active duty in the Air Force until ’86, and then the Army until 1990.

During the ’90s, he took time away from the military and moved back to a place he was always fond of — Newmarket. He worked at an office supply and the Best Western in Portsmouth, while consistently visiting UNH but never enrolling. As for many who joined the military after 9/11, Doug felt a sense of obligation to reenlist, so he joined the Army Reserves. From 2001 until present day, Doug has been on active duty reserves. He was deployed three times to Iraq, from 2003-04 and 2008-09 with 320th Military Police Company out of St. Petersburg, Florida, and in 2010-11 with the unit he is still with today — the 94th Military Police Company in Londonderry.

Between his deployments to Iraq, Doug tried to pursue his education at UNH. As the war wound down, he was finally able to take classes with the aid of the GI bill.

When he arrived at UNH in 2009, he reached out to both admissions and the Military Veterans Office. Although he is a nontraditional student, that never stopped him from making the best of his UNH experience. He made a promise to himself the first day he walked into his Arabic class — he wouldn’t linger in the background, and would put himself out there. And he has stood by that commitment.

Doug is a well-known member of the UNH community. He often sits in the Memorial Union Building (MUB), always with a smile on his face. He says it’s a great way to meet people and feel a part of the campus. On most weeknights, you can find him at either of the student publications, The New Hampshire or Main St. Magazine.

In 2017, Doug graduated with an undergraduate degree in anthropology, and in 2020 he’ll finish his MFA. The end goal for Doug was to get an education at UNH, and, he says, the military did help in certain ways. Thanks to his older age and experiences outside of the classroom, he enjoys giving insight to younger students and new student veterans who are joining the UNH community. To those new student veterans, he says it’s important to get involved and know you’re not alone. Don’t be afraid to seek help and company, he says, because there are so many services at the university there to help.

Helping others is important to Manuel Sahagun, a senior undergraduate student at UNH, where he’s working to finish his bachelor’s degree in social work so he can come full circle, assisting fellow veterans as they return home.

In 2000, Manuel decided to join the military. At that time, some of his friends from high school began to get involved in illegal activity, something he wanted to no part of. Instead of following along, he went to a military recruiter, and within a month he was in training. In 2002, he was deployed to Afghanistan with the 82nd Airborne Division.

Three years later, he faced the decision of whether or not to reenlist. His initial contract was only for three years, but like many, Manuel decided to sign on again, this time until 2009. He went to Iraq three times and once to Afghanistan. Throughout his four tours, his dedication to his family never faltered. In that time, his wife gave birth to their daughter. After his last deployment, his family moved to California to spend more time with relatives, as family and friends are extremely important to him. For a lot of veterans, coming home can be a huge and difficult adjustment, and many suffer from PTSD. But Manuel is fortunate to have support at home, and attributes his painless transition from soldier to citizen to his family.

His story of homecoming is unfortunately not every veteran’s story. Recognizing this, Manuel felt called to help those who do not have the support system he did. This realization made him want to aid his fellow veterans in some way. Back in the Granite State and knowing that he wanted to attend college, he enrolled in Southern New Hampshire University. With a few semesters under his belt at SNHU, he realized his passion was in social work. With this new vision, he transferred into the UNH social work program to finish his degree.

Social work for Manuel is a humble means of helping veterans who need help transitioning back to civilian life. There are many different ways in which he could see his career unfolding — perhaps at a veteran affairs department, in drug and alcohol addiction program or in another government setting where he could share his knowledge and experiences with those who need it.

Coming up on 40, Manuel isn’t the “traditional” student, and that age difference could have easily set him apart from the “typical” student. But he pushed past that gap, immersing himself in campus life at UNH.

College and the military are more alike than you might think, he says, and he describes both as places where people of all ages, cultures and backgrounds come together for a singular reason. With this outlook, he found it easy to fit in. The transition to UNH wasn’t difficult he says, especially with the aid of the Student Veteran Services and his professors. He also leveraged his experience in the military to his advantage. For example, when working on group projects, he found that experience gained due to both his age and military service could help younger students.

For veterans who want to attend college but are hesitant, his advice is to “be a leader, be patient and listen.” It’s important, he says, to listen to younger generations because they offer a different perspective — you can learn from them as much as they can from you. “And don’t be afraid to raise your hand,” he adds.

Next spring, Manuel plans to graduate with a bachelor’s degree in social work, and will begin working on his master’s at UNH or another university. 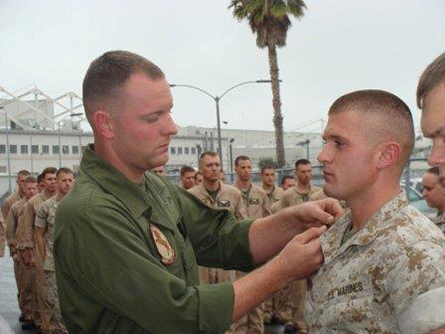 After a string of bad luck in his early 20s, Jonathon Davis has finally found his stride at UNH.

Growing up in the small town of Lincoln, New Hampshire, he was unsure of what he wanted out of life. At 20 and failing his courses at NHTI, he dropped everything and decided to sign his name on the enlistment line — a moment changed his life forever.

Soon after tearful goodbyes, he was in boot camp in Pensacola, Florida. There he did extremely well in his ‘A school’ classes, graduating with the highest marks. Despite his excellent grades, he was unable to choose his top choice of career path within the Marine Corps. This was his first lesson — it’s not always about what you know, it’s about who you know. Nevertheless, he worked hard and didn’t give up — and his dedication would eventually pay off. He spent four years working on the Miramar base in San Diego and had opportunities of moving upward in the Marine Corps, but his heart pulled him in a different direction. Getting a higher education was what he had always wanted, so that’s what he did.

The next few years of his life wouldn’t be easy. His time in the military inspired him to see more of the world, and he couldn’t picture himself moving back to Lincoln. In 2013 he moved to Colorado with relatives and started taking classes. He received his associates degree in geography at Pikes Peak, but he wanted to do more, so he enrolled in the University of Colorado Colorado Springs for his bachelor’s degree.

It was here that an unfortunate series of events forced him to withdraw from UCCS within a month of enrolling. Within weeks, he moved out of his relative’s house and lost the work study position he had at the Veteran Affairs office. It was then he decided to return to New Hampshire for a fresh start at UNH.

Despite his nontraditional path, his struggles did not discourage him. Instead, he accepted the situations he found himself, and worked with them. He learned this lesson both from his time in the Marine Corps and from his parents — giving up was never an option. This mindset has helped him acclimate to life at UNH. At 31, it was difficult to live on a campus surrounded by young college students, but he stuck with it, fighting through solitude. Today, in addition to achieving academic success, he’s joined clubs and works alongside professors within the homeland security major, making the most out of his education.

To any veteran thinking about school, he says to go for it. “It’s not as scary as writing your name on the line, or like that first night at boot camp,” he says. The process of gaining knowledge never ends, and life is a continuous journey of learning and broadening your horizons, he adds. And at the end of the day, challenging yourself, participating, being wrong and learning every day is what college is about — not your age.

“Anyone who stops learning is old, whether at twenty or eighty. Anyone who keeps learning stays young.” – Henry Ford.