Rumney is known for its rocks, to the delight of climbers, kids and people like me who “collect” interesting rocky places.

The town’s settlers stuck with it despite the rocky terrain, farming the rich valley land beside the Baker River, and by the mid-1800s, the town of more than 1,100 had 15 sawmills and a couple of other local industries.

Rumney Village looks much as it did then, with homes around the common, a church, a tavern (now The Common Café and Tavern, though still closed as the issue went to press) and the former Stinson Hotel (no longer a hotel but with its sign identifying it). This center is largely intact, reflecting the transition from a farming community to a small-scale industrial town. The industries sat close to the rivers, their power source.

Just behind the church, beside the brick-and-granite Byron G. Merrill Library on Buffalo Road, the former town hall is now the home of the Rumney Historical Society. Built in 1856 as a Methodist and Universalist church and later used by the Baptists, it was given to the town and served as town hall until 1990 when the historical society assumed it.

This active group maintains a museum (open Saturdays from Memorial Day to Labor Day), offers occasional free guided walks, and sponsors two popular summer events, an ice cream social in July and Old Home Day in August. In front of their building, a large signboard shows locations and photos of historic buildings in Rumney, several of which are still there. Of course, we set off in search of them.

On Old Route 25, we found the West Rumney Community Church, a perfect example of the Stick Gothic architecture popular in the late 19th century. Old Route 25 continues through the center of West Rumney, where we also identified the former school and a general store building. From Old Route 25, we also got a good view of Rattlesnake Mountain’s cliffs to the north. Back to them later.

Climbing north from the common, Stinson Road leads to the good-size Stinson Lake, past the former home of Mary Baker Eddy. She lived here in 1860 to 1862, and the house has been restored to its appearance when she lived here; it is open to visitors four days a week, May through October.

Farther on, a state historic marker points out Loveland Bridge, site of the crutch mill operated by Lewis H. Loveland Jr. from 1890 through the first decades of the 20th century. During World War I and its aftermath, the company manufactured more than 3,000 pairs weekly, earning Rumney the title of the “Crutch Capital of the World.”

Stinson Brook may look small, but it has a significant drop and at one time 30 mills operated on its power over its four-mile length. Surrounded by forest, Rumney was known for its lumber industries and wood products (there was also a ladder mill), along with mica mining and stone quarries (no surprise here).

South of the common, Main Street leads to the adjacent settlement of Rumney Depot, alongside Route 25. A short distance east on Route 25 is one of the best-known (and, for our kids, best-loved) tourist attractions in the state: Polar Caves.

At the close of the last ice age, as the glaciers retreated, the mile-high mass of moving ice scraped off everything that would give way, often carrying huge chunks of rock far from their original mountain-tops. Some of these were tossed and tumbled over some distance before being dropped by the melting ice — those are glacial erratics. 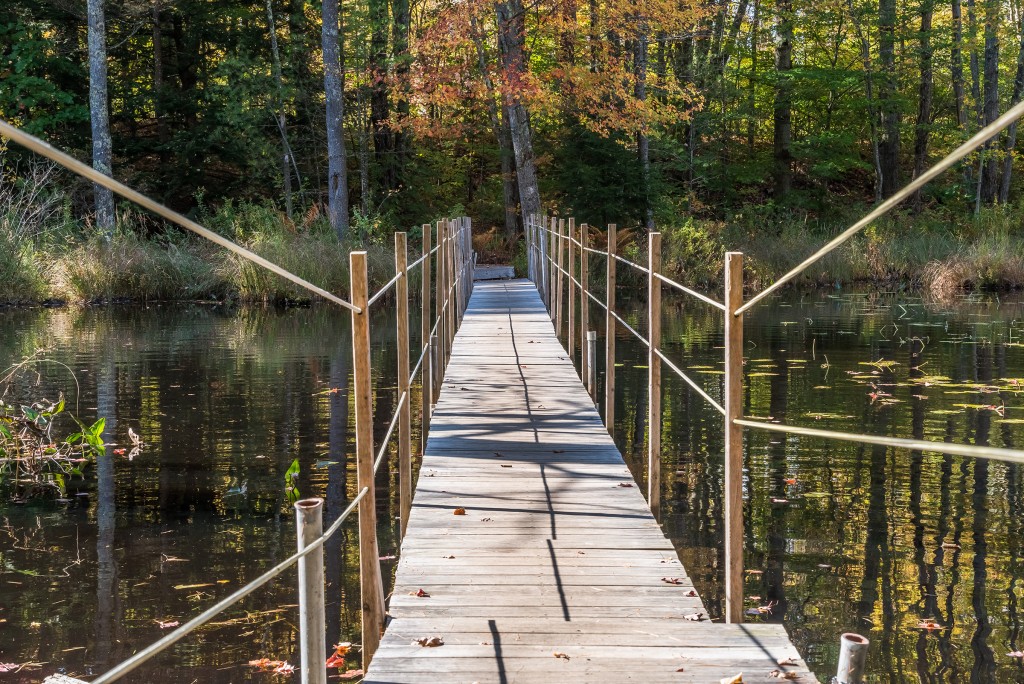 Quincy Bog offers trails and boardwalks for easy access to much of the area’s flora and fauna. Photo by Stillman Rogers

Elsewhere, the huge chunks carved from cliff faces fell and stayed where they landed, creating talus tumbles at the foot of the cliffs. Polar Caves is the outstanding example of such a talus field, an immense area of irregularly shaped stone slabs that created deep caves and narrow passageways in the spaces between them. Aided by wooden stairways and lights in the deepest areas, visitors can explore these, walking and crawling through irregular tunnels between them.

Ice that forms in the deepest areas in the winter remains frozen as late as June or July, and the caves are cool on even the hottest summer days. Signs and audio narration throughout relate stories of the Polar Caves’ history, explaining the former uses of the caves by Native Americans, runaway slaves and Prohibition-era smugglers.

Less known, except to avid rock climbers, are the giant talus boulders that cover the base of Rattlesnake Mountain’s cliffs, alongside Buffalo Road, west of the village center. Their popularity with climbers was evident from the overflowing parking areas, and as we wandered among the giant chunks of fallen schist and granite, we could hear climbers calling to each other as from the cliffs overhead. The Rattlesnake cliffs are one of the premier sport-climbing destinations in the country.

For nonclimbers, more than 20 huge boulders are easily reached within 100 yards of the two parking areas, some of them forming caves. The biggest problem in wandering among them is finding a place to park. While these huge boulders are not glacial erratics, and unlike most erratics, the mountain they came from is no mystery, they are still on my list of New Hampshire’s best places for rock-lovers like me.

Elsewhere, in characteristic Yankee fashion, Rumney made wise use of its cliff-droppings by using them as walls of the town pound. On Quincy Road, between Quincy Bog and the Rumney’s common, a large boulder sits close to the south side of the road. Opposite it is the pound, with three large boulders forming two sides and half of another, so the town only had to build one and a half of the usual four stone walls to confine livestock.

The Quincy area was one of the first areas settled shortly after its second charter was granted in 1767, and farmland still lines Quincy Road. One last reason for exploring Rumney lies off this road — the Quincy Bog. While many may not have our fondness for bogs and their flora and fauna, this bog has an irresistible attraction: what is likely the biggest beaver dam in the state — or at least the biggest one you can walk to easily.

The beaver houses around the bog’s central pond are impressive too, and one of them is right beside the bridge that spans the outlet of the pond. Boardwalks and trails lead all the way around the pond, through a world of cedar trees, tamarack, ferns, gnarled roots and sphagnum moss. Champion tamaracks and pitch pines are labeled, and the bog is alive with tree swallows, chickadees, ducks and red-winged blackbirds.

The Nature Center has information on the birds and plants, and holds weekend nature walks and workshops, and free Wednesday evening programs. And because it’s in Rumney, the bog has its own section of ledges, but it’s only a hint of those at the other end of town.