Rich Benoit and his team repair Teslas at his Seabrook garage 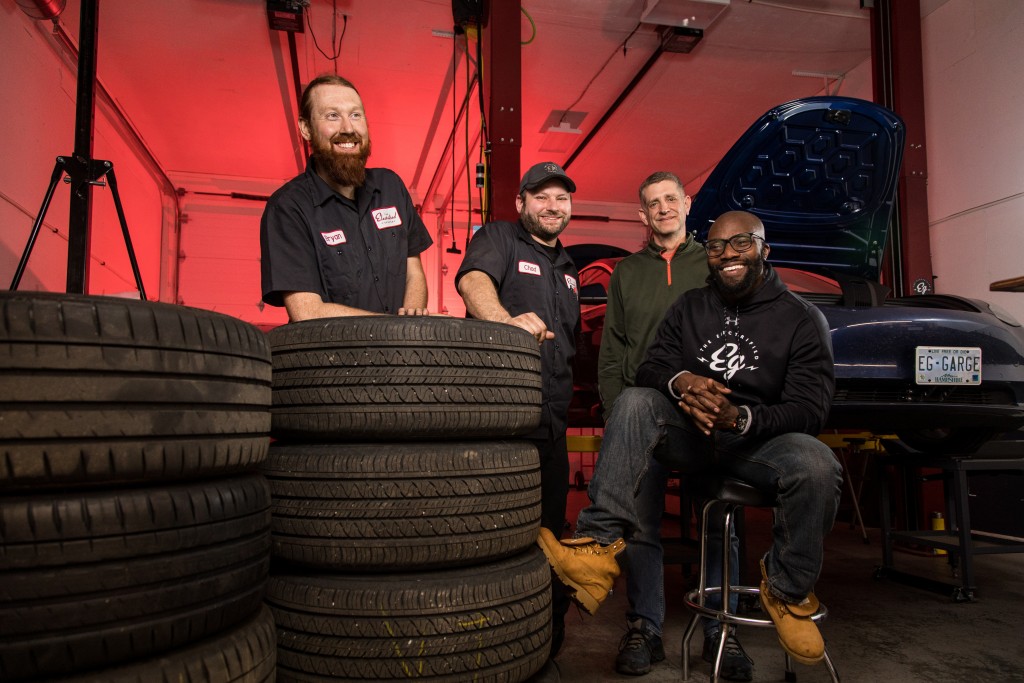 From left: Bryan Maynard, Chad Hrencecin and Peter Stich take some downtime at the Electrified Garage in Seabrook. Photo by Kendal J. Bush

Watch any video that Rich Benoit uploads to his Rich Rebuilds channel on YouTube, and it doesn’t take long to notice his humor. Snarky, tongue-in-cheek, and punctuated by fast-paced graphics and visual blandishments to accompany the information he provides.

In other words, come for the laughs, stay to learn how to convert a Mini Cooper from gas to electric or how to service your own Tesla. Even people who never change their own oil won’t miss an episode.

As the channel closes in on 900,000 subscribers, Benoit’s talents have not gone unnoticed by media around the world, from Vice and “The Joe Rogan Show” to The Boston Globe and Car and Driver. A long-time resident of Salem, Massachusetts, he opened The Electrified Garage — devoted solely to electric vehicles — in Seabrook, New Hampshire, in the summer of 2019 with his two partners Chris Salvo and Chad Hrencecin. Another branch launched in Florida in late 2020 with the ultimate aim to expand throughout the country.

All this is the direct result of the time he reluctantly climbed behind the wheel of a Tesla Model S back in 2014. A fan of muscle cars since before he could walk, and a devoted gearhead since before he could drive, the extreme power —  and quiet — of the electric car made him shift gears in just 15 minutes. “I wanted one, and I wanted it now,” he says.

But as a father of three holding down a full-time job at an IT help desk, the high five-figure price tag was well beyond his reach. Like any true Yankee, he’s an inveterate hoarder and cheapskate, and after bringing several salvage vehicles back from the dead, he figured he’d do the same when he bought a 2012 Model S flood car. Throw in a bag of rice, just like with a cellphone, and it’d be good as new.

Benoit named the car Dolores after a scrappy female protagonist in “Westworld,” and got to work, removing bolts, corroded battery terminals, and the occasional dead fish — it had been submerged in saltwater during Superstorm Sandy — cataloguing each piece before tucking it into a Baggie.

“I was that annoying kid who was always asking ‘But why?’” he admits. After taking apart VCRs and fake Rolex watches his father brought back from business trips, he moved on to cars. When he was 11, he took apart the wiring assembly in his mom’s Geo Metro, and after putting it back together, he figured out how to shift into reverse.

He applied his childhood lessons to Dolores, and made good progress until he needed parts for the car. At the time, Tesla’s policy was to stonewall owners who wanted to work on their own cars, and refused to sell him any parts, or provide him with service manuals for that matter. Massachusetts had a Right to Repair law that obligated auto manufacturers to help consumers who worked on their own cars, but the law specifically applied to dealerships. Tesla didn’t have to cooperate since they only sold their cars online.

Undaunted, Benoit turned to online forums for advice on where to get parts and for help with his problems. He also posted his own solutions with videos, which quickly attracted viewers who appreciated his straightforward advice laced with wicked humor. Others soon started asking him for help, so he began posting his forum videos simultaneously to a YouTube channel he created. 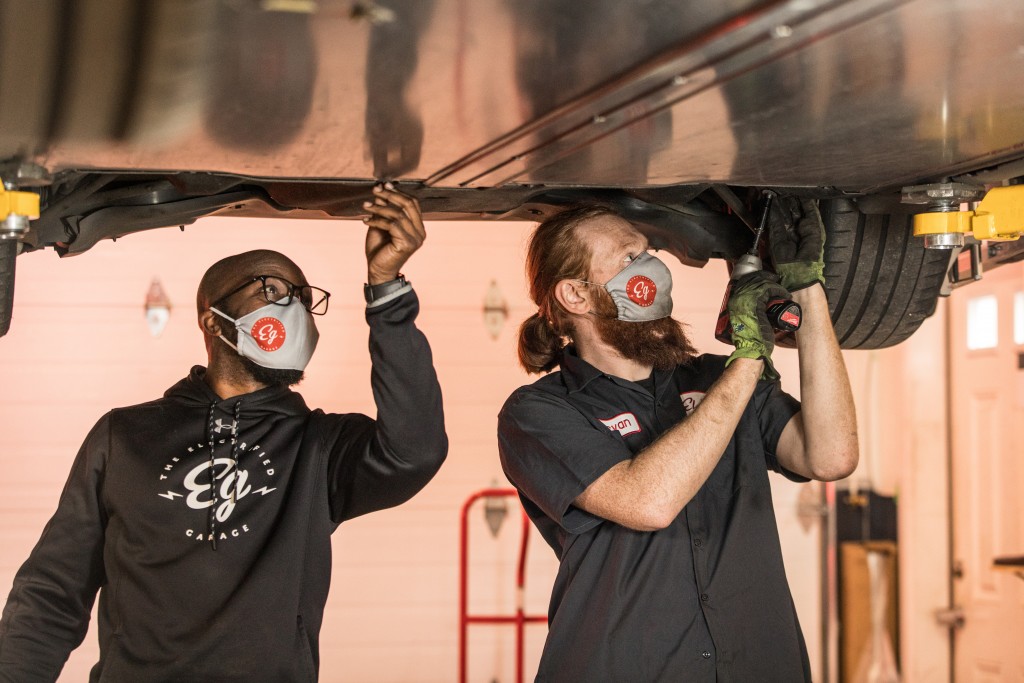 In his early videos, he deliberately remained off camera. “I wasn’t intentionally trying to hide who I was, though I was uncomfortable being in front of the camera, and thought the focus should be on the car in any case,” he explains.

One day, he posted a video on the forum where his hand accidentally came into view, and all hell broke loose: The racist comments — and rebuttals — flooded in. Moderators deleted the negative posts as soon as they came in, but the controversy attracted more viewers to his YouTube channel.

Around this time, he received a check for a hundred bucks from YouTube for advertising revenue. He soon stopped posting videos on the forum and switched exclusively to YouTube.

He doubled down on working on Dolores, but he was still running into end-less roadblocks when it came to finding parts. He had a Facebook page for buying, selling and trading Tesla parts that wasn’t yielding much, when he realized he could solve a lot of problems if he had another Tesla that was broken in all the ways Dolores wasn’t. He found a wrecked Model S that he christened Slim Shady and spent the next six months playing Dr. Frankenstein.

The first time he drove Dolores was no less powerful than his first ride in a Tesla, but in a whole different way. “I did this,” he says, “not a bunch of engineers.”

Podcasts and blogs devoted to Teslas and other electric vehicles interviewed him, as well as general automotive sites and mainstream news outlets. Benoit was the first to accomplish something that the naysayers had long said was impossible.

Another thing stood out: the color of his skin. After all, African American automotive YouTubers are few and far between. With his increased visibility, the racist comments still arrived, but he dealt with it by pinning the worst ones to the top of the comment section, just like in medieval times when warlords would cut off an enemy’s head and stick it on a post at the entrance to the village as a warning to others. According to Benoit, this reduced racist comments by about 80%.

Another threat came from Tesla drivers who felt the company and its CEO Elon Musk could do no wrong. When Benoit criticized the company for not selling parts to owners, rabid fans — dubbed the Musketeers — flooded his page with negative comments, accusing him of polluting the Earth or stealing money from the company because he fixed his own car. As was the case with racist comments, he pinned the most egregious comments to the top and tried to let it slide off his back. After all, big life changes were in store.

His income from YouTube ads and sponsors had increased, and he had solved his parts issue by buying a few more salvaged Teslas for parts and selling the ones he didn’t need. The Electrified Garage was about to launch in Seabrook, so he quit his job in the spring of 2019 and didn’t look back. 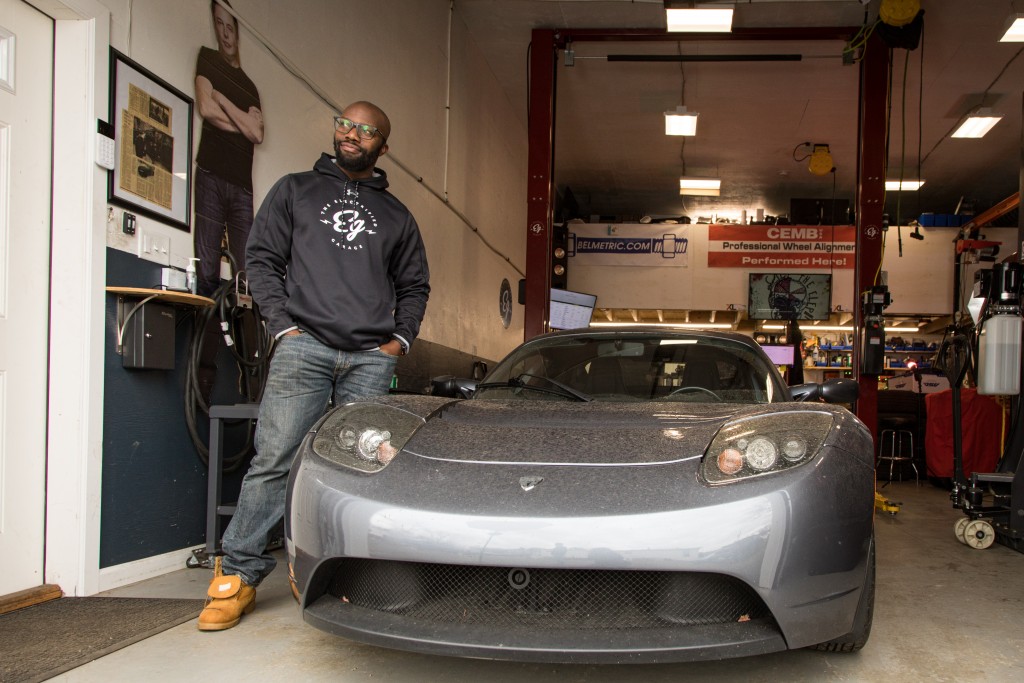 Benoit stands next to a 2008 Tesla roadster, the first model the company produced, as a cardboard Elon Musk looks on. For more information, visit electrifiedgarage.com. Photo by Kendal J. Bush

However, working on Teslas started to bore him. Even though Benoit had built the channel and his brand by catering to EV enthusiasts, something had to give. He was also tired of dealing with the Musketeers and other critics.

Last summer, he announced on his channel that he was going to start rebuilding gas cars in addition to EVs. A boatload of viewers unsubscribed, but the number of new fans more than made up for it. Besides making hundreds of thousands of people laugh and learn about how to work on cars, Benoit’s efforts have garnered real change, both at the company and government level. A revised Right to Repair law in Massachusetts was passed in November 2020, compelling Tesla to provide owners with tools, parts and technical information to fix their own cars.

Benoit often calls upon several New Hampshire businesses for help; he gets his salvage vehicles from Argo, a salvage dealer in Raymond, and TMS Diesel in Weare is helping with his newly acquired 2009 GMC Sierra Duramax. And he has no regrets nor plans to change as his audience continues to grow.

“People like me because I’m goofy and quirky, and because they can learn something while watching one of my videos,” he says. “I’m an Everyman, not an engineer. I break stuff all the time and make tons of mistakes. There are a bunch of new Tesla rebuild channels with people who are younger than me, smarter than me, and better-looking than me, and I’m okay with that. I feel proud of what I started.”