Raptor Rehab On The Wing in Epping

Jane Kelly has turned her Epping home into a refuge for all creatures of the sky. At On The Wing, injured hawks, owls, crows and even the much-maligned vulture are given a second chance 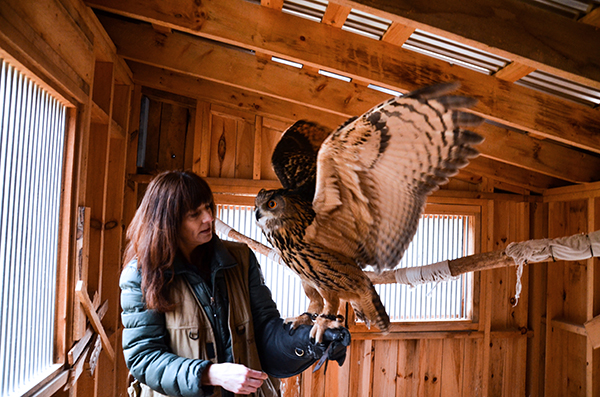 Jane Kelly with Lila, a Eurasian eagle owl. Lila is native to Russia and therefore seems quite comfy with New Hampshire’s colder weather.

Jane Kelly’s house has an unusual watchdog. Edsel, an African pied crow, has learned to imitate a house cat.

“He’s imprinted; he thinks he’s human,” explains Kelly while her crow caws at us from a cage that takes up most of one wall. “He was calling 24/7, so I made a cage, and he lives in the living room.” Kelly has been rehabilitating birds of prey for six years and running the Epping-based rehab center On The Wing for three. “I’ve always loved birds,” Kelly says. “My dad is a big outdoorsman, and I would go with him hunting and fishing, so I grew up in the woods exploring.” After moving 10 dead owls off of Rte. 101 over a two-month period, she decided to turn her house into a rescue. “I just felt like I needed to get involved somehow.” 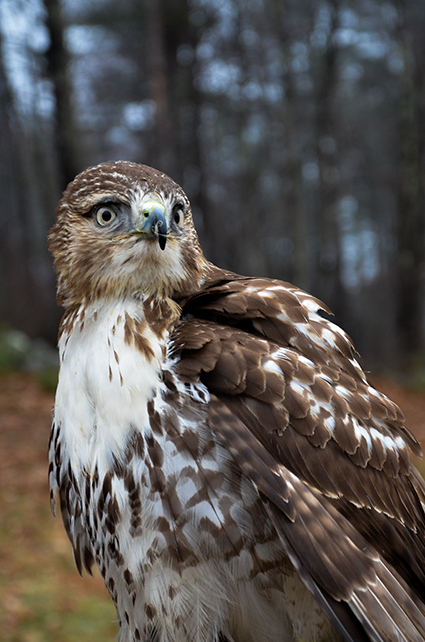 Her first patient was a barred owl that had been hit by a car. “They have big black eyes like they’re looking into your soul. They’re very docile.” Kelly has seen cases of West Nile virus, lead poisoning and gunshots among the birds she finds, “but I’d say 90 percent of them are hit by cars.”

“The key is for us to not litter,” Kelly explains. People assume it’s harmless to throw biodegradable foods out of car windows, but small animals are drawn to this litter, and birds of prey are drawn to those animals. “When a bird’s hungry, it’s called a state of yarak,” Kelly adds. “There’s nothing that’s going to get between them and that prey, and I think they get blindsided.” The result is road kill, which only continues the cycle by tempting scavengers.

Kelly says that birds are everywhere; people just aren’t looking for them. “When I’m driving at night, I’ve seen a mouse run across the road — and something’s following that.” Human beings aren’t targets for aerial predators, so it’s in our nature to look down at the ground. But Kelly has trained herself to be an exception. “I’m always looking to see other birds. That’s all I do. I trip in the woods because I’m always looking up.”

Edsel is not alone in Kelly’s house. Guthrie is a shy barn owl whose features make him look almost human. As Kelly enters with him on her glove, he makes a crackling noise like static. “Isn’t that like a radio station tuning in and out?” she asks. But the soft clicks and hoots Guthrie is making are only a small sample of his vocal ability. “When owls scream, they sound like cats, they sound like dogs, they sound like monkeys.” Kelly imitates the owl calls for us while Guthrie stares at her.

“You don’t have a relationship with them like a parrot,” Kelly adds, emphasizing that birds of prey are not pets; they are weapons first. “You treat them the same because you know they’re both unpredictable. The same rules apply — when I have my birds, I’m always between the weapon and the person,” Kelly says, adding, “It’s all about respect.”

Kelly’s move towards falconry was an inevitable progression for her. “I took it up for two reasons: for the sport of hunting and then also for learning how to condition and get these guys back when they’re releasable.” Hunting with her birds not only teaches her more about their behavior in the wild, but it keeps her alert. 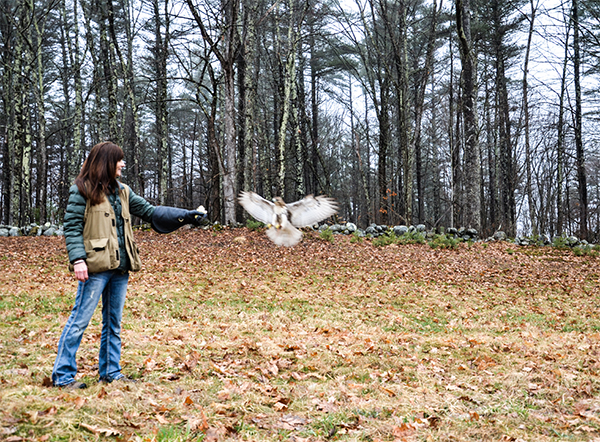 “It’s like having a Labrador in the sky.” Only chasing after a hawk is a lot more complicated. “You run through the woods with your head up, smacking into trees; you look like you’ve been in a bar brawl.”

Kelly hunts with Ellie, a Harris’s hawk, and a red-tailed hawk named Fergus. Fergus is an adolescent and has a few qualities of a gangly teenager still; he hasn’t quite grown into his face and so looks a little cross-eyed.

Outside, she demonstrates commands. “To that oak tree,” she says. She lets go of Fergus’ lead and he spreads his huge wings, leading with his feet towards the branch she points to. “Their feet play a big role in their movement and how they move through the woods.”

When Kelly calls him back, Fergus makes a huge arc down to her arm. “Good boy!”, Kelly coos to Fergus as he rips apart the meal she offers him.

Before flying her birds, Kelly has to weigh them: “There’s a window of where you can fly them and where you can’t.” Falconers train their birds extensively, but they can’t control them without the device of hunger. A satiated bird might take off and not come back for a while. Kelly gives her birds food as a reward for flying back to her, which, in a bird’s eyes, makes her its food source. A bird that isn’t hungry enough to eat therefore might not come back — at least not until it gets hungry again. When that happens, she says, “You sit and sweat and pray that they come back. It always happens when you have to go somewhere. It never fails.” 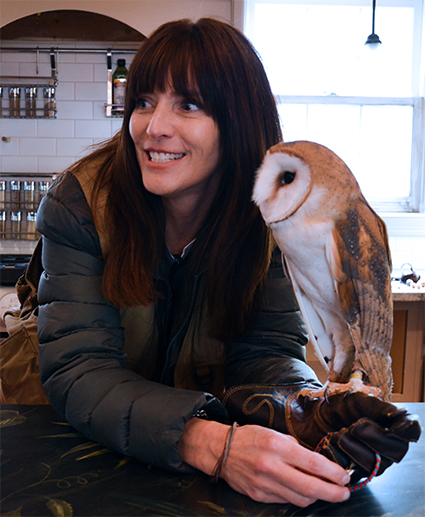 Kelly feeds her birds mice, rats, quail, day-old chicks, fish from the market and even squirrels. “I feel like I handle so many dead things. I was at a store and I dug in my pocket and there was a dead mouse. I just pushed it aside and you could see [the cashier] was horrified,” she says, laughing.

Outside, Kelly’s sprawling back yard is dotted with large, wooden houses for the birds: “I just kept building one at a time as I got a bit of money.” On The Wing is currently home to three injured birds and 10 birds that Kelly uses for education, traveling around the state to teach schools and scout troops how to help protect birds of prey from human influence. They came from Audubon Societies, NH Fish and Game or captive bred programs, and many of them imprinted on people when they were only chicks — which means that they are too comfortable around humans to be released back into the wild.

One of these birds is Erchie. Vultures are not the most popular birds, but when Erchie  eagerly waddles out of his house and looks up at Kelly, it’s hard not to be amused. Kelly speaks to her birds in a mixture of commands, hoots and whistles. “Can you show your wings? Good job! We’ve been working on that, haven’t we?” With his long, skinny neck and curved beak, Erchie appears almost bashful.

As we returned Erchie to his cage, piercing screams came from the neighboring one. A falcon’s scream is bone-chilling; it lends a flesh-and-blood realism to the primal word for their classification: raptor.

The source of the noise is Voodoo, named for a fighter jet from the Korean War. Half peregrine and half gyrfalcon, Voodoo was inherited from another trainer. Kelly says, “I’m lucky, because the guy he came from is an amazing falconer, but sometimes you get somebody else’s mistakes.” The hawks she has flown stay much lower than falcons, so training Voodoo will be a whole different experience.

“We use a kite to train the bird to fly up in the sky and then we use a lure to bring the bird down,” she says. 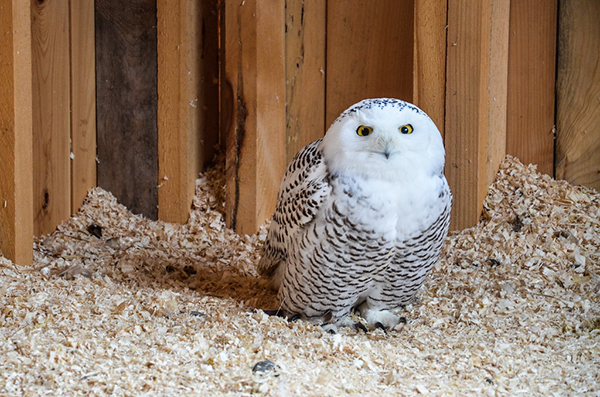 A snowy owl in one of the out-buildings Kelly built.

Entering the owls’ roost is a different experience. It’s quieter, and we’re allowed to go in to see the inside of their wooden fortress. Lila, a Eurasian eagle owl, is native to Russia and seems to be quite comfortable in the chilly New Hampshire spring. “I got her when she was just a little owlet,” Kelly says fondly. Working with Lila, Kelly whistles non-stop, almost as if the two are having a conversation. Lila responds with little scratchy noises reminiscent of a cat, which sounds absurd coming from the huge bird.

Despite her sweet demeanor, though, Lila and the other owls are, first and foremost, wild animals. “If someone brings me a baby bird, I usually try to re-nest it,” says Kelly, but sometimes the parents intentionally choose to eject their young. “It’s a fine line: Are you putting the gene out there that the parents were trying to control?” Places like On The Wing intervene to protect wildlife, but sometimes that intervention itself can be harmful. “I know it sounds really cruel, but it’s a cycle. The strong will survive. I think sometimes we need to learn to respect that,” she says.

Cold wind drives us back towards the house, but Kelly pauses and looks up at the tree line of her property. “Do you hear the crows right now?” As always, she has her eyes and ears trained on the sky.

She has been running On The Wing for three years and credits its success to volunteers, especially Erin Rooney, who has been with her since the beginning. She funds On The Wing out of pocket with help from her educational programs and private donations. Contact her at jjanekelly@comcast.net for more information about how to get involved.

Little Round Top
Hawkwatchers have counted the critters from this White Mountains spot since the 1960s. New Chester Mountain Rd., Bristol

New Hampshire School of Falconry
The team at this federally licensed falconry school offer everything from educational demonstrations (for those who’d rather let the pros handle the birds) to one-on-one field hunts. 183 Deering Center Rd., Deering. (603) 464-6213; nhschooloffalconry.com