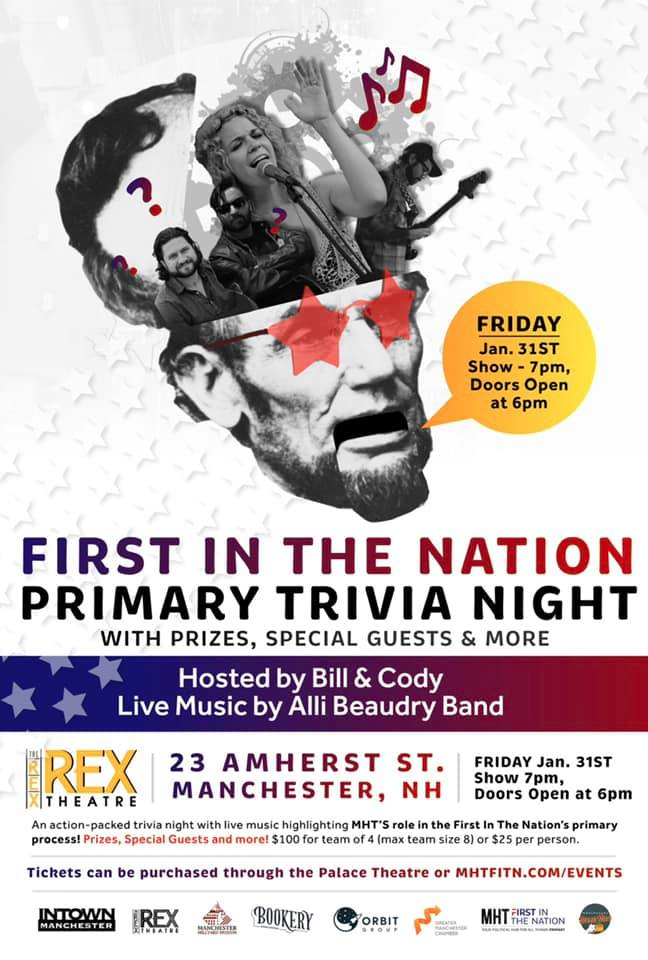 We just published a story by photojournalist Elizabeth Frantz on first-in-the-nation primary superfans, but we realize not everyone approaches the season of visiting presidential hopefuls with such enthusiasm. Hate it, love it, or merely tolerate it, New Hampshire has reached 100 years of first-in-the-nation status. An important milestone to be sure, but it’s not exactly most people’s definition of fun.

Enter the guys behind the eponymous Trivia Night With Bill & Cody, Bill Seney and Cody Booth, who are working with the newly opened Rex Theatre in Manchester (run by the Palace Theatre) to bring you First-in-the-Nation Primary Trivia Night, which promises “An action-packed trivia night with live music highlighting Manchester’s role in the first in the nation primary process.”

Special guests are expected, prizes will be awarded and knowledge will be tested. Plus, enjoy live music by the Alli Beaudry Band and the chance to check out an exciting new venue if you haven’t had the opportunity to do so yet.

Get There
January 31, 7 p.m.
The Rex Theatre
23 Amherst St., Manchester
Tickets can be purchased here.

Full disclosure, some of the New Hampshire Magazine staff and our McLean Communications coworkers are semi-regulars of Trivia Night With Bill & Cody, but that only means that you can trust our recommendation — it’s a really good trivia night. Add in a dose of history, live music and whoever those mystery guests might be, and we think this will be a great evening out.

Teams are capped at eight participants, so no creating super teams. The cost is $25 per person, or $100 to sign up a team of four. Doors open at 6 p.m. and the fun gets underway at 7 p.m. We’ve started forming our team, and we look forward to the competition!