How well do you know New Hampshire? 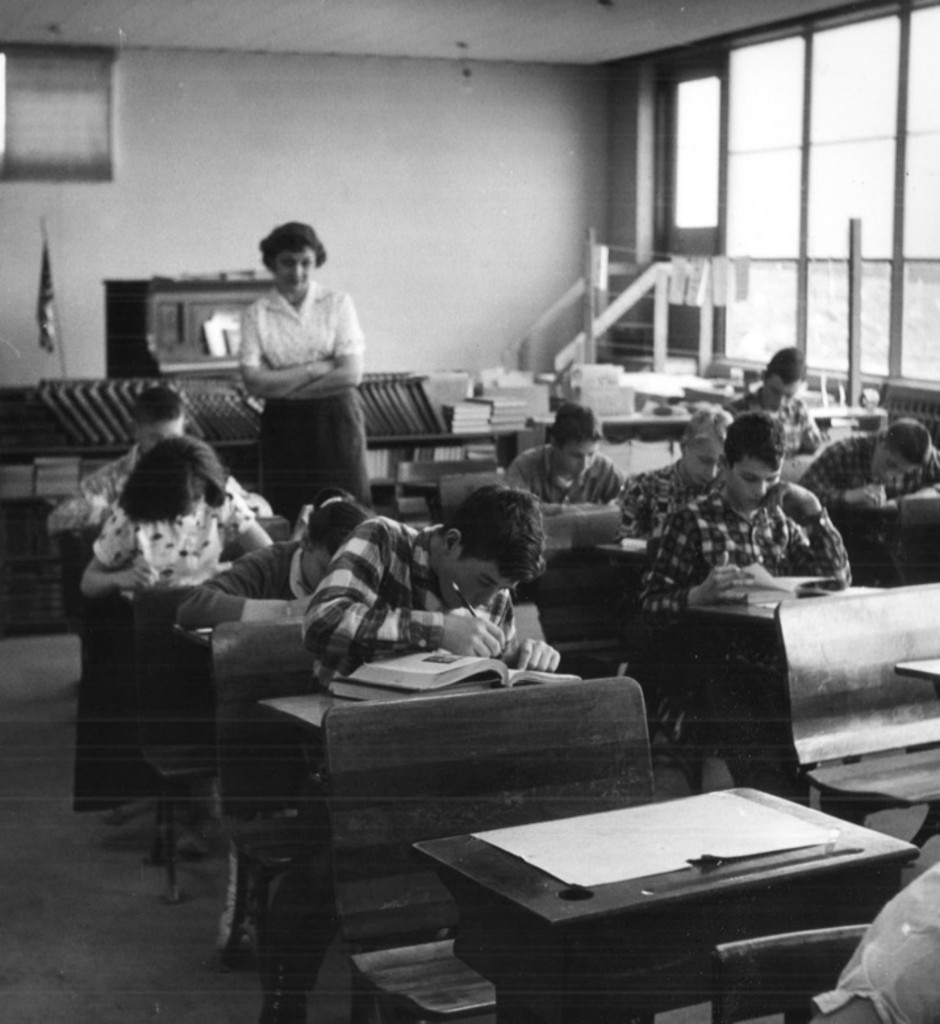 Remove everything from the top of your desk except for a properly sharpened No. 2 pencil.” If those words don’t strike terror into your heart, then you didn’t have Mrs. Smith for 10th grade New Hampshire history and civics class. Although her class was terrifying, she was an effective teacher, and to this day my brain is still full of New Hampshire facts that will come in handy if I’m ever selected as a contestant on a New Hampshire game show.

I attended 10th grade during the dark ages before computers and calculators were invented. That meant you had to memorize things as you couldn’t just look them up on the phone in your pocket. Mrs. Smith had been teaching since the dinosaurs roamed the earth and her reputation for surprise quizzes preceded her. My mother and aunts and uncles had had Mrs. Smith for this very same class. “Pay attention to the nuance details and always take a guess” was the forewarning advice they had given me. Mrs. Smith scored her quizzes based on the number of correct answers and therefore an incorrect answer wouldn’t count against you. A wild, stab-in-the-dark guess not only didn’t hurt your score when wrong, but you might actually get lucky and hit on a correct answer.

“In recognition of President’s Day this month, this quiz will examine how well you know New Hampshire and your presidential history,” Mrs. Smith said as she laid a sheet of paper face down on each desk. “This will be a closed book exam and there will be no talking.” “Write only your last name and today’s date in the upper right-hand corner. You will have 10 minutes to complete the quiz. You may begin.” I flipped the paper over and read, “How many N.H. towns, cities or unincorporated townships share the same name as a U.S. president? List as many as you can on the lines provided below.”

Suffering succotash. To ace this quiz, I’d have to be able to think of every single city and town in the state and then cross reference them against every single president, all in 10 minutes without any source material. “I’m doomed,” I thought, as my mouth went dry and everywhere else stared sweating. I glanced up at Susie Smartypants who was scribbling away furiously as though this was easy and there were hundreds of names to be quickly written down. “Keep your eyes on your own paper, Mr. Hudson,” Mrs. Smith said menacingly.

Washington and Lincoln were obvious choices for presidents in the month of February, and I remembered that the Kancamagus Highway runs from Lincoln to Conway. So, I nailed down Lincoln right away. And isn’t there a town named Washington with the nice lake over in the next county? Got two! And isn’t there an iconic covered bridge up in Jackson? Or is it in Jefferson? Doesn’t matter, I’ve scored two more.

In the 4th grade, I’d had to memorize the Gettysburg Address, the state capitals, and all of the presidents in order. I’m running through the list in my head now and clicking them off … Washington, Adams, Jefferson, Madison, Monroe, John Quincy Adams, Andrew Jackson, Martin Van Buren … hold on … didn’t they build a big power production dam across the Fifteen-Mile-Falls section of the Connecticut River up in Monroe? So then, Monroe would count. Wahoo, I’m up to five now and straining my brain to think of any more. Madison also sounds vaguely familiar. Isn’t there a big Madison Boulder up in the White Mountains somewhere? Maybe the Madison Boulder is in the town of Madison and then that would count. Remembering the advice that it doesn’t hurt to take a guess, I write down Madison for number six just as Mrs. Smith orders, “Pencils down, pass your papers to the front.”

How many did you get? Most of the class had between two and four, a few had listed five. I was leading the pack with my tentative six and feeling pretty smug until Mrs. Smith encouraged us to examine the question more closely. The question did specifically make mention of unincorporated townships. Atkinson and Gilmanton Academy Grant, the Second College Grant, Low and Burbank’s Grant, Pinkham’s Grant, Green’s Grant, Bean’s Grant, Cutt’s Grant and Dix Grant all share the same last name as President Ulysses S. Grant, so you’d have to add eight more onto the answer list. Nuts.

The question did not specify that it must be the president’s last name, only that they share an identical name, so would not Franklin, N.H., and Franklin Pierce, Warren, N.H., and Warren G. Harding, Chester, N.H., and Chester A. Arthur also count as correct answers? Mrs. Smith thought so, and that brought the total up to 17. My smugness had vanished as my count of six was starting to look inadequate. Nestled between Gorham and Jackson on Route 16 is the tiny metropolis known as Martin’s Location. A perhaps generous interpretation of the first name rule could mean that maybe we include President Martin Van Buren on the answer list as well.

“Any others?” Mrs. Smith asked. Billy Brave suggested Adams, but Mrs. Smith told him he was in the wrong state and lost. “Bartlett?” suggested Teresa with no H, as opposed to Theresa with an H, who was keeping her head down to avoid being called on. This guess earned the dreaded Mrs. Smith scowl. Josiah Bartlett is a fictional U.S. president on the “West Wing” TV show, but his name comes from a New Hampshire statesman who signed the Declaration of Independence. Bartlett was never an actual U.S. president, but he did play one on TV. Mrs. Smith didn’t like that answer and scowled some more.

Susie Smartypants had been in the same 4th grade class as I had and had also memorized the presidents in order. Knowing that the correct answers would all have to be U.S. presidents and that wrong answers would not count against her, she simply reverberated the entire list of presidents onto her paper and therefore got credit for the Franklin, Warren, Chester and Grant. Names that no one, including her, had thought of. The best answer is between six and 18 depending on how you interpret the question. Or 19 if you can prevail on the argument that the question isn’t worded specifically enough to exclude fictional U.S. presidents. Yes, sometimes it doesn’t hurt to take a wild guess and you always have to pay attention to the nuance details. 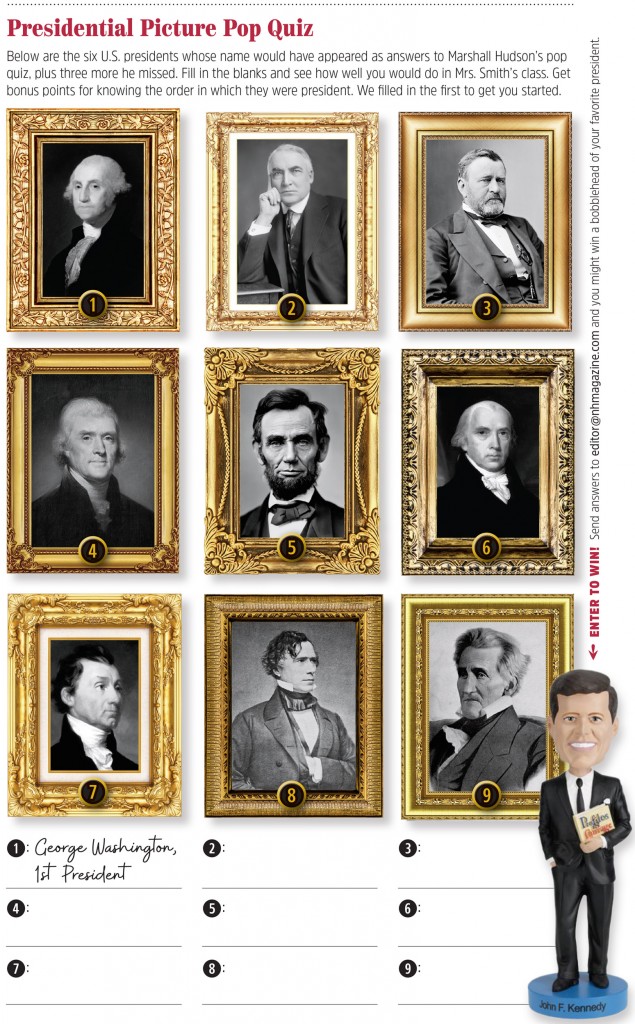