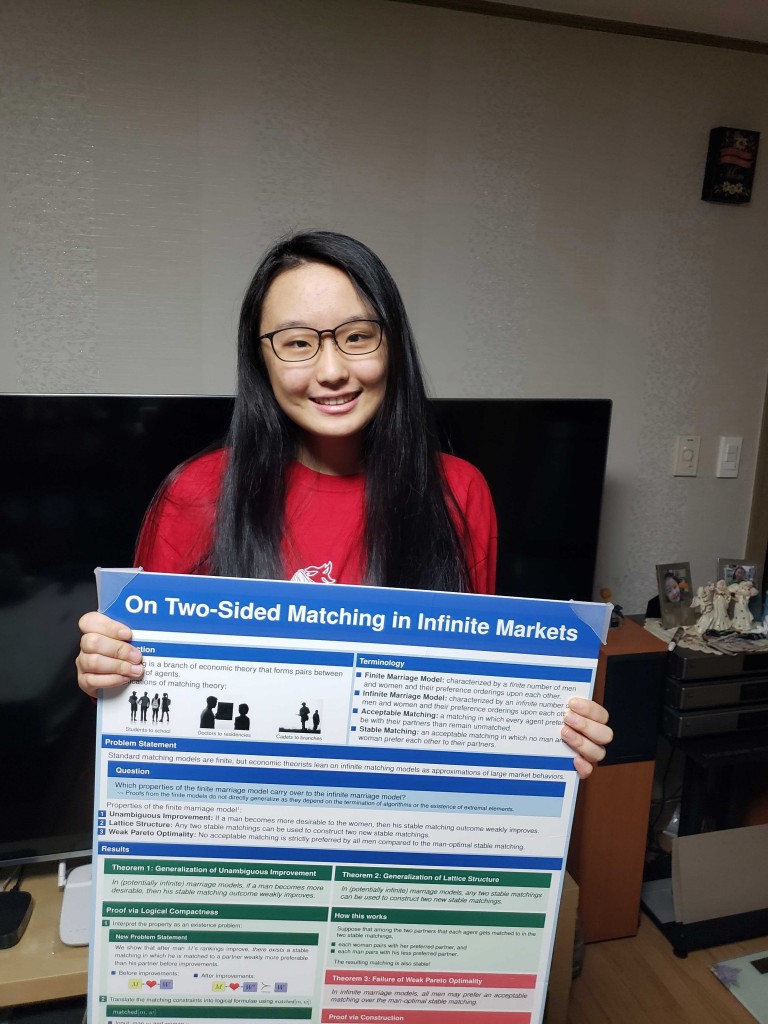 This isn’t what Yunseo Choi expected her senior year of high school to look like.

Instead of spending it on the campus of Phillips Exeter Academy — where she’s led the math club and the Girls in STEM (Science, Technology, Engineering and Math) Club, and DJs for the school radio station — the coronavirus pandemic has kept her at home with her family in South Korea. She’s still able to take virtual classes, though that’s also meant adjusting her schedule to keep up with the 13-hour time difference.

“I live nocturnally, mostly,” she says.

Despite those disruptions, Choi recently claimed the top spot in a prestigious national STEM competition, the Regeneron Science Talent Search, backed by Regeneron Pharmaceuticals Inc. and the Society for Science. The honor came with a $250,000 prize, which Choi is planning to put at least part of toward her college education. It also came with plenty of national media attention from the likes of Axios, NPR and more.

In her winning project, Choi set out to explore “matching theory,” which is used in lots of contexts: pairing students to schools, doctors to medical residencies, or even in virtual dating apps. But she wanted to tackle this from a new angle.

Studying those infinite possibilities, she says, can help to better understand the behaviors of real-world markets where the options are more limited. This kind of research is still pretty theoretical, she cautions, but her project did help teach her another more immediate lesson: “Not to be daunted by the methods behind significant problems, but rather chase problems depending on their significance and just learn the methods along the way.”

Choi credits her Exeter experience with preparing her for the competition’s intensive judging process, which included several rounds of interviews in addition to detailed written reports. The school prioritizes learning through discussions rather than lectures, and Choi says that made it easier to talk at length about her project and how it fits into STEM issues more broadly.

“Having that training every day in classes really helped me formulate my thoughts on the spot,” she says.

And as someone who’s had to navigate largely male-dominated spaces in pursuit of her mathematics research, she hopes her achievements can also help show more girls there’s a place for them in this field.

“Just being a girl, growing up in classrooms with older guys, a lot of times I think it almost defined my personality in some ways,” Choi says. “When I’m, for example, listening to a lecture, it doesn’t work if you’re just passive, just listening — you have to take that initiative to voice your opinions out, voice your questions out.”

From here, Choi will keep voicing her questions and opinions at Harvard University, where she plans to study mathematics in hopes of eventually working in academia. If you ask us, the possibilities for her are endless.