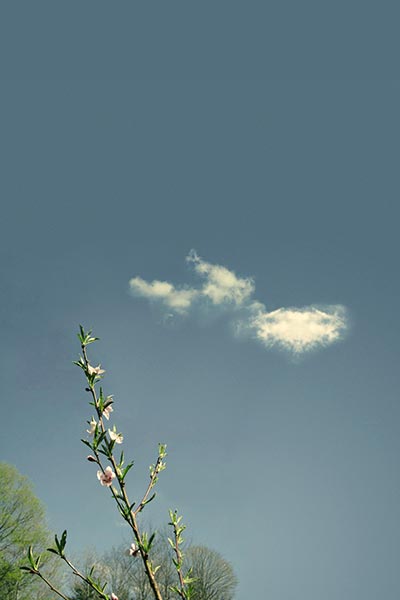 A tree reaching for the sun Original photo by Susannah colt; photo illustration by Sequoia Porter

For fifty years on our craggy hillside farm in central New Hampshire ornamented with Stonehenge-style boulders we raised horses and took in shelter dogs. Now all the animals are gone but the vegetable garden we maintain on one of our only bits of flat land persists. Four summers ago, working aged compost and ancient manure into our raised beds, we uncovered among the clumps of earthworms and tattered bits of eggshell two unknown sprouts about eight inches high. They didn’t resemble any of our common invaders. Curious, we dug down to expose the roots. There they were: two peach pits cracked open by Nature and straining for the light of the New World.

Anything that had lain fallow underground for over a year deserved some support. We potted them, brought them down to the house and gave them pride of place on the southeast-facing brick terrace where red peppers thrive year after year in old muck baskets. When the fall frosts came, we took our cosseted trees in at night. Winter days when the glassed-in porch temperature rose above 40 degrees they reposed on a bench in the sun. They prospered with all this attention. By spring they were begging to leave their pots.

We planted them ceremoniously on either side of the garden, both in full sun, at least until mid-afternoon shade from the adjoining forest overtook them. Although they appeared to thrive in their new location, it gradually became apparent that the one closest to the pond overflow was no longer looking thrifty. The soil proved too wet for the little one; in July it drooped, lost its leaves in August and succumbed before Labor Day.

At this point I thought it might be useful to consult authorities on the Internet. Had other people had this experience? Or, if they had a spare pit or two, how should they proceed? The amount and variety of information available was staggering. Eat the fruit. Save the center pit. Scrub pit gently with warm water and soft brush to remove any flesh still clinging to it. Dry pit for about 10 days. (It takes longer for larger pits to dry.) Chill pit at a temperature between 35 and 40 degrees. Refrigerators are ideal for this purpose because they consistently control the temperature within this range. An ordinary sandwich bag may be used for this purpose after you punch a few holes in it. Chill peach pit for 90 to 105 days.

“Anything that had lain fallow underground for over a year deserved some support. We potted them, brought them down to the house and gave them pride of place.”

How lucky we were that Nature had taken care of all these preliminaries. Directions followed about potting the sprouted pit, growing it indoors, setting it out in the earth when it was eight to 12 inches high. Then: Beginning in the second year, fertilize your peach tree in the early spring before leaf and bloom set and fertilize again in the fall after the leaves have fallen off the tree. Bloom set? In its second year all we had was a little skinny sapling standing alone with its sparse leaves shining in the sun. It was unfertilized but looked healthy. There was no sign of blossom. Did this mean our tree was sterile? Never mind; we cherished it for having survived this far.

When your fruit tree is about two years old it will need to be supported with stakes until its center trunk is strong enough to withstand the wind and the rain in your area. That hadn’t occurred to us. Nevertheless, the “center trunk,” spindly and smooth, stood straight and true. On April 20th of its fourth year, the tree burst into bloom. The word “burst” is no exaggeration; overnight, blossoms appeared. They looked fragile but withstood an afternoon thunderstorm and accompanying wind. Our peach tree had reached adolescence. Not a moment too soon, we staked it. Three odd little swellings, ovoid, green, somewhat fuzzy-looking, formed. Peaches-to-be!

into yogurt, over ice cream, or best of all, eaten in hand, juices cascading down chins and shirt fronts. But we are warned to be realistic. It is likely the peaches that come from this pit will not greatly resemble the original fruit. This is because most fruit trees have a different type of rootstock grafted onto them and the seed will revert to the original stock.

Never mind. We hereby promise to hold dear whatever peach comes forth from our three babes on the branch.