Live free and prosper in the Granite State 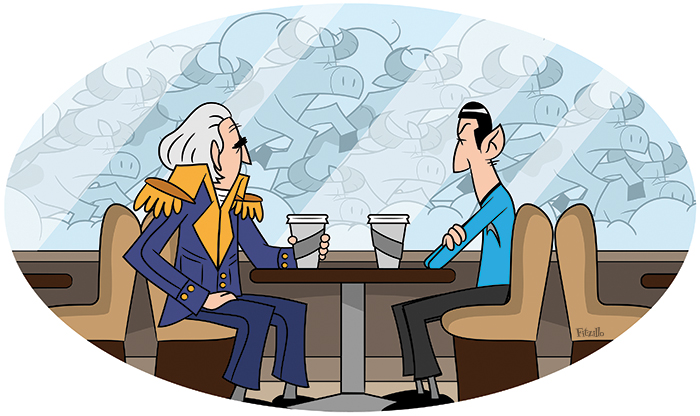 Live Free or Die” is a great slogan. So is “Live Long and Prosper.”

Do you think General John Stark and Mr. Spock would mind if I melded their legacy quotes into “Live Free and Long”? This works better for me as I take stock of threats to my life as a Granite Stater.

Actually, as I look back, I should’ve been dead many times over. For example, I’ve been flossing with a product found to contain PFAS (perfuoralkyl to you and me), but Oral-B makes flossing a breeze, and my teeth are tightly packed in my jaw. I’ll ask my dentist if he suggests I instead gnaw on my dog’s Milk-Bone dental chews for tartar removal. Until then, I’ll keep flossing, considering the alternative is having my friends call me Mr. 7-10 Split when I open my mouth.

I just bought a house in Nashua and opted not to include radon testing as part of the home inspection. I’m rolling the dice since 35 percent of homes in Hillsborough County have levels exceeding the safe threshold, but that means two-thirds do not. Considering that, while I was in Las Vegas last year, I picked The Pats and Rams to play in this year’s Super Bowl, I’m feeling pretty cocky that radon doesn’t dwell in my basement.

Do I have an Evel Knievel disregard of danger? Maybe. I drink one iced coffee from Dunks every day, despite warnings that consuming four of those daily can lead to premature death. So, mathematically, I only have a 25 percent chance of an untimely passing with my daily Dunks, which I will never give up. Live free and caffeinate.

It also seems like I’m tempting fate simply because I enjoy an occasional California wine. Last year, someone found that 10 out of 10 wine samples contained glyphosate, the herbicide found in the weed-killer Roundup. Good to know. If my Sonoma Valley bottle of chardonnay goes bad, I can assassinate the dandelions growing in my sidewalk cracks with it. Another reason to drink New Hampshire-grown wines.

Doctors warn that too much unprotected exposure to sunlight can be a problem. I’m not concerned since, on average, New Hampshire gets about 4.5 days of sun every year. I chuckle at homes that have solar panels on the roofs. What are they powering, their electric toothbrushes? There’s probably not enough juice to power the wine fridge that holds their bottles of Roundup chardonnay.

Did you know about 22 people are done in by angry bovines nationally each year? Our shrinking dairy industry is a buffer, so if you want to avoid the clear and present danger of being killed by a cow, avoid crossing the Connecticut River to Vermont.

It’s no wonder that our state frequently pops up as a Top 5 place to live: Clean wine and no Ayrshires with attitude. (Or maybe we just don’t floss enough?)