A note from New Hampshire Magazine: Due to the governor’s stay-at-home order and efforts to lessen the spread of COVID-19, many of the following places are either temporarily closed, or officials are asking that you avoid them for the time being (parks, crowded trails and other popular outdoor areas). In the meantime, we hope this guide enlightens, entertains and provides plans for the strangest road trip ever when we can once again safely travel our (weird) and beloved Granite State. Stay safe, and stay healthy! 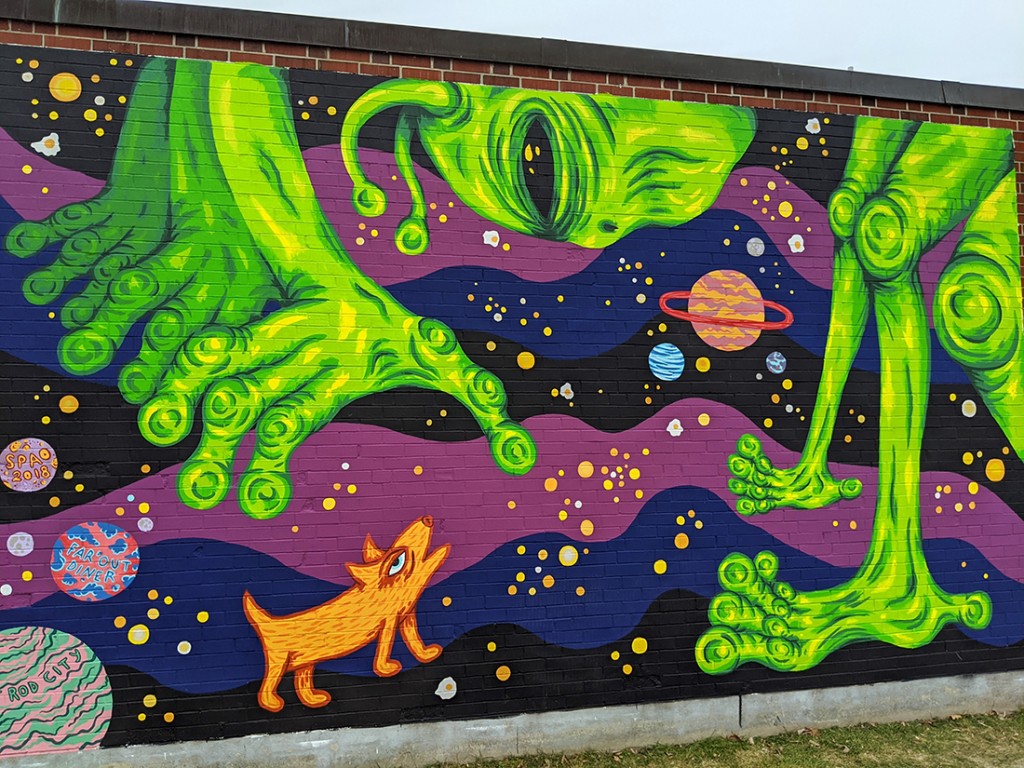 The extraterrestrial mural on the Far Out Diner in Dover Photo by J.W. Ocker

New Hampshire hides its strangeness better than most states. You’ll hear about our stunning mountains, lakes and forests first. Our insistence on prominence in the national political process. Our license-plate-worthy self-reliance. We’re a bedrock of a state. But when you lift up rocks, you usually find something weird hiding beneath. And we’ve got a lot of rocks. We’re the Granite State.

New Hampshire is big in the universe. The Betty and Barney Hill abduction and the Exeter Incident both happened here. But if you want your exploration into the alienness of the state with a side of hash browns, visit the Far Out Diner. It’s a small eatery that serves breakfast and lunch and is festooned with extraterrestrial bric-a-brac. From the otherworldly mural on its exterior to the pop culture artifacts inside, you’ll get your fill of both food and flying saucers. 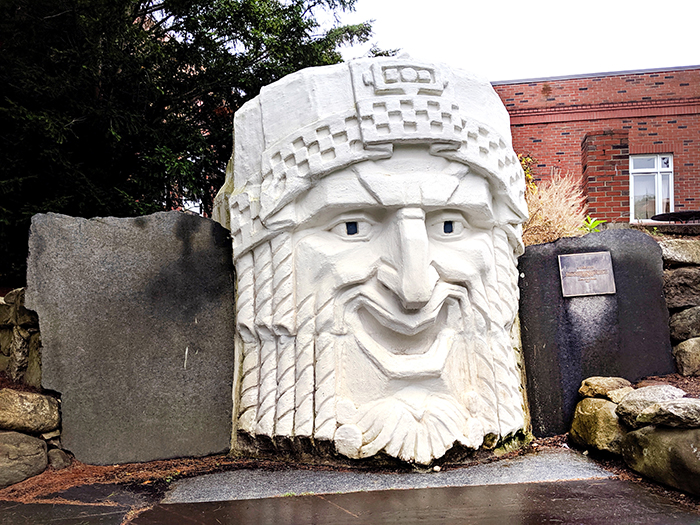 New Hampshire has a fondness for a good stone face. And, since we lost our favorite, we’re always looking for our next. I’d nominate the 8-foot-tall stone face on the grounds of Saint Anselm College. It depicts the Greek muse of comedy and has also, in its own way, fallen off a mountain. In 1929, it adorned the apex of the art deco façade of the State Theater in Manchester, where it laughed for decades above the city until the theater was torn down in 1978. 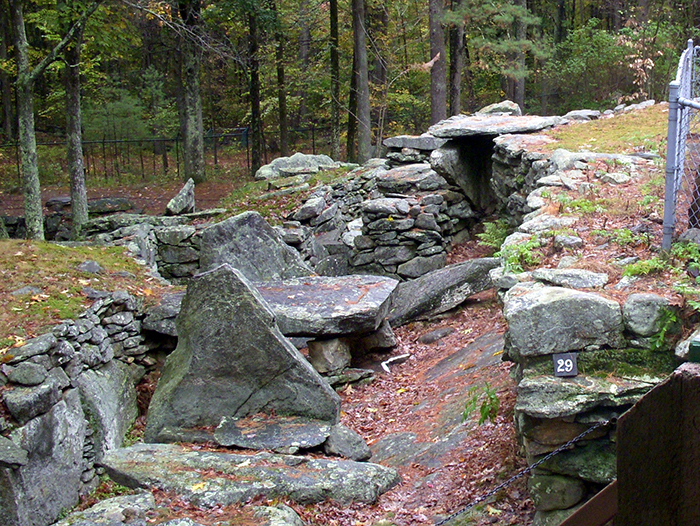 You won’t find a more controversial stack of rocks in the entire state and, possibly, the country. This bump of land, called Mystery Hill, is located in the forest of Salem. Atop the “hill” is a complex of granite blocks configured into passageways, sunken chambers, and other rough structures. Its origin is unknown, but theories stretch from Native American astronomers to pre-Columbus Europeans to Colonial farmers to 20th-century hoaxers. Today, it’s a paid attraction touted as America’s Stonehenge, and, while not to the scale of its namesake, still offers plenty of strangeness.

New England may be unique in the country for its historic cemeteries, but New Hampshire’s unique in New England for its horse cemetery. In 1889, Eli Wallace gave his wife Myra two bay Morgans named Maud and Mollie. The horses became more family than livestock, and, when the horses died in 1919, they were buried reverentially on Wallace’s land. After Myra’s death, Eli got another horse, Maggie, for company. She eventually joined the other horses beneath gravestones in a small spot, which is still maintained thanks to Eli’s will. Weird, but sweet. 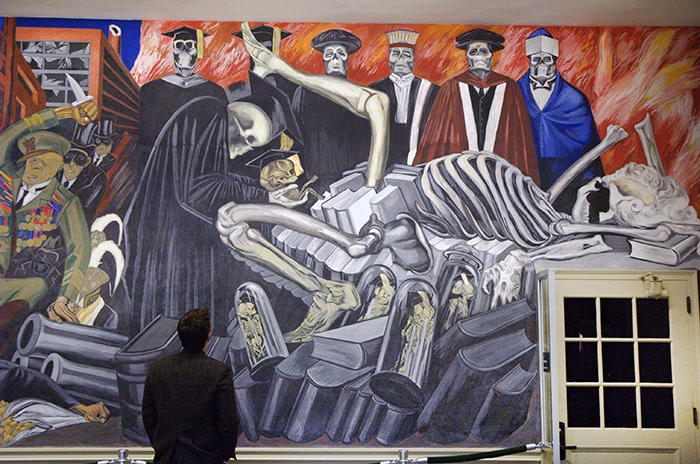 Can you read with music playing? In crowds? What about surrounded by a grisly tableau of gods and monsters? In the library at Dartmouth College, a mural painted by José Clemente Orozco in the early 1930s wraps the entire room, depicting a history of North America, from its indigenous peoples to its European colonization and then industrialization. But it does so weirdly, with such imagery as a pregnant skeleton giving birth, a human sacrifice, a sea of snakes and other strangeness. Apparently, the paintings are allowed to be loud in Dartmouth’s library.

You may think of carnivorous plants as exotic jungle things, but New Hampshire’s got ’em. Sundews. Pitcher plants. Bladderworts. We even lay down boards across mucky swamps so that we can see them. Ponemah Bog is once such place. A short looping trail wends through forest and swamp and all three types of plants. Most prominent are the pitcher plants, cone-shaped traps that slowly digest the insects who fall inside. During spring, they’re bright green. In fall, an ominous red.

New Hampshire has the country’s shortest ocean coastline, but what it lacks in beach it makes up for in drowned forests. It has two: one off Odiorne Point and another off Jenness State Beach. Most days, the only evidence of these watery woods is the historic sign denoting their existence. However, at just the right low tide, you might see the seaweed-covered stumps of cedar and pine dating back thousands of years.

This majestic arch on a hill looks like a memorial to an important event, but really it’s the empty grave of a rich man. Charles Tilton made millions on California gold in the 1800s, had his hometown named after him, and knew the perfect spot for a self-aggrandizing tomb — on a tall hill outside of Tilton. Thinking he could annex the property, he built a 55-foot-tall, 40-foot-wide stone arch above a lion-topped sarcophagus. When he didn’t get the hill, he settled for a humble grave in Tilton, leaving the empty tomb as a great shady spot for a picnic.

Benson Park has everything you want in a park. Nature trails, a playground … a gorilla cage. The 165-acre Benson’s Wild Animal Farm opened in the 1920s, and featured everything from giraffes to alligators to a 500-pound gorilla named Colossus. It lasted in various forms until 1987, when it closed and rotted into spookiness. In 2010, Hudson reclaimed it as a public park that maintained features of its previous life, including the gorilla cage, the elephant enclosure and a building shaped like a shoe.

The short-lived town of Monson was founded in 1737 and abandoned in 1770 due to limited resources. The ghost town is now a park, where the roads that once bore horse-drawn wagons are now walking trails through the woods. Scattered throughout are stone fences and cellar holes marked by signs proclaiming the names of those who once lived there.